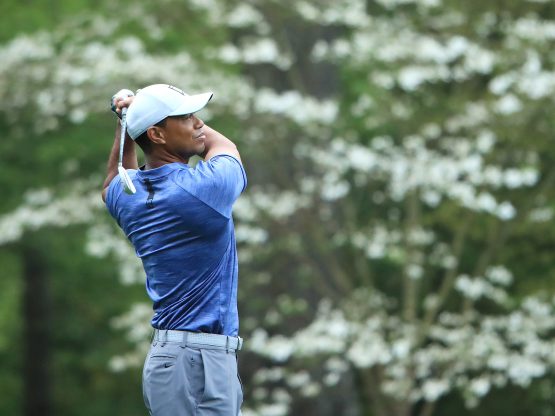 Tiger Woods won the Masters on Sunday, capturing his fifth green jacket and 15th major title — his first in more than a decade — in one of the most stunning turnarounds in sports history.

It was the first major title since 2008 for Woods, once golf’s most dominant figure until a high-profile sex scandal, divorce and multiple injuries led to a very public fall from grace. There were occasional doubts about whether he’d even continue to play professionally, let alone win another title at one of the most iconic events in world sports.

“It’s overwhelming because of what has transpired,” Woods said. “It’s unreal for me to be experiencing this. I’m kind of at a loss for words really.”

But he’s still a massive draw, with large galleries following his progress around the manicured fairways and greens of Augusta National Golf Club. He shot a round of 70 to end the tournament at 13-under par, one shot ahead of three players including Dustin Johnson.

Nike released a short video within seconds of Woods holing his winning putt, showing various images of him over the years and with the message, “It’s crazy to think a 43-year-old who has experienced every high and every low, and has just won his 15th major, is chasing the same dream as a 3-year-old.”

Woods, 43, turned pro in 1996 and almost immediately became the sport’s dominant player. He won 14 majors before his 33rd birthday, and had a seismic impact off the course, driving new interest in golf worldwide and huge television ratings in the US He won the Masters in 1997, 2001, 2002 and 2005.

Things fell apart starting in 2009, when news reports detailed extramarital affairs he was having with a number of different women. That began a 10-year stretch marred by a messy divorce, substance abuse and a litany of injuries.

There had been moments of Old Tiger — he regained his No 1 ranking in 2013 — but his play was largely inconsistent. He missed most of 2017 following back surgery, and in May of that year was arrested for driving under the influence.

Along the way, sponsors came and went. A number of companies, such as AT&T, Accenture and Gillette dropped him after the infidelity scandal, and Nike, by far his most important corporate ally, recently announced it was getting out of the golf equipment business entirely. It still makes Woods’s clothing.

No one has dominated the golfing landscape, on or off the course, in the way that Woods did in his heyday. Players from Rory McIlroy and Jordan Spieth to Dustin Johnson and Brooks Koepka are among those vying to be the new wunderkind of the fairway, but there’s been no consistent standout.

His new partners include Bridgestone, which supplies his golf balls, and TaylorMade, which replaced Nike as his equipment sponsor. Woods’s bag, once branded by Buick, now has logos for Monster Energy drink.

Finally healthy, Woods has been playing better of late. Last September he won the Tour Championship, his first PGA Tour title in five years, and came to Augusta as the world’s No 12. He’s set to move into the top 10 when they’re updated next.

The championship will stoke renewed interest in his quest to top Jack Nicklaus’s 18 major titles and will reverberate around the golf world.

Ratings for Saturday’s round on CBS suggested a Tiger spike although Augusta’s decision to move the final day’s play to the morning may neuter that effect slightly. Ratings for the third round were 5% higher than last year. That halo could extend to golf tournaments moving forward, especially the PGA Championship next month at Bethpage’s Black Course in Farmingdale, New York.

It will also have consequences for sports books across the country. William Hill in Nevada took a $85 000 bet on Woods at 14-to-1 that will pay out $1.2 million, the largest liability on a golf bet in the company’s history taking wagers in the US Before the start of the tournament, FanDuel’s chief marketing officer said the company had more than $1 million of exposure on Woods winning it all.

“It’s great to see Tiger back. It’s a painful day for William Hill — our biggest golf loss ever — but a great day for golf,” said Nick Bogdanovich, US director of trading at William Hill.

“Every time someone is head and shoulders above everyone else it tends to bring in not just the hardcore fans, but the casual fans as well,” the sports marketing analyst said, citing Michael Jordan in basketball, Tom Brady in football and Woods in golf.

“He moves the needle like no other golfer does or ever has done,” Dorfman said. “Nobody can do what he does and it’s amazing he’s been able to do it for as long as he has.”