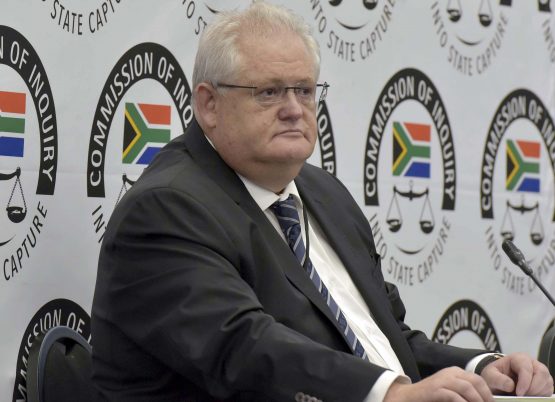 Services company Bosasa paid bribes to two of South Africa’s most senior prosecutors to help it evade graft charges and secure confidential information, according to its former chief operating officer.

Nomgcobo Jiba, the deputy national director of public prosecutions, received a monthly payoff of R100 000 ($7 235), while Lawrence Mrwebi, the special director of public prosecutions, was paid R10 000, Angelo Agrizzi told a judicial commission that’s probing graft during former President Jacob Zuma’s rule. In return, the officials, who were given the code names “Snake” and “Snail,” supplied Bosasa with files, emails and documents pertaining to its case, he said at a hearing in Johannesburg on Thursday.

Investigators have spent years examining allegations that Bosasa, which was renamed African Global Operations in 2017, used illicit methods to secure state contracts, but the case hasn’t come to court. Agrizzi, who worked for the company from 1999 to 2016, has previously testified that bribes were also paid to senior politicians and government officials.

President Cyril Ramaphosa, who succeeded Zuma about year ago and has pledged to clamp down on graft, suspended Jiba and Mrwebi in October. A separate panel led by former Constitutional Court Judge Yvonne Mokgoro is investigating their fitness to hold office. Jiba and Mrwebi have both denied wrongdoing.

And no arrests? The mind boggles and then explodes in attempting to imagine the ACTUAL AMOUNT of public funds that have simply DISAPPEARED in the last 20 years of entrenched ANC rule.

Anyone hazard a guess?

A common thread in the State Capture testimony is how little respect the corrupters have for Jacob Zuma.

The Guptas and the Watsons may be Zuma’s friends, but he is their dog.

Zuma, like a pavement special, drools at the feet of Watson, Gupta and a host of other benefactors for scraps and bones.

The only thing missing from the Bosasa revelations is: where is the projectile vomit from an outraged Luke Watson?