A tourism boom in the Indian Ocean island nation of Seychelles is fueling a world-beating rally in its currency.

The Seychelles rupee strengthened 2.9% this week to 13.31 against the dollar, bringing its gain so far in 2021 to 60% — the best performer of 146 currencies tracked by Bloomberg globally. It’s one of five African currencies in the top 10 this year. 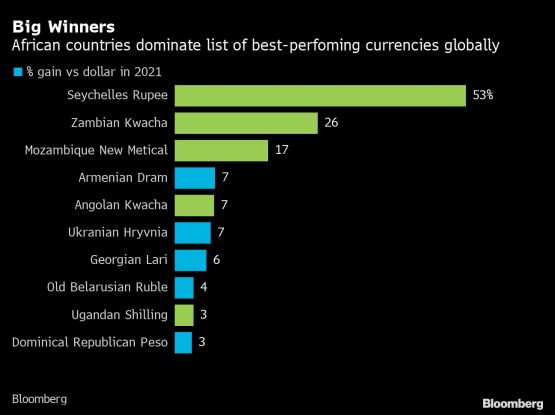 The palm-fringed archipelago this year became one of the world’s most-vaccinated nations after it rushed to inoculate its more than 99 000 inhabitants against Covid-19 to revive its tourism industry, the lifeblood of Seychelles’ economy. Visitor arrivals so far this year are up 8% from 2020, driven by a more than doubling in visitors from Asia, according to National Bureau of Statistics data.

“There has been a large influx of foreigners and people going on vacation since the reopening of the tourism industry earlier this year and this has supported the local currency market to get back on its feet,” said Murega Mungai, a Nairobi-based trading desk manager at AZA Finance.

More than 77% of Seychelles’ population is fully inoculated with either Sinopharm or AstraZeneca Plc shots, including more than half of the nation’s estimated 7,000 adolescents aged between 12-17 years in a campaign that started September 10, according to the Health Ministry.

Seychelles’ government this month revised up its forecast for economic growth this year to 6.7%, from an initial 2.08% forecast. The economy contracted 13.5% last year.

I find the lack of honesty with vaccination timeline and effects in this article suspicious. The author wrongly suggest that tourism is booming because they efficiently vaccinated 70% of their population early, so they’re now safe and covid is under control (implied). This is not true. Here’s an accurate timeline:

From May 13th 2021: “The Seychelles is causing concern for world health experts after a rise of Covid-19 cases among fully vaccinated individuals.” “The health ministry said more than a third of people who tested positive for Covid-19 in the week to May 8 had been fully vaccinated.” By mid April the Seychelles was the most vaccinated country on earth, with 60% of their population being double-jabbed.
https://www.cnbc.com/2021/05/13/seychelles-most-vaccinated-nation-on-earth-but-covid-19-has-surged.html

Yet covid cases and deaths still surged from the end of April until the middle of May, and has since dropped off and stabilised:
https://www.worldometers.info/coronavirus/country/seychelles/

Back in May, the Seychelles was the big conundrum, the big mystery, the big concern: why was covid spiking if they were fully vaccinated (the most vaccinated in the world)? Now this author nonchalantly claims that tourism has boomed this year because seychelles has led the way on handling covid. Lazy reporting. But effective in spreading the agenda and propaganda that SA needs to vaccinate 70% or higher in order to open for tourism. Shameful and destructive.