The US president’s biggest foray into African affairs has not turned out well.
Antony Sguazzin, Bloomberg 11 Jul 2020  00:43 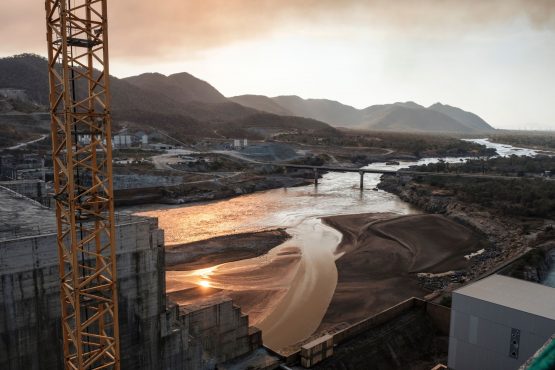 Donald Trump’s biggest foray into African affairs has not turned out well.

The US president’s bid to resolve a long-running dispute over a Nile dam has failed to make a breakthrough, joining his unsuccessful efforts in crises from North Korea to Kosovo.

In the case of the Nile he’s largely fallen afoul of the same intractable regional politics that have bedeviled African leaders for years in their own fruitless attempts to end the disagreement. Even so, it risks adding to the perception the US is struggling to influence other countries. It follows Trump’s past denigration of African nations, while years of neglect of the continent by successive US administrations left the running to China.

“Under Trump, the US has certainly lost its soft power in Africa,” said Mohamed Diatta, a researcher for the Pretoria-based Institute for Security Studies. “People on the continent don’t want to have anything to do with him.”

Trump accepted Egyptian President Abdel-Fattah El-Sisi’s request in September to mediate the conflict with Ethiopia over a dam on the Nile, but his public praise for Sisi — he once called him “my favorite dictator” — signaled to African leaders that the US wasn’t going to be a honest broker. After it ended up with the United Nations Security Council, African nations are moving to wrestle back control of the process.

The dispute is at a critical moment. Ethiopia has said it plans to start filling the Grand Ethiopian Renaissance Dam, the site of Africa’s biggest hydropower plant, within weeks. Egypt says the dam will deprive its citizens of the water they need to farm and survive unless there’s a firm agreement on the pace of its filling.

In a letter to the Security Council on June 29, Egypt vowed to “uphold and protect the vital interests of its people.” “Survival is not a question of choice, but an imperative of nature,” it said.

In a conversation with a small group of delegates at a conference last month, South African President Cyril Ramaphosa disparaged Trump’s involvement.

Over refreshments, he said the US leader would need to visit Africa to sort things out in person but wouldn’t, because it is a “shithole” — a reference to Trump’s 2018 comments about the continent. Ramaphosa also said that instead of allowing the African Union, which he currently chairs, to resolve the deadlock, Sisi “went running to his master,” a reference to America. Ramaphosa’s spokeswoman Khusela Diko said she had no knowledge of the conversation.

Trump’s handing of the issue has raised eyebrows in the US itself. He bypassed the State Department and asked Treasury Secretary Steven Mnuchin to spearhead the talks, simply because Mnuchin was at the meeting when Sisi made the request, people familiar with the situation said. Experts say the intervention has turned what was essentially a technical dispute into a national security issue for three nations that depend on the river — Ethiopia, Sudan and Egypt.

Colin Thomas-Jensen, a senior adviser with WestExec Advisors and former Africa policy adviser to one-time US Ambassador to the United Nations Samantha Power, said the U.S. handling of the dispute had been “clumsy” but added it was unfair to blame the Trump administration for how bogged down the issue has become.

“The crisis over the GERD has been building for nearly a decade, and yet there’s been negligible international effort to construct a mediation process with multilateral support from countries with leverage over the parties, including China and the Gulf states,” he said. “Instead, the Egyptians have been forum shopping with the United States and others while the Ethiopians have dragged their feet.”

Two people familiar with the discussions, who spoke on condition of anonymity, said the US thought it was making headway through early February, when a proposal appeared to have tentative support from all sides. But the people said Ethiopian officials reversed themselves and declined to attend Feb. 28 talks in Washington, bringing the process to a halt.

The administration remains committed to helping reach a deal, the people said, rejecting claims the US has thrown its weight behind Egypt. Each of the parties has griped at various points about the situation, they said.

Both the African Union and Ethiopia have stressed to the UN that the AU needs to take the lead in resolving the dispute, despite years of failing itself to make progress. In the words of Ethiopia, “the Nile and the GERD are African issues that must be given African solutions.”

Ethiopia and Egypt are longtime rivals in a high-stakes battle for control over the Nile, Africa’s longest river. Ethiopia is seeking to break what it sees as centuries of domination by Cairo, codified in so-called colonial-era treaties of 1929 and 1959. As far back the 1970s, Egyptian President Anwar Sadat warned of war should the dam get built.

Egypt fears the dam’s 74 billion cubic-meter reservoir and associated 6,000-megawatt power plant would give control over its water supply to a regional and upstream rival. Over the years it has argued the dam’s design was unsafe, would put the downstream flow of water at significant risk, and had a needlessly large dam and reservoir.

“A threat of potentially existential proportions has emerged that could encroach on the single source of livelihood of over 100 million Egyptians,” Egypt said in its letter to the Security Council. Ethiopia rejects Egypt’s claims.

“Egypt’s intention by taking the dispute to the UN Security Council is to lump international pressure onto Ethiopia and force it to make meaningful concessions,” said Anthony Skinner, director for Middle East and North Africa at U.K.-based risk consultancy Verisk Maplecroft.

Egyptian diplomats say Ethiopia’s claims of US bias are disingenuous and seek to distract from its refusal to cooperate with other Nile nations. They point to strong US backing for the current, reformist government of Prime Minister Abiy Ahmed, who won the Nobel Peace Prize last year for his efforts to end hostilities with neighboring Eritrea. Ethiopia received at least $881 million in financial assistance from the US in 2019, one of the highest levels worldwide.

Still, a year and a half after the US got involved in the dispute, little has changed. It’s far cry from the pomp that greeted Trump’s involvement, with the World Bank joining the first US-mediated talks in early 2019.

Another White House effort to wade into a thorny international dispute faced a setback last month. Kosovo’s leaders pulled out of US-brokered talks with Serbia scheduled for June 27 in Washington, after an international prosecutor in The Hague indicted President Hashim Thaci for war crimes in the former Serb province’s 1998-1999 war for independence.

In the Nile dispute, on June 17 the White House put the onus on Ethiopia, urging the country to strike “a fair deal.”

257 million people in east #Africa are relying on #Ethiopia to show strong leadership, which means striking a fair deal. Technical issues have been resolved – time to get the GERD deal done before filling it with Nile River water!

In response, Ethiopia took advantage of the fact that the AU chairmanship passed from Egypt to South Africa this year and asked Ramaphosa to get involved. The negotiations have now gone back to the AU, where several attempts years earlier to resolve the issue failed.

“If the Security Council starts addressing developmental issues, outside of its mandate, it opens up a Pandora box and will be a stage for noise,” Ahmed told parliament on July 7.

The latest moves have dimmed the chances of a US-brokered solution.

“The US is no longer seen as an honest broker,” said Edward Hobey-Hamsher, a senior Africa analyst at Verisk Maplecroft. “Its role has come to an end.”