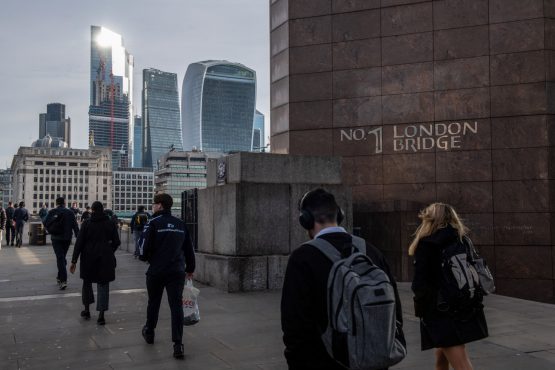 After their strong start to 2022, U.K. large-cap equities might be about to lose steam.

Analyst price targets over the coming year suggest the FTSE 1OO Index has among the lowest return potentials of major global indices, according to data compiled by Bloomberg. The benchmark’s 12-month implied upside of 19% — calculated by aggregating the average price targets of index constituents — compares with 29% for the Euro Stoxx 50 and 21% for the S&P 500.

The FTSE 100 has gained 0.6% this year versus a 12% drop for the Euro Stoxx 50 due to its abundance of buoyant commodities stocks, and high exposure to defensive and value stocks, such as banks. That outperformance has eaten into expected upside, while an easing in commodities prices could weigh on energy and mining stocks.

A Bloomberg survey of strategists published last week suggested just 0.8% upside for the U.K. benchmark by year-end, versus 8.1% for the Euro Stoxx 50. The top-down view of index targets is typically much lower than the price target aggregate, where analysts are evaluating single stocks.

“The undervaluation was at multi-decade extremes and the outperformance has been relatively muted, so far,” said Ian Lance, who manages more than 3 billion pounds ($3.8 billion) as co-head of the U.K. Value & Income team at Redwheel. Still, some sectors, such as consumer staples, look “very expensive,” Lance said by email.

Although rising inflation and interest rates in Britain could hinder consumer demand, the FTSE 100 is somewhat shielded from the domestic economy as the majority of sales come from abroad. Still, the price-target data indicates that U.K. midcaps have stronger scope for gains, with the FTSE 250 index offering 28% upside, the same as the Nasdaq 100 Index.