US stocks retreat on economy and trade jitters 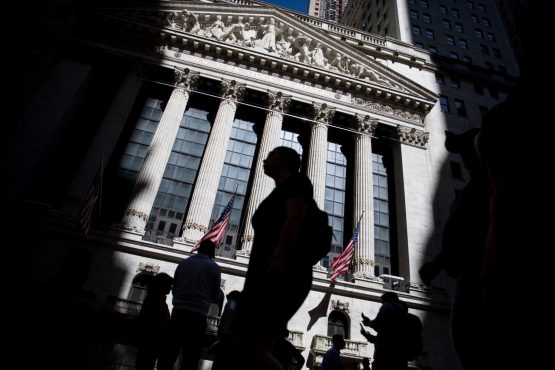 Wall Street stepped back from last week’s record highs on Monday, with weak US manufacturing data and fresh trade worries keeping buyers on the sidelines.

All three major US stock averages began the last month of the year in the red as investors returned from the long holiday weekend.

A report from the Institute for Supply Management (ISM) showed US manufacturing activity contracted in November for the fourth consecutive month, stoking concerns that the longest period of economic expansion in US history could be losing steam.

“The question is will consumers continue to keep the economy afloat,” Pursche added. “And so far, the preliminary data regarding Black Friday spending is very positive. It’s a big number.”

And Cyber Monday sales were expected to hit a record following $11.6 billion in online sales on Thanksgiving and Black Friday.

Earlier, US President Donald Trump tweeted that he would restore tariffs on steel imported from Brazil and Argentina, boosting shares of US steel makers US Steel and AK Steel by 4.2% and 4.7%, respectively.

Still, it was the latest sign that the multi-front trade between the United States and its global trading partners will continue to dominate markets and hinder global economic growth.

The news comes on the heels of recent Wall Street highs, driven to records last week on hopes of an imminent “phase one” trade agreement between the United States and China.

A senior adviser to Trump said on Monday it was still possible that a deal with China could be reached by the end of the year.

“This is not just about Trump announcing steel tariffs, but fears that he’s going to allow increases in tariffs against China on December 15,” added Pursche. “That’s part of the story.

“On the trade front, we need something and it doesn’t have to be much,” Pursche continued. “People have taken the slightest bit of positive news and sunk their teeth into it.”

Of the 11 major sectors in the S&P 500, only consumer staples and energy ended the session in positive territory.

Monday’s slide in US stocks prompted at least one large investor to pay $31 million to buy stock options that would guard against a sharper hit to stocks into the start of next year.

Declining issues outnumbered advancing ones on the NYSE by a 2.66-to-1 ratio; on Nasdaq, a 2.48-to-1 ratio favored decliners.

Volume on US exchanges was 6.84 billion shares, matching the 6.84 billion average over the last 20 trading days.