A measure of value versus growth just slumped to its lowest since 1975. Picture: Shutterstock

The last time value shares stunk this badly, the Vietnam War had just ended, ‘Jaws’ was breaking box office records and the UK was voting to stay in Europe’s common market.

A measure of value versus growth just slumped to its lowest since 1975. That marks more than four decades since shares dubbed inexpensive traded at such depressed levels versus those with the best earnings growth.

A similar story for value versus low-volatility stocks is prompting JPMorgan Chase & Co. to declare a “once-in-a-decade opportunity” to bet on the unloved factor. The yawning gulf represents “the largest relative valuation bubble in modern equity market history,” bank strategists wrote in a recent note. 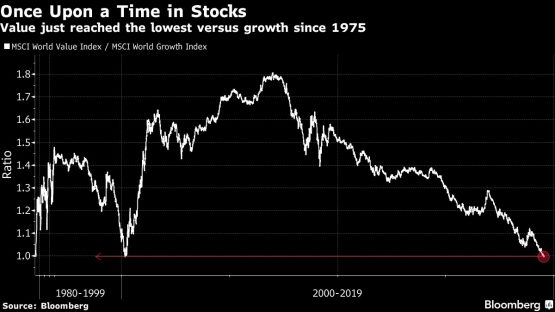 Some generational perspective might indeed be in order for investors who have thrown in the towel. When value stocks plunged to similar levels versus growth at the height of the dot-com bubble in 2000, they went on to surge more than 50% against their opposing cohort in the next 12 months, MSCI indexes show.

“It certainly seems like this period is getting a bit long in the tooth,” Chris Meredith, a fund manager at O’Shaughnessy Asset Management, wrote in a note. Once technological innovations achieve maturity, “value investing has historically outperformed,” he wrote.

Structurally, there’s a growing suspicion the value factor may be broken. Technology is evolving so rapidly that it’s turned traditional sectors like financials and industrials into permanent laggards, the argument goes.

The Federal Reserve’s return to cutting rates and slowing economic growth also bode ill for a factor typically associated with economically sensitive stocks like car makers and banks. Falling long-end bond yields can also flash lower economic growth ahead, favouring long-duration assets like growth stocks that are forecast to deliver higher earnings regardless of the cycle. 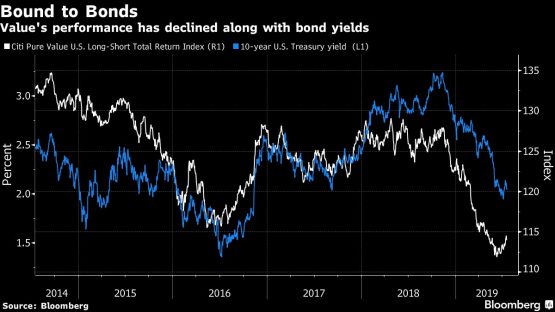 In a Bank of America survey from July, just 2% of fund managers who oversee a total of nearly $500 billion expected value to outperform growth in the next 12 months, the least since 2010.

That hasn’t stopped some from trying to breathe life into the trade. JPMorgan strategist Marko Kolanovic argues that steadier economic data, progress in trade talks and a steepening of the yield curve sparked by Fed rate cuts could pave the way for a value revival. Even something as small as hedge funds boosting exposure could be enough, he says.

Or perhaps we’ve been defining value all wrong? That’s another theory: As intangible assets from patents to human capital become increasingly critical to corporate success, it makes no sense to use book value in multiples, as the common definitions of the factor often do.

Value’s decline has been a particular scourge to quantitative funds. Discretionary investors can be flexible with how they execute their mandate — but quants are by definition systematic, and value is backed by one of the longest histories and some of the most academically rigorous research among factors.

Quants like to remind investors that from 1926 through 2018, various metrics of value beat growth by at least 1 percentage point in annualised returns, O’Shaughnessy Asset Management research shows.

That’s little consolation to fund managers struggling to explain away years of underperformance.

“Value requires patience and so might be hard to ‘arbitrage away,’” Sanford C. Bernstein strategists led by Inigo Fraser Jenkins wrote in a note last month. “Given its long payback time and periodic bouts of 10-year underperformance, people risk losing their jobs if they hold it over the business cycle.”

Quite simply: in a low growth environment, you only get capital appreciation by buying growth stocks.

Pandemic puts millions of Europeans on path to a debt crisis

Pandemic puts millions of Europeans on path to a debt crisis