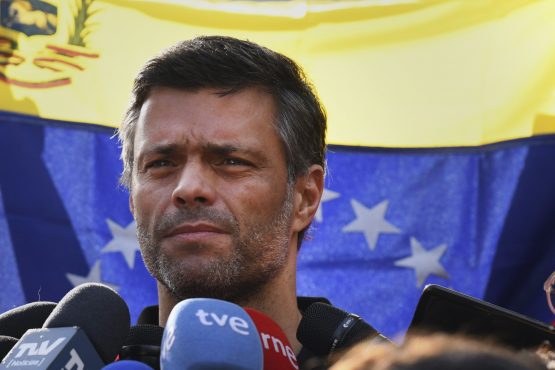 Lopez, a political prisoner since 2014, had been taking refuge in the Spanish embassy since April 2019 following a botched uprising against President Nicolas Maduro that he led alongside National Assembly head Juan Guaido.

Lopez was reunited on Sunday with his family, the Spanish Foreign Ministry said. His wife and children have lived in Madrid since last year.

Opposition leader Leopoldo Lopez speaks to members of the media outside of the Spanish ambassador’s residence in Caracas, Venezuela, on Thursday, May 2, 2019. Following the failed uprising earlier this week, Lopez’s first public appearance since his arrest five years ago might have helped doom a deal two months in the making.

Lopez’s decision to leave the embassy was “personal and voluntary,” according to the statement. The ministry also condemned what it said was the detention of some of its embassy workers in relation to Lopez’s exit, without providing additional details.

Lopez’s departure will be a blow to an already weakened opposition, which under Guaido’s stewardship has failed to deliver the quick transition to power promised at the start of 2019.

“After two years of a continuous struggle, it seems that Maduro is stable and the opposition cannot find answers,” said Caracas-based political analyst Dimitris Pantoulas. “Lopez considers that it’s better to continue his fight outside, from exile, something that could also happen with Guaido.”

Venezuela said it was investigating what it called a “flagrant violation” of the Vienna Convention on Diplomatic Relations by the Spanish Ambassador Jesus Silva’s role in organising Lopez’s escape.

“Spain participates actively in the illegal escape of a dangerous delinquent and decides to receive him in its territory” without regard to laws, the government said in a statement published by Foreign Minister Jorge Arreaza on his Twitter account.

While the U.S. and many other countries now consider Guaido to be the country’s legitimate president, an influential Trump administration official secretly met with a representative of Venezuela’s regime in Mexico City in September to try to negotiate Maduro’s departure from power.

Sentenced to almost 14 years in prison on charges including arson and instigating violence after spearheading anti-government protests, Lopez was released on house arrest in 2017 with orders to remain quiet. From there, he helped orchestrate the rise of Guaido, who he met more than a decade ago during protests against the late Venezuelan President Hugo Chavez.