As investors brace for the Federal Reserve’s policy decision later on Wednesday, one corner of the foreign-exchange market looks particularly nervous.

Overnight volatility for South Africa’s rand rose to as much as 25%, the most since August 2018, before paring the steep climb to trade at levels last seen in early May. The rand, which is often traded as a proxy for emerging-market assets, is highly sensitive to moves in Fed policy and the dollar. 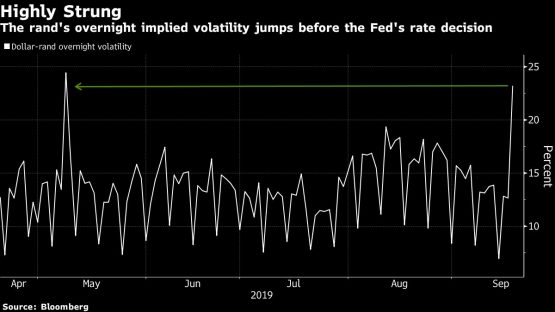 The Federal Reserve Open Market Committee is widely expected to cut its benchmark rate by a quarter percentage point, the second reduction this year. It may also take steps to inject cash into the economy, which would benefit risk currencies as the increased liquidity would weaken the greenback, making it cheaper for investors to borrow dollars to buy higher-yielding emerging-market assets. If the US central bank falls short of traders’ expectations, however, the rand could be pummeled.

“If central banks in the advanced markets add sufficient liquidity, which is currently not as evident quite yet as the market is pricing in, the carry trade could return in a big way,” said Neels Heyneke, a Johannesburg based strategist at Nedbank Ltd. in a note to clients.

The rand’s one-week implied volatility versus the dollar is the highest among 24 emerging-market peers, followed by the real and the lira. The South African currency strengthened for the first day in three on Wednesday, gaining 0.5% to 14.64 per US dollar by 12:27 pm in Johannesburg.