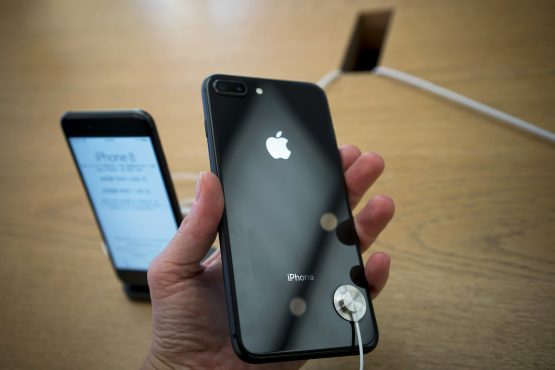 The launch of iPhone 8 kicked off in a less lively mood in Asia versus previous debuts. Picture: Bloomberg

US stocks were little changed on Friday as fresh concerns over tensions between North Korea and the United States weighed on the mood of investors.

North Korea said it might test a hydrogen bomb over the Pacific Ocean in response to US President Donald Trump’s threat to destroy the reclusive country in his United Nations address.

“While we don’t expect a serious selloff, the geopolitical rhetoric could heat up.”

The latest spike in tensions prompted demand for gold, which rebounded from a four-week low on Friday.

Wall Street slipped on Thursday as investors braced for a third interest rate hike this year and shares of Apple fell on worries about demand for its latest smartphone.

Investors increased bets the Federal Reserve would raise rates again this year after its economic projections showed 11 of 16 officials see room for a 0.25 percentage points increase in the federal funds rate from the current level.

Market will look for more insights into Fed’s policy from speeches by Dallas Fed president Robert Kaplan and his Kansas City counterpart Esther George later in the day.

Oil prices were steady as investors waited to see whether major producers meeting in Vienna would back an extension to output cuts beyond March next year.

Six of the 11 major S&P sectors were higher, led by 0.56% rise in the telecom services index. The financial index fell 0.44%, its first session of loss in six days.

Apple fell more than 1%, dragging the three major indexes lower, as the launch of iPhone 8 kicked off in a less lively mood in Asia versus previous debuts.

T-Mobile rose 1.45% after Reuters exclusively reported the company was close to agreeing tentative terms on a deal to merge with Sprint. Sprint shares jumped 4.92%.

Versartis slumped more than 85% after its experimental drug for treatment of growth hormone deficiency in children failed in a late-stage study.