The Hawks say the arrest is a culmination of many years of investigations.
Tiisetso Motsoeneng, Reuters 6 Feb 2019  14:25 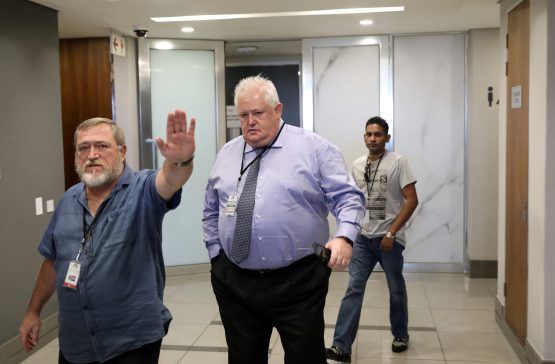 Angelo Agrizzi and four others are being charged with misappropriating about R1.6bn. Picture: Siphiwe Sibeko, Reuters

South African police arrested five people, including a witness at a judicial inquiry into alleged influence peddling, on charges of corruption and fraud in the awarding of government contracts, a police spokesman said on Wednesday.

One of those arrested was Angelo Agrizzi, a former executive of a private company who testified for more than a week on how he bribed politicians and bureaucrats to secure government contracts for his company.

The five are charged with misappropriating about R1.6 billion ($44.5 million).

“These arrests are a culmination of many years of investigations,” said Hangwani Mulaudzi, the spokesman for the Hawks police unit.

The five appeared in a Pretoria court and were each granted R20 000 bail. The case has been postponed to March 27.

Warrants were issued for the arrest of two others. One is overseas and the other is in the coastal city of Port Elizabeth, Mulaudzi said.

The arrests are linked to contracts awarded by the correctional services department to services company Bosasa Operations, now know as African Global Operations.

The inquiry where Agrizzi testified are public hearings on claims that corporate interests that include the Gupta brothers — the heads one of the country’s biggest conglomerates — unduly influenced former President Jacob Zuma over political appointments and winning contracts.

Zuma and the Guptas deny wrongdoing.

“The five are charged with misappropriating about R1.6 billion ($44.5 million)”

My currency app on my Mac agrees. And this on “Moneyweb”???

And ….. “These arrests are a culmination of many years of investigations,” said Hangwani Mulaudzi, the spokesman for the Hawks police unit.

Dear God Mr Spokesman, so suddenly things came to a head and all your hard work over many years has now resulted in these arrests, but only after Mr Agrizzi laid it all out in a commission?

What low-ranking amateurs these Hawks are! For many years they struggle to build a case. Now, after the guy testified before a judge about the crimes he was involved in, they arrest him! What we should make of this is that the Hawks are utterly incompetent and unable to prosecute anybody who did not plead guilty before a judge first.

They should just arrest themselves for wasting taxpayer money.

So was Agrezzi arrested for corruption or racist statements?

uhr uhr and what about Montashe and other politicians who received prezents ?
Azania looking more like Putin and his oligarchs every day

Yah – This will do wonders for Investor confidence. Arrest the Private sector guys who are as corrupt as any ANC Cadre on any given day but where are the arrests of the ANC members who TOOK the bribes? Is corruption in SA only done by one party??