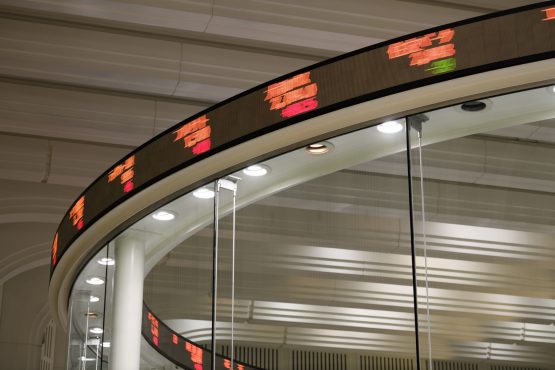 The world’s hottest stock market is in the coldest of its capitals.

In a year when a seemingly unstoppable rally has pushed equities from the U.S. to Europe into successive record highs, Mongolia’s minuscule bourse has emerged as the undisputed champion.

The MSE Top 20 Index, which tracks the biggest companies in the planet’s most sparsely populated country, has gained almost 130% in 2021, by far the best performance among the primary equity indexes tracked by Bloomberg. While a losing streak this week has some traders asking if the party is coming to an end, optimists see room for further gains.

“The Mongolian equities market has a blue sky potential, because it is growing from a very small base,” said Bilguun Ankhbayar, vice president of business development at Erdene Resource Development Corp., a Canadian company that’s exploring for gold and copper in the nation. 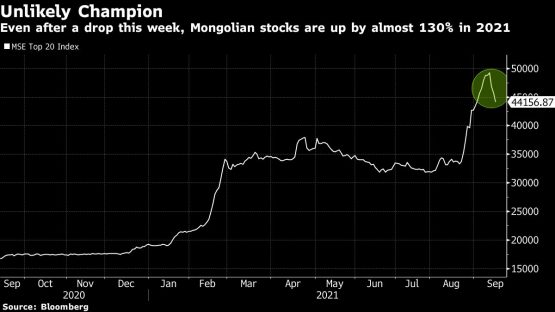 The gains are reminiscent of the outsized returns seen from meme stocks and cryptocurrencies during the investment craze of the pandemic. Optimists could argue that the foundations of the Mongolian rally may be solid.

The economy posted a 6.3% growth rate in the first half of the year, amid an export surge of commodities including coal and copper, the bulk of which is shipped to China. The giant neighbor’s insatiable hunger for raw materials has been the main driver of the rebound in the resource-rich Mongolian economy.

Thomas Hugger, chief executive officer at Asia Frontier Capital Ltd., says Hong-Kong listed Mongolian Mining Corp. is the best-performing Mongolian stock in his fund. The shares are up 225% this year.

Still, this is not a miners-only party.

Take Apu Company Ltd., which produces vodka, beer and other beverages, and is up almost 130% this year. Returns of such magnitude may be a sign of confidence that consumption will continue to thrive among Mongolia’s growing middle class, or a warning of a bubble. The company is the biggest listed on the Mongolian Stock Exchange, with a market value of $517 million.

Ulsiin Ikh Delguur JSC, which operates a 100-year-old Soviet-era shopping mall in the capital Ulaanbaatar, was up by 613% this year as of last week, when MSE Top 20 reached a record high. It has shed some of these gains in the losing streak this week, though it’s still up an eye-watering 315% year to date.

As the global economy grapples with an unstable and uneven recovery, and with strategists in major investment banks warning about stretched valuations in equity markets worldwide, a repeat of past hard landings can’t be excluded.

“We expect the index to move sideways or trend down slightly,” said Hugger, who has 19% of his AFC Asia Frontier Fund invested in Mongolia, the portfolio’s biggest country weighting. “However, we think that undervalued stocks which have not yet participated in the rally will gain ground over the next couple of months.”

Angarag Byambajav, a broker at Mongolia International Capital Corp., says the market rally is likely fueled by a surplus of cash by locals, following government stimulus to cushion the blow from the pandemic, and thus may not last.

“The market is bound to correct itself. In fact we think it’s already under way,” she said.

Mongolia is super rich in resources, each Mongolian citizen could be a multi millionaire in Dollars.