A December rate hike would be a “live possibility,” but “let’s see what the data shows,” Yellen said on Wednesday.
By Craig Torres, Christopher Condon and Jeanna Smialek, Bloomberg 5 Nov 2015  00:39 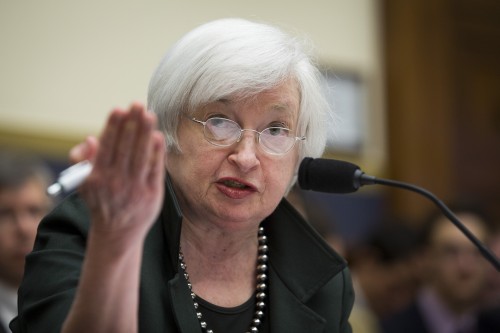 “At this point, I see the US economy as performing well,” Yellen said on Wednesday in testimony before the House Financial Services Committee in Washington. If economic data continue to point to growth and firmer prices, a December rate hike would be a “live possibility,” she said. Speaking in New York hours later, Dudley said he agreed with the chair, but “let’s see what the data shows.”

The Federal Open Market Committee said in its October statement that it will consider raising interest rates at its “next meeting,” citing “solid” rates of household spending and business investment. Yellen’s and Dudley’s comments reinforced the idea that next month is in the crosshairs for an increase, and placed the focus on upcoming employment and other economic data.

“There are pretty good odds that the Fed will hike rates in December as long as employment perks back up and the unemployment rate slips further, which is what we are looking for,” said Mark Vitner, a senior economist at Wells Fargo Securities LLC in Charlotte, North Carolina. “She is trying to keep the Fed’s options open in December.”

No decision has yet been made on the timing of a rate increase, Yellen cautioned.

Yellen appeared before the committee to testify primarily on the Fed’s supervision and regulation of financial institutions.

“What the committee has been expecting is that the economy will continue to grow at a pace that’s sufficient to generate further improvements to the labor market and to return inflation to our 2% target over the medium term,” she said.

US central bankers have held the policy rate near zero since 2008 as they have waited for labor markets to move closer to their goal of full employment.

The unemployment rate stood at 5.1% in September, slightly above the 4.9% rate that officials estimate would satisfy their mandate. The Bureau of Labor Statistics will release the October jobs data Friday.

“I see under-utilisation of labor resources as having diminished significantly since earlier in the year, although recently we’ve seen some slowdown in the pace of job gains,” Yellen said.

The Fed has missed its 2% inflation target for more than three years, and its Oct. 28 statement said they need to be “reasonably confident” that prices will rise toward their goal before raising rates.

“If we were to move, say in December, it would be based on an expectation, which I believe is justified, that — with an improving labor market and transitory factors fading — that inflation will move up to 2%,” Yellen said.

Michael Gapen, chief US economist at Barclays Capital Inc. in New York, said Yellen’s comments on inflation served to deflect an argument outlined in October by Fed Governor Lael Brainard that the central bank should wait to see movements in inflation before raising rates.

Yellen rejected that argument in favour of a “forecast-based decision,” Gapen said.

“The divide in the committee was essentially over whether they should move in advance of inflationary pressure or wait to see it,” he said. “This clearly says the forecast-based side won that argument.”

Answering questions from reporters, Dudley said the decline in inflation expectations recorded in the New York Fed’s consumer survey is a little concerning, and is corroborated by a University of Michigan survey which shows a similar trend. While he described expectations as still well-anchored, he acknowledged that they were near the bottom of recent ranges, and a further decline would raise the level of concern.

“The economy has to show further improvement for Yellen to actually steer the committee to December liftoff,” he said. “They have put the market on notice, but now the economic data has to cooperate or they may very well delay the 2015 liftoff into early next year.”

Economic growth slowed to a 1.5% annualized pace in the third quarter, according to the government’s advance estimate on gross domestic product. However, low gasoline prices and employment, and income gains are projected to sustain spending.

The pace of growth will quicken to a 2.7% rate in the final three months of the year, according to economists surveyed by Bloomberg.

Fed officials’ last meeting of the year will be held Dec. 15-16, and it includes a press conference withYellen and a new set of forecasts from policy makers.

In response to a question from Minnesota Republican Tom Emmer, Yellen said she wouldn’t rule out using negative interest rates to help stimulate the economy in the event that another serious downturn occurs before the central bank can lift rates away from zero.

Don’t worry we’ll have another market selloff in the 2 weeks prior to the meeting and Janet will again be forced to leave rates unchanged!