Zambia became the first African country to ask bondholders for relief since the onset of the coronavirus as nations from Angola to Kenya battle to cope with the economic hit from the pandemic.

The southern African nation said it needed “breathing space” to plan a debt restructuring, and asked holders of its three Eurobonds totaling $3 billion to defer interest payments until April while it plans a restructuring of its debt. Zambia’s $1 billion of notes due 2024 fell 4.5% in London to 52.46 cents on the dollar on Tuesday, after the government said a coupon payment due October 14 would be included in the proposed suspension.

Other countries have recently also rung alarm bells. Angola, which has negotiated debt relief with some of its lenders, told the International Monetary Fund it may have to approach a wider group of creditors if oil prices continue to decline. Kenya said it’s at high risk of external-debt distress as foreign-currency obligations grow faster than revenue from abroad. And Chad asked Glencore Plc and other private creditors to delay payments on its loans until next year.

“Zambia is currently faced with unprecedented liquidity constraints that have been exacerbated by the Covid-19 pandemic,” the government said in an emailed statement Tuesday. “A combination of declining revenues and increased unbudgeted costs caused by the Covid-19 pandemic have resulted in a material impact on the government’s available resources to make timely payments on its indebtedness, leading to increasing debt servicing difficulties.” 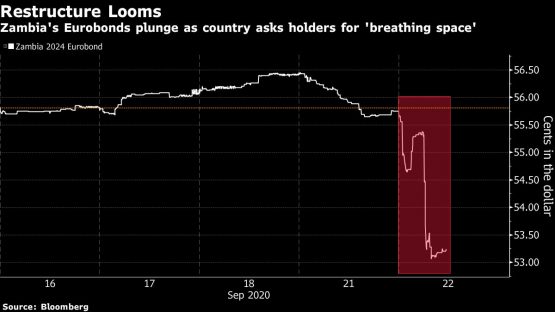 The pandemic has worsened Zambia’s finances, which were already strained after years of overspending, funded in part by external borrowing. The currency of Africa’s second-biggest copper producer is the world’s worst performer this year, making payments on its $11.7 billion in external debt even more costly after foreign reserves slid to record lows. The government said it hopes its restructuring plans will win support from the International Monetary Fund.

Zambia had last month secured a debt-suspension deal up to the end of the year from some official creditors. As part of this accord, Zambia was also obliged to seek comparable terms with commercial lenders, according to Mukuli Chikuba, permanent secretary at the finance ministry. Asking for a suspension of interest payments doesn’t amount to default, he said, adding that the government met a coupon payment earlier this month.

“What we are getting into is not a default per se, but consensus-building,” Chikuba said by phone. The government, which hired Lazard Freres earlier this year for advice on its debt strategy, will outline a set of proposals to bondholders on September 29, he said.

Under Zambia’s interest-holiday request, it will pay bondholders $0.50 per $1,000 in bond principal they hold if the coupon-payment suspensions are approved. Most investors will probably accept the proposal, according to Mark Bohlund, senior credit research analyst at REDD Intelligence in London.

“We think that a majority of bondholders will agree to the standstill,” he said in response to emailed questions. The lack of the collective action clauses in Zambia’s 2024 and 2025 bonds “makes it more likely that you are going to see holdouts in the later restructuring process,” he said.

Zambia’s August elections could be a roadblock to a fast restructuring, given the uncertainty surrounding the result, Anthony Simond, investment manager at Aberdeen Standard investments in London said in response to emailed questions last month. Rafael Molina, managing partner at Newstate Partners LLP, which is advising a group of Zambia’s bondholders, declined to comment.

Zambian Finance Minister Bwalya Ng’andu is due to present the 2021 budget on Friday, which could offer insights into the government’s restructuring strategy and chances of winning an IMF bailout.

The Zambian economy was on the skids long before Covid and it will continue to skid as Lungu sells his country to China. A lot of garbage is going to be swept under the carpet because of “Covid”.

Selling to China will bring short term prosperity and I would like to be a beneficiary. Zambia will not be the exception as many countries are selling themselves to China. On the flip side, you must commend China (who is active – globally- in efforts to grow their economy beyond own borders) who is competing with USA for world dominance. My theme for today……..China is going to save the world from self destruction.
They are found in all corners of the world, providing hope for many people whose countries have failed it’s people. In saying that, there
are happenings in China that I do not agree with, but I am happy to look
the other way.

Tell that to the Uyghurs; and if you do not know what or who the Uyghurs are, look up on the latest news and you get the picture what China has morphed into and their plans for other nations

Dystopia is what China is

Ethnic cleansing happens globally.
In SA for example, muslims, men and women, have to do a form of ethnic cleansing – you know what I mean – before they are accepted to the faith. This practice is not outlawed in SA or any muslim country on the planet.

Btw, China has population of 1.4 billion. I am not going to jump up and down about 1m displaced people who in my opinion, should return to their
countries of origin.