Copper miners in Zambia have halted $2 billion of planned investments because a royalty tax introduced last year makes the projects unviable, according to an industry lobby group.

A plan by First Quantum Minerals to invest $1 billion extending the life of its Kansanshi operation won’t proceed until the royalty is deductible from other corporate taxes, said Sokwani Chilembo, chief executive officer of the Zambia Chamber of Mines. The same goes for EMR Capital-backed Lubambe Copper Mine’s project to invest a similar amount in a new mining operation, he said.

“We need this royalty payment regime removed for progress to begin,” Chilembo said in an interview. “If the government thinking is otherwise, good luck.”

John Gladston, a spokesman for Vancouver-based First Quantum, declined to comment. Lubambe is “actively engaged” in discussions with the Zambian government about its planned extension project in the country, CEO Nick Bowen said in an emailed response to questions.

“The extension project can deliver enormous benefits for Zambia and its people,” he said. “The concessions needed are not material compared to the benefits to Zambia.”

Zambia’s uneasy relationship with mining investors has deteriorated over the past 12 months, with the government clashing with Glencore over the Switzerland-based company’s plan to mothball Mopani Copper Mines’ operations. Zambia’s increasingly aggressive stance over the nation’s key export industry may partly reflect manoeuvring by President Edgar Lungu as he struggles with economic challenges ahead of next year’s elections. 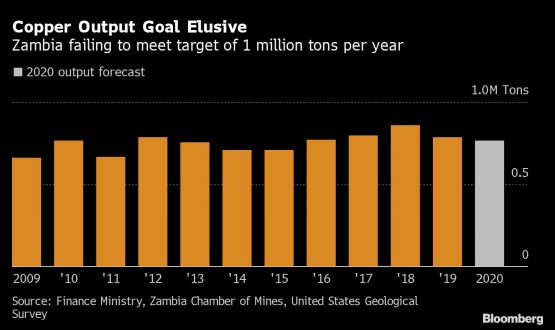 Zambia doesn’t get enough from its mineral resources, but would be willing to consider mining company grievances over the royalty, Finance Minister Bwalya Ng’andu told state television on Sunday. Mining investors are pushing for tax cuts after Zambia approached external creditors for as much as $1 billion in debt-servicing relief as the government seeks to restructure its foreign loans.

“It’s hard to picture large new investments getting the green light under such a changeable tax framework as we have seen recently; mining investors are in for the long haul and need stability,” said William Tankard, principal copper analyst at Wood Mackenzie Ltd.

Zambia, Africa’s No. 2 copper producer, depends on the metal for about 70% of its export revenues. The chamber expects the coronavirus pandemic to cut output this year to about 764,188 tons, far short of Zambia’s target of 1 million tons.

“This pushes up the effective tax rate and makes these projects unattractive given the cost of capital,” he said. “As soon as the double taxation element is removed, these projects become viable.”

The chamber wants the royalties to be deductible from profit tax.