African central bankers meeting in the next two weeks amid a resurgent coronavirus may find they’ve used up most of their interest-rate ammunition to lift their economies out of recessions that still affect much of the continent.

Monetary policy committees have limited scope to provide stimulus after aggressive easing when lockdowns first shuttered output in 2020, with inflation quickening in Nigeria and Angola and restrictions that would dull the impact of rate cuts continuing in South Africa and Kenya.

“I don’t think there is scope for strategic easing of monetary policy in 2021,” said Jibran Qureishi, head of Africa research at Standard Bank Group Ltd. “In the event that economic activity remains sluggish, a bias to cut will persist, but any cuts from these levels will be token.” Here’s what central bankers in the region may do: The South African government’s decision to only reimpose some coronavirus restrictions amid a second wave of cases instead of introducing another hard lockdown could see the central bank stand pat.

All but one of the 17 economists in a Bloomberg survey expect policymakers to hold the key rate at a record low. Traders have pared their expectations of a rate cut with forward agreements, used to speculate borrowing costs, now pricing in a less than 50% chance of 25 basis-point reduction this week.

While inflation is predicted to remain below the 4.5% midpoint of the central bank’s target range through 2022, the balance of risks to the outlook is changing with an increase in oil and crop prices since the November meeting, said Miyelani Maluleke, an economist at Absa Group Ltd. The weakening of the rand in January could also weigh on decision-making, he said. The five-member panel was split in their votes at the last four gatherings.

“A second wave of Covid-19 infections is sweeping through the continent, threatening the nascent recovery that is taking place. Policymakers may wish to extend additional support to their economies, however, rising inflation pressures have limited the space to maneuver. We therefore expect them to continue to keep rates on hold in the coming weeks in a fine balancing act between economy and inflation.” 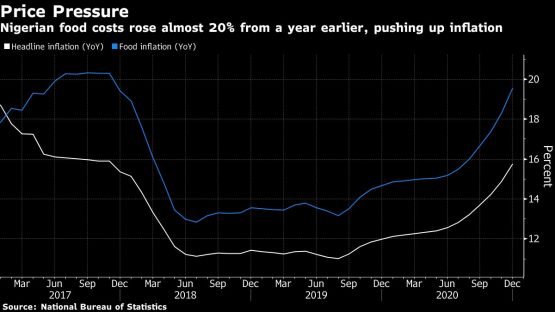 Nigeria’s central bank will likely keep its benchmark rate unchanged as policymakers give previous cuts more time to filter through the economy.

The MPC paused in November after 200 basis points of easing earlier in the year, with Governor Godwin Emefiele predicting the economy would pull out of recession in the first quarter. Now, with inflation at a three-year high, it’s expected to look at other measures to stoke growth.

“Methods and ways to incentivize banks to direct flow of funds to the real sector of the economy will probably be topical at the meeting,” said Gbolahan Taiwo, an economist with Stanbic IBTC Bank in Lagos. 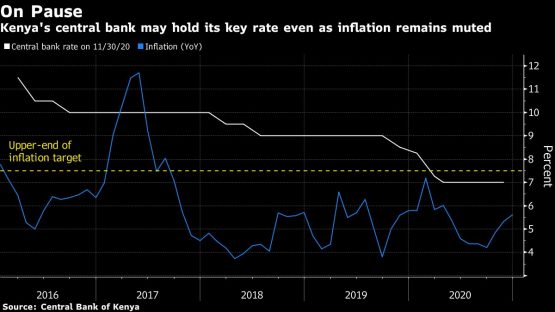 Kenya’s central bank will probably keep its key rate unchanged for a sixth straight meeting even as price growth remains inside its target range of 2.5% to 7.5%.

East Africa’s largest economy may have fallen into its first recession in at least two decades in the third quarter of 2020. While a more accommodative monetary policy stance could stimulate output, the impact of further easing will be muted due to the economic damage caused by the virus, said David Ngugi, an investment analyst at Nairobi-based Cytonn Investments. Banks may also be hesitant to feed rate cuts through to clients amid rising non-performing loans and deteriorating asset quality.

Kenya’s macroeconomic fundamentals remain largely unchanged since the MPC last met in November and that could add to a reluctance to cut, Ngugi said. Mozambique’s central bank will probably hold its benchmark rate, known by its Portuguese acronym Mimo, at a record low as it tries to shore up an economy that slumped into a recession in the third quarter. An Islamist insurgency in the north of the country, where companies including Total SE are working on natural gas projects, poses risks to output that is forecast to return to modest growth in 2021.

While inflation accelerated for a fourth straight month in December, the central bank expects it to remain in single digits this year, allowing for an accommodative stance.

“I do not believe there will be an increase, given the strangulation it can cause in the economy,” said Eduardo Sengo, an economist and director at the country’s Confederation of Business Associations. Angola’s central bank hasn’t cut its policy rate in response to the virus and is unlikely to do so due to rampant inflation.

“They can’t do much because they have the International Monetary Fund telling them that they need to control inflation,” said Carlos Rosado de Carvalho, an economist at the Catholic University of Angola.

The Washington-based lender last year increased the size of the loan to Africa’s second-largest oil producer by almost a quarter to $4.5 billion to help it weather the fallout of the pandemic. Budget documents show the government sees inflation slowing to 18.7% by the end of this year, even as the kwanza continues to weaken and the gradual implementation of a new 14% value-added tax pushes up prices. Ghana’s MPC is likely to keep its key rate unchanged even as inflation moved further above the 10% ceiling of the central bank’s target range in December.

“Ghana has very little fiscal space and may need to use interest rates as a tool to attract capital to fund the deficit,” said Courage Martey, an economist at Accra’s Databank Group.

Although the economy fell into a recession in the third quarter, activity is expected to pick up without monetary policy easing after the government relaxed virus-related restrictions, including reopening schools, he said.

Mauritius, date to be confirmed Mauritius’s MPC will probably leave the benchmark rate at a record low for a third consecutive meeting.

After 150 basis points of easing in response to the pandemic, “there is no urgency for a further cut,” said Takesh Luckho, an economist and independent researcher. With the Indian Ocean island’s Treasury trying to boost output through infrastructure projects, the central bank could lower the key rate in a bid to promote local investment when the economy picks up, he said.

The MPC’s last rate-setting meeting was in September and the planned November gathering was postponed, with no rescheduled date set yet.