Since monetary policy committees in some of the region’s key nations last met, temporary restrictions on movement were imposed in western Kenya in a bid to avoid a catastrophic fourth wave of infections. In South Africa, the reintroduction of strict lockdown measures and deadly riots have emerged as key risks to economic growth. Although policy makers are expected to look beyond rising prices and only raise interest rates after the virus eases, they’ll be cautious of falling too far behind frontier markets such as Ukraine that have already started tightening, said Ayomide Mejabi, chief economist for sub-Saharan Africa at JPMorgan Chase Bank NA. Relatively lower rates may make country’s financial assets less attractive to offshore investors.

Still, multilateral support from the Group of 20 nations that have extended debt-relief measures for some of the world’s poorest countries to year-end, and the allocation of new reserves by the International Monetary Fund should ease fiscal pressures and provide countries with some breathing space to keep rates on hold, Mejabi said.

“We expect Africa’s major central banks — South Africa, Nigeria, Kenya and Ghana — to stay on hold in the coming weeks on growth concerns as the continent continues to grapple with a third wave of infections amid a slow vaccine rollout.”

Here’s what regional central bankers may do:

Mozambique’s central bank will probably leave its benchmark interest rate unchanged for a third straight meeting even as annual inflation edged up in June.

Consumer-price growth will probably remain within the range of 4% to 6% this year because of subdued demand for goods and services, said Neville Mandimika and Daniel Kavishe, analysts at FirstRand Group Ltd.’s Rand Merchant Bank. That implies flat interest rates for the rest of 2021, they said in a note. 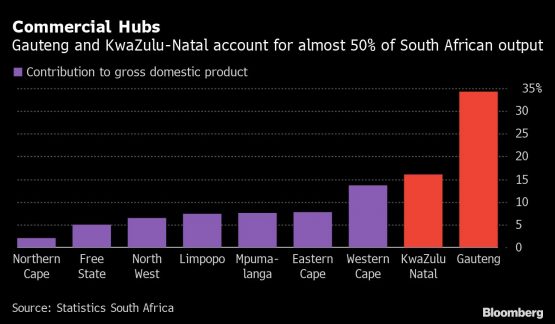 The South African Reserve Bank is expected to leave its key rate at a record low for a sixth straight meeting as the strictest lockdown measures since May 2020 and deadly riots that disrupted activity in two key provinces dim economic recovery prospects.

The central bank’s quarterly projection model, which the MPC uses as a guide, in May indicated one rate increase of 25 basis points in the second quarter and another in the fourth. It deviated from the model by leaving the benchmark unchanged at its last meeting and may now soften its stance about tightening. All 15 analysts in a Bloomberg survey expect the MPC to hold the rate this week.

“The scale of uncertainty in South Africa right now because of the lockdown and unrest makes us even more sure that this is not going to be a very hawkish meeting,” said Gina Schoeman, an economist at Citibank South Africa. It’s likely the MPC won’t give as clear an indication as to when it’ll start to normalise interest rates as it awaits data to assess the impact of the disruptions, she said. Ghana’s central bank is expected to pause after unexpectedly cutting its key rate to a nine-year low to support the recovery of an economy that expanded at the slowest pace in 37 years in 2020.

“There is no reason to move the policy rate in either direction,” said Courage Martey, an economist at the Accra-based Databank Group. “A rate hike will create the impression that there was a policy mistake. A further rate cut will also not allow enough time for the earlier decision to take effect and influence credit and growth.”

The impact of oil prices that have risen since the rate cut and cost pressures including a 13% increase in transport fares from last month are yet to fully reflect in inflation data. Nigeria’s MPC is expected to hold its key rate for a fifth meeting as it seeks to support the recovery of Africa’s biggest economy.

While price data suggests inflation that is almost double the ceiling of the central bank’s official target may have already peaked, policy makers have made it clear that they’ll only switch to taming consumer prices after seeing solid growth momentum.

“Upside risks to inflation in the near term are limited, and this makes standing pat on policy parameters an easy decision to make at the July meeting,” said Mosope Arubayi, an economist at IC Asset Managers. “Their stance could change, however, in the last or penultimate meeting of the year if trends in the global economy continue to foster economic wins for Nigeria.” Kenya’s MPC is likely to keep its key rate unchanged for a ninth straight meeting even as higher fuel prices threaten to stoke inflation.

A better bet would be to stabilize the local currency and for the government to speed up the rollout of Covid-19 vaccines, he said. After postponing its MPC meeting that was scheduled for May, Mauritian policy makers must now weigh leaving the key rate at a record low to support an economy that contracted the most in four decades in 2020 against taming inflation that’s at a three-year high.

While the MPC will probably hold the benchmark next month, indicators show that the island nation has “reached the end of an accommodative cycle,” said Bhavish Jugurnath, an economist and lecturer at the University of Mauritius. “We could see a tightening of monetary policy as inflation is accelerating due to higher import prices and a weakening rupee.”