After two decades of rot, Zimbabwe is coming apart at the seams 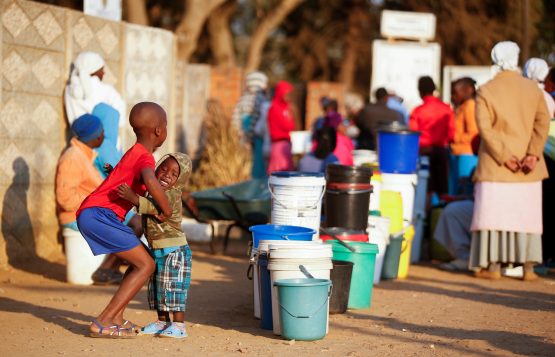 In Zimbabwe, pregnant women are left alone in hospitals to give birth, taps have run dry in major urban centres, infrastructure has all but collapsed and more than half the population needs food aid.

This is the toll that two decades of economic mismanagement have taken on a nation once considered one of Africa’s shining stars. Promises of an economic revival and more political freedom made by President Emmerson Mnangagwa, now in his third year of rule, have rung hollow and public anger over intolerable living conditions has spurred protest action that’s been brutally quashed by the military.

Western governments that berated long-time ruler Robert Mugabe for violating civil rights are levelling similar criticism against his successor. And even South Africa, a regional power broker and long-time Zimbabwe ally, has now entered the fray, dispatching envoys and ruling party officials to Harare, Zimbabwe’s capital, to try and help its neighbour resolve the deepening crisis. No headway was made in initial talks and more are planned in coming days.

“I don’t know how low we can get, but we are in a very low space,” said Alex Magaisa, a Zimbabwean law lecturer who helped design the nation’s 2013 constitution.

It wasn’t always like this. In 1980, respected Tanzanian President Julius Nyerere told Mugabe, a young guerrilla leader who had just taken over as prime minister of newly independent Zimbabwe, that he had “inherited a jewel, keep it that way.”

Mugabe spent his first decade in office augmenting the advanced infrastructure and institutions that the whites-only government had built on the back of cheap black labor, and invested heavily in education and health. Zimbabwe rapidly became one of Africa’s most literate nations and boasted some of the continent’s best hospitals.

A crippling International Monetary Fund Program in the 1990s, rampant corruption, stolen elections and the seizure of White-owned farms laid waste to those achievements. Today many city roads are untarred, power outages last 18 hours a day and a quarter of the population, unable to make a living, has left. Bulawayo, the second-largest city, hasn’t had piped water since last month.

While a popular revolt is unlikely, with a recent call for a national strike largely ignored as the military deployed onto the streets of major cities, the security forces that put Mnangagwa in power are growing frustrated. In June, military leaders took the unusual step of calling a press conference to deny they were planning a coup.

The president subsequently accused his deputy, former head of the armed forces Constantino Chiwenga, of seeking to undermine him, according to people familiar with the situation.

In 1990, Zimbabwe “was flying high and it was among the most industrialised African countries,” said Ringisai Chikohomero, an analyst at the Pretoria-based Institute for Security Studies. “Now Zimbabwe is lagging behind everyone.”

Zimbabwe’s collapse is epitomized by the woeful state of its health system. Hospitals are beset by medicine shortages and recurrent strikes by nurses and doctors over pay and working conditions. The neglect of pregnant women is the latest health scandal to hit the headlines.

“It’s a new low,” said Norman Matara, a doctor who has worked at Parirenyatwa, the country’s biggest public hospital in Harare. “Some women are developing complications of ruptured uteruses and experiencing prolonged labor, which leads to brain damage of their babies.”

The education system has fared no better. In 1990, spending on education equated to more than 12% of gross domestic product. By 2018, the ratio had slipped to just 4.6%, World Bank data shows. Funding cutbacks have left schools without essential teaching materials and demotivated staff, some of whom skip classes to work second jobs to try and make ends meet. Many of the country’s more experienced teachers have emigrated.

“Our school looks like something from a war film, because I doubt it’s been painted in 25 or 30 years. There are broken windows, crumbling walls and we don’t have water,” said Tawanda Chikondo, a 29-year-old teacher in Makonde, a rural area north of Harare, who is trying to emigrate to the U.K. or Asia. “This is Zimbabwe, can you imagine? Africa’s most-educated nation has to teach children under trees because the classrooms are squalid and unkempt.”

While Zimbabwe experienced hyperinflation of 500 billion percent in 2008 and, as a result, was forced to scrap its worthless currency early in 2009, this year’s crisis seems worse to many.

The reintroduction of the Zimbabwe dollar early last year has seen the value of civil servants’ salaries collapse to about $40 a month from more than $400. Surging inflation has also made a comeback, with the rate currently standing at more than 800%.

What’s been hardest for many Zimbabweans to accept is that Mnangagwa’s assent to power was seen as a fresh start — as evidenced by the tens of thousands of people that poured onto the streets to celebrate the end of Mugabe’s 37-year rule in late 2017. The change in power was also welcomed by the U.S. and the European Union, which had imposed sanctions on members of the Mugabe administration, even though it was to all intents and purposes a coup. Mugabe died in September last year at the age of 95.

Mnangagwa, 77, who was Mugabe’s right-hand man for half a century before falling out with him, spent much of his first few months in office visiting foreign capitals and repeating the mantra that “Zimbabwe is open for business.”

His assurances haven’t translated into an influx of foreign capital. While the government has announced $30 billion of investment plans, there’s little evidence of them materializing. And relations with multilateral lenders, soured by $8 billion in unpaid debts, are yet to be restored.

“I had high hopes when President Mnangagwa came into office. I attended his first inauguration. He said all the right things, you could sense the euphoria on the streets of Harare,” said Ian Khama, who was president of neighboring Botswana at the time. “I am really very, very disappointed. In Zimbabwe, they tell you the situation is worse than under Mugabe.”

Frustrated by the deteriorating economy, Mnangagwa has heaped blame on the private sector. He described unidentified companies as “wolves in sheep’s clothing” shortly before curbing the activities of Econet Wireless Ltd., accusing its mobile money unit of weakening the currency.

For more on the dispute with Econet, click here

Mnangagwa’s Cambridge-educated finance minister, Mthuli Ncube, is optimistic the economy can be put back on track. He’s touted improvements in reducing government expenditure and laid out a plan that will rely on investments in mining and infrastructure to turn the nation into an upper-middle income country by 2030.

Most analysts see that as wishful thinking, given the dire state of the nation that Mnangagwa inherited from Mugabe and the increasing isolation of his government.

Mnangagwa “was handed a poisoned chalice but there was a lot of international goodwill that they have squandered,” Chikohomero said.

It’s just Africa reverting back to the mean now that the colonialists have left. They should be happy, the cleansing is complete.

Where is the talked civil society’s outrage?

and opposition to the decay as with “cruel colonialism”?

The ANC assisted in Zimbabwe’s demise by pushing Mugabe back into power.

The overseas election observers also assisted when they did not insist that overseas Zimbo’s can vote, during the last election.

There is only one problem in Zimbabwe, that is ZANU-PF.

This is not news, we all saw it coming and so did the world. As with SA they forced us to hand the keys to the Rolls Royce to the children.

Now that it has been wrecked they look the other way……….

Notice how the actual causes of the demise are glossed over in one sentence because, at the time, it was pretty much accepted by the UN etc. There were some limited sanctions against individuals but these were not universally enforced and definitely not by SA’s ANC regime which supported Muagbe and ZANU PF’s looting, economic destruction and impoverishment programme 100%, often to SA’s detriment. The “programme” itself is a blueprint for what is happening in SA.

To call it a “programme” would suggest that detailed foresight and planning was involved. It is actually more akin to gravity. A simple natural phenomenon in which the expected result will be achieved.

Maybe china will buy it

It all started with the destruction of property rights. The Zimbabwean economy hangs on a string. That string is the SA economy. SA implements the same stupid policies. Once the SA economy collapses Zimbabwe will move to new lows.

And sadly Ladies and Gentlemen – South Africa is next on the list.

The comment – Mugabe spent his first decade in office augmenting the advanced infrastructure and institutions that the whites-only government had built – says it all.

BLM
Or they don’t…
You decide.

Only if you can squeeze some cash out of it by playing the victim and demanding restitution – preferably in US$ or in GBP.

The real stuff will hit the fan once the Army will not get paid.

“which leads to brain damage of their babies”….future majority party voters.

Very sad seeing what is happening in Zimbabwe (borders on criminal).
Zimbabwe could be one of the richest countries in Africa.
South Africa would have a bonanza in economic growth like never before.
Zimbabwe would buy our products.
The Rand would strengthen by 100%, our GDP growth would be double digits.
Our unemployment would drop to 4%
–A very possible dream