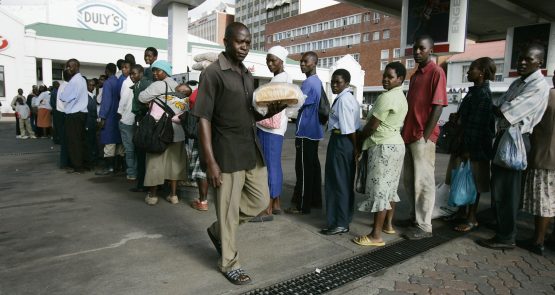 Three young guys stood at the checkout counter at the supermarket a few days ago with their shopping: 6 buns, a dozen slices of polony, one 750 ml bottle of cold drink and a small cream cake. I waited while they tried to work out how much the shopping was going to cost, how much the government’s punitive 2% tax on the purchase would be when they paid with their mobile phones and if they had enough money between them to buy the food. One of the youngsters saw me waiting and asked me to go in front of him while they did their calculations. After I’d paid for my shopping the three youngsters put their items on the counter and lifted the small cake (perhaps 10cm across) to the side, obviously not going to have enough to pay for it. “Can I pay for your shopping?” I asked them.  One youngster put his hand on his chest, swallowed, and replied: “Oh yes please, thank you.” He turned to his friends and told them and everyone was smiling and we all introduced ourselves. Two were doing an in-house apprenticeship, the third was their ‘young brother’. One asked me why I wanted to help them and I just said: “Life is so hard for all of us; who knows, tomorrow you may be able to help me.” I paid and we all parted smiling.

That was a week ago before Zimbabwe’s next nightmare began.

Last the Zimbabwe government abandoned their grip of the exchange rate which they have controlled since February 2019 when they converted all of the US dollars in our bank, saving, insurance and pension accounts into Zimbabwe dollars. At the time, in Feb 2019, they said the rate was one Zimbabwe dollar to one US dollar but we couldn’t get our money out of the banks because they had no bank notes so our hands were tied. On February 28, 2019 the government set the rate at 2.5 Zim dollars to one US dollar, so every 100 US dollars we’d had in the bank was only worth 40 US dollars but we still couldn’t get our money out of the bank to convert it.

Over the following nine months the “official” rate crept up until by December 2019 the rate was 16.8 Zim dollars for one US dollar but there was still no money in the banks. By Christmas 2019 every 100 dollars we had in the bank was only worth 6 US dollars. In less than a year the grand heist was almost done. All our US dollars were gone, private pensions which we had invested in US dollars were now Zim dollars and worth only 6 US dollars for every 100 we had paid in. Life savings and investments were gone.

At the end of March 2020 the government rate stuck at 25 Zim dollars to one US dollars. Every 100 dollars we’d had in our accounts was now only worth four US dollars. We went into coronavirus lockdown and the black market rate for US dollars went crazy and is now 100 Zim dollars to one US dollar. Meanwhile inflation kept on running from around 17% back in late 2018 to 540% in February 2020 and estimated by international economist Steve Hanke to be around 840% today.

Last week the government ‘floated’ the exchange rate. They say they will hold a weekly auction of US dollars and the average bid will be the exchange rate for the next week. The first auction was held on Tuesday last week; 10.3 million US dollars were auctioned and the exchange rate set at 57 Zim dollars for one US dollar. The minimum bid in the auction is 50 000 US dollars which effectively excludes all small business and companies and they will still have to look for US dollars on the black market and this week pay 100 Zim dollars for one US dollar for their imports. Shops are now required to display their prices in Zim dollars and US dollars using the official auction rate of the week, regardless of the rate they paid for the US dollars used to purchase the goods and not knowing what the rate will be when they have to buy more US dollars to restock their shelves. You have to be a masochist, a mind reader or downright daft to be in business in Zimbabwe today; it’s a far cry from the government’s election mantra that Zimbabwe is ‘open for business.’

The immediate response to the first US dollar auction was an increase in the price of fuel from Z$22 to Z$72 a litre overnight. Most of us haven’t even dared to go into the shops yet to see what this has done to food prices; we’re too busy making another hole in our belts to go out using fuel we can’t afford to go looking for food we can’t afford. For the majority of ordinary people who had all their US dollars “converted” to Zim dollars by the government fifteen months ago, this is our worst nightmare.

I’m not an economist or an exchange rate expert but what I do know is that for three young lads trying to buy a small bag of food at the supermarket, the price for those same items will be at least double by now. In April 2020 the World Food Programme said there were seven million Zimbabweans in urgent need of humanitarian assistance across the country. What must that number be now? God help Zimbabwe. It is little wonder the police have re-armed themselves with their home made spikes on our highways this week.

This is where citizens should use Bitcoin and or a stable crypto coin that is decentralised and beyond the control of the government.

I feel for the average person who is trying to merely exists let alone be productive in a society where a heavy fist is used to rule in the name of democracy.

Where are the Americans and their Democracy Soldiers?
Why is the world just standing by and watching or ignoring this genocide?
When will South Africans wake up and see for their own eyes ?

Just like there is no punishment for Too Big to Fail companies, there is no disincentive for governments who starve their people.

At best we live in a world of selective justice and for Profit Wars.

Bitcoin and other crypto coin are born dead.

Yes. She traded with it. It is good for speculation and nothing else. Now let us hear from those who lost a million.

Stupid solution. For a population with a lack of quality education, lack of infrastructure i.e electricity. what makes you think these ordinary Zimbabweans have the means to turn to crypto?

According to https://www.nationmaster.com/country-info/compare/South-Africa/Zimbabwe/Education#2014 Zimbabweans are better educated than South African even if it s by a small margin.

Who is now stupid, you are on a boat that is sinking which has an even dumber population than the northerly neighbours Who have hit rock bottom.

@PureCoin – I suggest while you are in your cozy office chair typing away, book yourself a flight to Harare and conduct some meaningful research ON THE GROUND. I see the link you shared is way back from 2014.

Just to add I’m no longer on that boat you refer to 😉 Don’t be mad you’re still on it. You are the stupid one – Good Day to you.

Just another failed african country destroyed by their government

Not only by their government, but by their voters too. This is in fact a far bigger problem: the refusal of African voters to act in their own interests.

No comment from the ANC about the destruction of ‘Black Lives’ in Zimbabwean. Maybe they are too busy making sure the same will happen in South Africa to notice.

As some one said above, just another failed African state. Yet the population has voted for the same party for forty years. Where is the logic in Africa?

The cruellest thing that an advanced society can do to a collectivist society is to support their right to determine their own future by giving them power over the legislature. This is a recipe for disaster and this recipe is baked into the cake all over Africa. This is why Margaret Thatcher did not support the idea of an ANC government. She knew what that would lead to.

The people dance and rejoice when they gain this power to turn their reality into a manifestation of their mindset. They call this freedom. Freedom without accountability is loaded shotgun in the hands of a child.

How do you turn this phenomenon around? It is impossible to turn around. Nature will run its course and bring equilibrium between the size of the population and the size of the economy, as it has always done before property-rights were invented.

And yesterday the Zim VP blamed the whites for not teaching them how to run a country.

Can’t recall them asking, they just took it and heeded no advice at all.

The alternative to blaming others is to take responsibility, and we know that is impossible for politicians in general…

Although she writes about Zimbabwe current affairs, I regard her as “futuristic” (for SA), in the sense that happens in Zim, will in turn happen in SA in the distant future.

(How far ahead you may ask? It depends on how many skilled, western-inclined citizens decide to remain in SA to “make things happen”, versus how many emigrate the next decade or two) Raees Carim – Founder, PharmaGo: ‘We’re trying to keep things as lean as possible and focus on medication delivery, but we’re looking to expand into categories such as health, wellness and beauty.’ 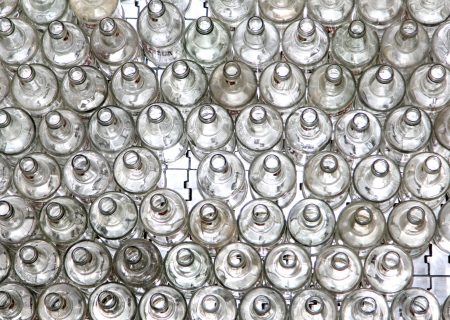