By remaining in the post beyond May 16, the 60-year-old effectively abandoned his short-lived campaign for the highest office in Africa’s largest economy.
By William Clowes, Bloomberg 18 May 2022  07:47 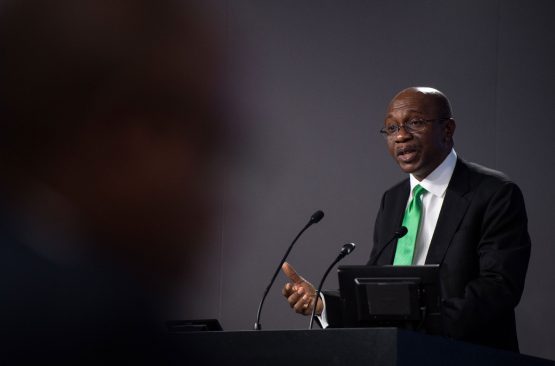 Nigeria’s central bank governor ended his bid to become the country’s next president after his highly visible foray into party politics.

Godwin Emefiele missed deadlines set by the ruling All Progressives Congress and President Muhammadu Buhari to formalise his candidacy and resign from the central bank. By remaining in the post beyond May 16, the 60-year-old effectively abandoned his short-lived campaign for the highest office in Africa’s largest economy.

Emefiele sparked a backlash when his lawyers asked a federal court in the capital, Abuja, on May 5 for a ruling permitting the governor to remain at the head of the central bank while competing in the APC’s upcoming presidential primaries. Party spokesman Joseph Morka said Emefiele did not submit his candidacy forms by a May 13 deadline.

The governor at no point involved himself in “partisan politics,” Osita Nwanisobi, the central bank’s spokesman, said by text message. Emefiele said on Twitter on May 7 that, while supporters had purchased APC nomination forms on his behalf, he was still deciding whether to enter the race. This was two days after filing the suit that said he “desires to contest elections as president” and should be allowed to compete in any political parties’ primaries.

Buhari made the lawsuit redundant by issuing a directive on May 11, copying Emefiele, ordering ministers and political appointees planning to run for office in elections scheduled for February to resign by May 16.

Critics argue that a partisan actor should not be in charge of the independent central bank, which could be used to boost his party’s fortunes. “Nigerians have to watch in utter disbelief how the rule of law and economic commonsense are being undermined,” said Mosope Arubayi, an economist based in Lagos.

Before the furor provoked by the governor’s legal antics, cabinet members had expected to hold on to their portfolios while campaigning. Some of them such as Justice Minister Abubakar Malami and Labour Minister Chris Ngige have since ended their campaigns in favour of staying in government.

While Emefiele appears set on continuing in his post, it’s far from assured that he will be able to.

After a closed door meeting with Buhari on May 12, the governor told reporters he was “having a lot of fun” giving them a “heart attack” by not clarifying his ambitions. The main opposition Peoples Democratic Party described the statement as “provocative” and insisted that the governor resign.

Now that he has been confirmed to be a card-carrying member of the @OfficialAPCNg, Mr. @GodwinIEmefiele must forthwith steer clear of the CBN as he cannot continue as the Governor. Anything short of that amounts to testing the will of the people and the @OfficialPDPNig will…

Emefiele violated legislation that requires the central bank’s top officials to devote all their time and energy to the organisation, according to Kingsley Moghalu, a former deputy governor of the Abuja-based bank who is running for president for another opposition party.

The central bank governor’s unorthodox interventions in the economy -– propping up the naira, shoring up government finances and lending money to farmers, traders and the Nollywood movie industry –- have been controversial. However, his policies have largely aligned with Buhari’s goals including supporting the currency and rationing foreign exchange for imports.

His brief flirtation with party politics has intensified existing suspicions around his independence in the supposedly apolitical post.

“Even if Governor Emefiele is no longer interested in seeking the presidency, he must still resign as his partisanship is no longer in doubt and therefore dangerous for the coming elections,” the Daily Trust, a Lagos-based newspaper, said in an editorial on May 16.