China’s ambassador to Zambia said his country would welcome more competition with the US in Africa — if it brings more benefits to the continent.

While China is not seeking to compete with the US, it has “no fear of the US stirring up the trouble,” Ambassador Du Xiaohui said at an event Thursday in the capital, Lusaka, to address his country’s role in Zambia’s debt restructuring. China wants competition to have “more mutual benefit to our Zambian friends,” he said.

China is Zambia’s biggest bilateral creditor, accounting for almost 75% of the total, and is co-chairing a committee negotiating a debt restructuring after the country became Africa’s first pandemic-era sovereign defaulter in 2020. Relations between the two sides have cooled since President Hakainde Hichilema won power a year ago, as he has forged closer links to nations including the US and the UK.

That shift contributed to delays on the debt revamp that wasn’t resolved until Hichilema spoke with counterpart Xi Jinping on May 31. 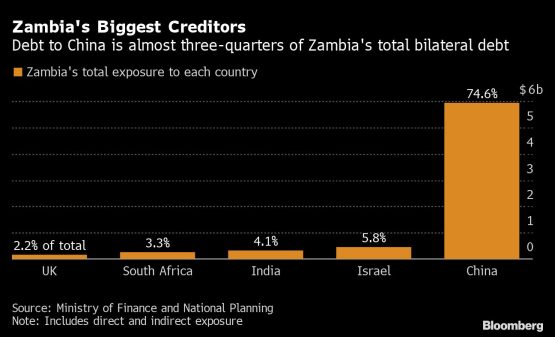 If the US wants to compete with China in Zambia and in Africa, then it should do so in the form of projects such as multibillion-dollar, China-funded hydropower Kafue Gorge Lower project, Du said. He referred to the facility that will generate 750 megawatts of electricity and earn $1 million a day from power sales “a money printer made in China.”

Du also reiterated Chinese criticism of US House Speaker Nancy Pelosi’s visit to Taiwan this week, saying the move “gravely undermines peace and stability across the Taiwan strait” and “has a severe impact on the political foundation of the China-US relations.”

Zambia announced in 2020 it needed to restructure external debts that grew to $17.3 billion by the end of 2021. It’s doing so under the Group of 20’s Common Framework rules. The framework incorporates the Paris Club of mostly rich creditor countries as well as China, which isn’t a member, but is the world’s biggest official bilateral lender.

China initially resisted joining Zambia’s official creditor committee under the Common Framework, as it wanted to rather negotiate a debt revamp bilaterally, said Du. It took Hichilema’s call with Xi to convince China to sign on, he said.

Du praised the “speed” with which the creditor committee — co-chaired by China and France — has worked, holding two meetings in June and July before announcing the lenders agreed they were ready to negotiate a restructuring. China earlier this year faced blame for delaying the process. Lenders from the country are ready to move ahead, he said.

“If the official creditors from China agree with the restructuring process, then the private sector from China will follow a comparable manner to deal with the debt issue with Zambia,” said Du. “There is an invitation from co-chair China to other private sectors to have a friendly conversation about the Zambia debt issue, in this month.”

Zambia plans to sign a memorandum of understanding with official creditors by the end of the year, the Finance Ministry said Thursday. Under the Common Framework, that legally non-binding document sets the key parameters of the restructuring, and the government will then sign bilateral deals with each creditor.

While Du said China’s current relations with Zambia were “a very tough topic to deal with in front of cameras,” his country has no intention of intervening if the southern African nation builds relations with its competitors.