Yabsira Tadesse had no trouble getting a new SIM card when he popped into an Ethio Telecom store in northern Addis Ababa the other day. He still thinks it’s terrible that the state-owned behemoth is the only option for phone and internet users in a country of 100 million.

“The status quo is terrible,” the 22-year-old student said, standing next to a dirty sign displaying the company’s green logo. As the owner of a fledgling cryptocurrency business, Yabsira is dependent on Ethio Telecom’s occasionally patchy service. He also said he fears the state uses the group to spy on him. If a new wireless carrier “can come here and government lets them be competitive, I would be the first to line up and support it.”

Yabsira’s wish may be about to come true. As part of an ambitious reform program, the government of prime minister Abiy Ahmed plans to award telecommunications licenses to two private operators next year, and sell a minority stake in Ethio Telecom. The hope is the move will boost foreign direct investment into an economy long hostile to international companies, while expanding internet services in rural areas.

The potential downside for any bidder: Operating in a country that’s prone to turning off the internet for political reasons, where violence and anti-government activity remains prevalent and where Abiy and his promises of reform face significant opposition, including from within the ruling coalition he leads.

Johannesburg-based carriers MTN Group and Vodacom Group have been quick to express an interest in the auction, as has French operator Orange SA, which operates in African countries from Egypt to Ivory Coast and once had a partnership with Ethio Telecom. More may put up their hands, including Airtel Africa, which recently spun out of its Indian parent, Bharti Airtel, and Abu Dhabi-based Etisalat.

Ethiopia is “close to being an absolute exception in the world,” Orange deputy chief executive officer Ramon Fernandez said in London, referring to the closed-off nature of the market. The Horn of Africa country has “a very bright future.”

Up for grabs is access to Africa’s second-largest population and a growing market where the license winners can profit from higher-margin data and mobile-money services. What’s more, the $80 billion economy is set to grow at about 7.2% a year through 2024, according to the International Monetary Fund.

Expanding on the continent has hardly been plain sailing. MTN, the continent’s market leader by subscribers and revenue, has been plagued by government and regulatory disputes in Nigeria, its biggest market. MTN shares have halved in value over the past four years.

Vodacom, majority-owned by the UK’s Vodafone Group, is fighting the removal of its 2G license in the Democratic Republic of Congo. Millicom International Cellular SA has decided enough is enough and is trying to exit the continent completely in favour of Latin America. MTN, Orange and Vodacom will have to ensure the regulatory structure will let them generate sufficient returns before committing to Ethiopia, said John Davies, an analyst at Bloomberg Intelligence. “If the upside is shared rather than all going to the government in the form of enormous license fees, then it’s relatively attractive,” he said.

Other barriers to entry include ethnic unrest and opposition to Abiy from factions within the ruling party. Last month, the head of the army and a state president were among five government officials killed in violent attacks. No one has claimed responsibility. The government switched off internet access for 10 days in the aftermath of the assassinations, a measure likely to ring alarm bells for the prospective owners of new telecom licenses.

Undeterred, Orange’s Africa CEO, Alioune Ndiaye, travelled to Addis Ababa last month — before the killings — alongside other potential entrants to meet local officials and gather information about the auction plans, Fernandez said. And CEO Stephane Richard was part of a business delegation that in March accompanied French President Emmanuel Macron to Ethiopia, and described the country as “a priority for our development in Africa.”

Revenue and profit growth rates in the region are stronger than the “tepid rates” Orange is experiencing in Europe, according to Stephane Beyazian, an analyst at Main First. That said, “operating in those countries isn’t always a walk in the park. Currency as well as geopolitical risks come to mind.” 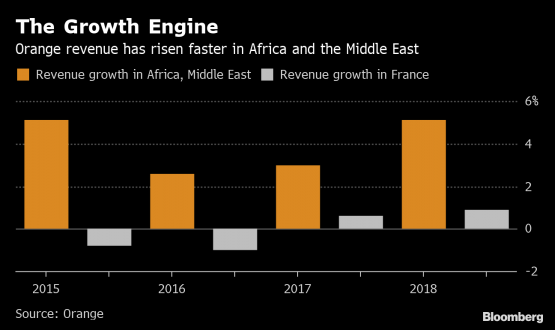 Africa and the Middle East represented 13% of Orange’s total revenue last year, compared with 44% for France. And while it had a mobile base of 120 million customers there at the end of March, only 17.6 million were premium 4G customers.

MTN CEO Rob Shuter said in a May interview that Ethiopia was a market “where we would be really excited to participate in some way.” Few large markets are both “under-penetrated” and have the scope for a No. 1 or No. 2 operator, he said.

In Airtel’s prospectus, published ahead of recent listings in London and Nigeria, the carrier highlighted the continent’s rising urbanisation rates and household consumption. Africa’s middle class, defined by Deloitte as those with earnings between $2 to $20 per day, is forecast to grow to 582 million people by 2030, representing 34% of the total African population.

“There is an emerging middle class, there is economic growth, and there is an under-penetrated market for the services we can offer,” Orange’s Fernandez said. “Our track record in Africa shows that we are committed to be there, not on a stop-and-go basis, but on a durable basis.”