How to ignite economic growth in SA 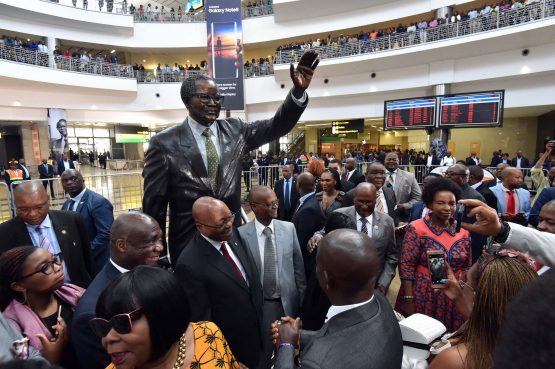 Political turmoil was a significant deterrent to new investment in South Africa and is hampering the country’s economic growth, an analyst has argued.

“Unfortunately, that is the case in an awful lot of African countries right now – it is very discouraging,” Melissa Cook, managing director of New York-based consultancy African Sunrise Partners told Moneyweb ahead of the CFA South Africa Annual Conference.

Asked what South Africa could do differently to improve its economic growth outlook, Cook warned that the turnover in finance ministers, questions about the utilisation of government funds and the “bottomless pit” at some state-owned enterprises were all areas of concern.

“I think it would be very productive to liberalise and privatise some of the state-owned enterprises whether it is Eskom or SAA or Transnet to force them to become more competitive and then that also, I think, would lead to further innovation.”

Finance minister Malusi Gigaba will be under pressure to address corruption and wastage at state-owned enterprises when he presents his maiden Medium-Term Budget Policy Statement (MTBPS) to Parliament on Wednesday. With economic growth and tax revenues lower than anticipated, analysts expect the budget deficit to deteriorate significantly and Gigaba will need to demonstrate that government is serious about sticking to its path of fiscal consolidation, but it is highly unlikely that state-owned enterprises will be privatised.

Cook said innovation has been an engine of growth in Kenya as well as Nigeria. South Africa has the same potential, but it has a significant challenge with regards to its level of education.

“In this increasingly competitive world that we live in where automation is a factor, your workers need to be capable of developing new skills as they work and I don’t think the South African education system has really helped young people to develop and that is why you have such high unemployment.”

Cook said particularly in frontier markets in Africa (South Africa is considered an emerging market), there is often a mismatch between the thinking of governments around their needs and competitive advantages for attracting investment, and investors, who are fiduciaries for the beneficiaries of their funds.

“It is not the job of private sector investors nor frankly should it be the job of governments to blindly invest just because they think that they need something.”

She said it is clear that many governments needed infrastructure to fuel growth, but without a framework that worked for private sector investors, it is difficult to create a sustainable power sector (for example). It is therefore important for governments to merge their thinking with that of the private sector to attract investments, achieve their growth goals and add economic value.

While a government might need roads to be built, such projects were unlikely to entice investors because there was no revenue associated with these roads. It is arguably easier to lure investors to sectors like ports, railroads, airports, communications or power where there is a very clear revenue stream associated with the investment which could be securitised in some way. Basic education, basic roads and some level of primary healthcare should be the government’s responsibility, Cook argued.

An investment that generated a return of less than its cost of capital is destroying value. This was the basic premise for portfolio as well as foreign direct investment, but the concept is not very well understood by governments on the continent and to a large degree by smaller family companies in the private sector who often have to compete with Chinese firms, she said.

“The cost of capital in Asia is very, very low and they are able to accept very low returns and if you come into a market like Kenya or Nigeria where the bank rates are in the high teens you as a local company have a very difficult challenge.”

In order to ignite economic growth you have to fix what is broken. The ANC have now run out of other peoples money (as socialists invariably do) and there is a R40 billion hole in their budget.

The problem is simple- there are too many tax receivers (including the something for nothing brigade) and too few tax payers, the numbers of which are shrinking. The ANC have been waging a war on business and white people for 20 plus years and they are unfortunately winning – simply because they have the guns. Force or threat of force- the socialist way. No wonder they hate private gun ownership. The bandits, drunk with power and Dunning Kruger, cannot realise that the R40 billion hole is counterbalanced by over 1 million skilled emigrants, millions of jobs that never were and billions of rand in capital that has fled their ongoing depredations. AA, BEE, minimum wages, employment legislation, mine royalties, cadre employment, punitive taxes, racial incitement to genocide, handouts for the masses and skyrocketing sovereign risk. Finally the chickens come home to roost 23 years on.

At the end of the day it is all about responsible governance. Nothing more. The ANC cannot. They cannot even comprehend the consequences of their folly.

“An investment that generated a return of less than it’s cost of capital is destroying value.
This was the BASIC premise for portfolio as well as foreign direct investment, but the concept is not very well understood by governments on the continent”

Ha ha, what’s Melissa Cook trying to say here, that Africa is run by idiots ?
Geez, the nerve of these white monopoly capitalists.

– sell SAA, Prasa and Petrosa
– end Eskom’s monopoly on energy by opening the sector up to the private sector.
-privatise water supply and distribution to some degree
– fire Shaun the sheep and bring in a non-politically linked NPA head.Couple this with a priorty crime fighting unit like we had with the early-stage scorpions. Create a bi-partisan oversight committee to whom this unit reports, made up equally between the 3 largest parties in parliament.
-reduce university student numbers by 50% cut in govt backed fee schemes. Unless you have the academics to deserve a govt bursary, you should not be there.
-create a specific NPA/Scorpions unit that focuses entirely on state corruption – investigating everything related to the govt purse – tenders, hires, JV’s etc.
-focus on reducing economies dependence on 1st stage goods (commodities) and focus on developing manufacturing skills and technology skills.

took my 3 minutes to write – surely someone in govt can do better?

Political turmoil…“Unfortunately, that is the case in an awful lot of African countries right now – it is very discouraging,” was a significant deterrent to new investment in South Africa…

the reality, no matter how politically incorrect needs to be spelled out as well, If not for WM rule SA would have already looked like Zimbabwe, which it’s fast becoming a mirror image of anyway, but at least South Africa enjoyed years of industrial and economic evolution under WM rule and maybe I am wrong and SA would be far more prosperous if the ANC had govern it, from a hundred years ago,…would SA been any different as the rest of the African continent.

“Well it is clear to see that the South African govt. has given up on reducing the fiscal debt and is comfortable with the mounting foreign debt” … as quoted on Bloomberg … sounds about right to me.