Lockdown fatigue spreads quicker than the coronavirus in Africa

Economic impact proving too costly for poorer countries.
By Pauline Bax, Bloomberg 17 May 2020  09:53 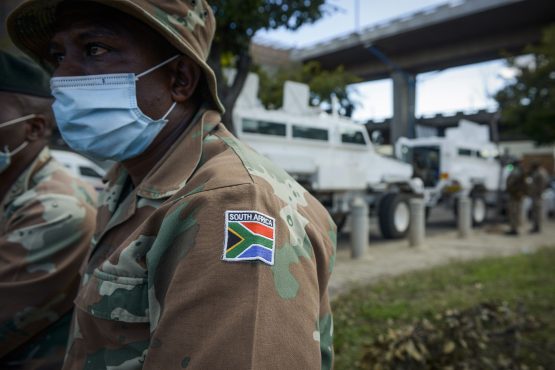 A soldier from the South African National Defence Force wears a protective face mask during a patrol at Mary Fitzgerald Square in the Newtown area of Johannesburg. Image: Waldo Swiegers/Bloomberg

Two months after most African nations closed their borders and imposed lockdowns to contain the spread of the coronavirus, they’re deciding it’s not worth the economic cost.

Countries began shutting their economies soon after the first case was detected in Nigeria in February and before the disease started to take hold on the continent. That helped keep Africa’s reported case count well below 80 000 out of a population of some 1.2 billion people. But as the pandemic risks dragging them into the worst economic recession on record, governments from Ghana in the west to Rwanda in the east have started to ease restrictions.

Faced with an impossible dilemma — starvation and deepening poverty or a wider outbreak — many leaders are opting to save people’s livelihoods.

“Africa is now victim of its success,” said Nana Poku, a political economist and vice chancellor of the University of KwaZulu-Natal in South Africa. “Thanks to a strong public-health response, we have kept the number of infections and deaths relatively low. Compared to those numbers, the economic cost of Covid-19 in terms of lost output and increased poverty seems very large.”

The first country in sub-Saharan Africa to ban travelers from high-risk countries, Ghana also led the way in easing curbs when it lifted its 21-day lockdown on April 20. Even though the number of confirmed cases subsequently increased five-fold after the easing, the situation had become financially untenable in a country where the informal economy accounts for 90% of employment, the government said.

“We can’t stop economic activity in our country, our social lives, our children’s education, so we need to do something that will enable us to live our normal lives,” Health Minister Kwaku Agyeman-Manu said May 14. “We should begin to accept the fact that the disease will be with us for a while.”

Ghana’s neighbours are following suit. Ivory Coast on Friday began lifting a curfew in its biggest city, Abidjan, allowing restaurants and bars that play an outsized cultural role, similar to those in France, to reopen immediately. Mosques and churches are being allowed to receive worshipers again from this weekend in Burkina Faso, where many people see Covid-19 as a flu that mainly affects the rich and adherence to restrictions is low.

In Nigeria, a five-week lockdown of the two main cities was only half-heartedly observed, with traffic jams and crowded streets persisting. Exasperated by dense queues at banks and residents venturing outside without face masks, the governor of Lagos warned this week that a new lockdown may be imposed if people continue to flout public-health guidelines.

As many as 190 000 people could die of Covid-19 and 44 million could be infected in Africa in the first year of the pandemic if containment measures fail, according to the World Health Organization. The body has urged a gradual easing of lockdowns to avoid a surge in infections.

“Containment measures, which include contact tracing, isolation, improved personal hygiene practices and physical distancing aim to slow down the transmission of the virus so its effects happen at a rate manageable by the health system,” the WHO said May 7. “Physical distancing is not about the confinement of people, but rather avoiding unnecessary contacts as people live, work and socialise as a means to interrupt transmission.”

In South Africa, which has the continent’s highest number of confirmed infections, the government is taking the gradual approach — on May 1 it began relaxing one of the world’s strictest lockdowns in place since March 27.

But with thousands of small businesses at risk of collapse and the central bank expecting the economy to shrink 6.1% this year, business leaders and mining companies are asking the government to reconsider its rules and accelerate the easing of restrictions.

The country’s largest platinum miner, Sibanye Stillwater, urged President Cyril Ramaphosa this week to let mines run at full capacity in order to avoid a complete shut-down. Even though miners have been allowed to restart operations with half their normal workers, that isn’t sufficient, chief executive officer Neal Froneman said.

“We are causing more harm by constraining the economy than we are impacting positively on Covid-19,” he said. “We have gone too far now, we now need to get the economy to start up.”

The real emergency may not be the virus, but the fallout from the pandemic, said Leena Koni Hoffmann, associate fellow of the Africa program at Chatham House in the UK.

“Tens of millions of people across the continent were already in vulnerable situations before this,” she said. “The cure for the pandemic, especially in African economies, is worse than the virus itself.”

That is called Africa Pragmatism.

When they lift the ban on alcohol, South Africans are going into a binge drinking spree the likes that have never been seen before.

That’s no maybe. My neighbour went on a drinking spree last night and carried on till the early morning hours. No complaints.