Africa is the world’s least-vaccinated continent, with many countries’ inoculation programs dependent on Covax.
By Antony Sguazzin, Bloomberg 5 May 2021  09:09 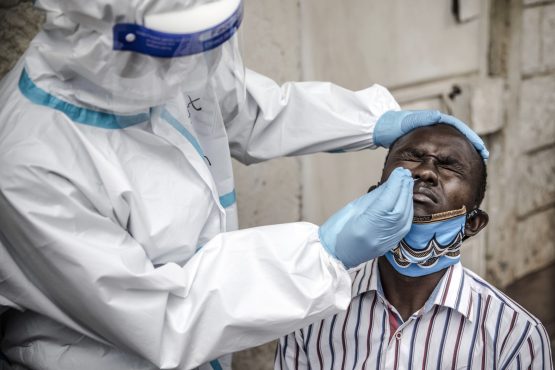 New coronavirus variants have proliferated across southern and eastern Africa, exacerbating the challenge of bringing the pandemic under control, analysis of the genomics data shows.

A strain first detected in South Africa late last year is “completely dominating all infection in southern Africa and seems to be entering East Africa,” said Tulio de Oliveira, director of Krisp, a genomics institute in the port city of Durban, which is leading a group that’s evaluating the data. “Another variant is completely dominating infections in Uganda and Rwanda, and is spreading through truck routes.”

Africa is the world’s least-vaccinated continent, with many countries’ inoculation programs dependent on Covax — a global initiative that aims to ensure there is equitable access to the shots. The spread of variants has raised alarm because some of them appear to be more transmissible than the original virus and may be resistant to some inoculations. The longer populations go unvaccinated, the higher the risk that mutations will occur.

Krisp is working with authorities in more than 40 African countries to collect and analyse all available data so the prevalence of the South African strain and others identified in Nigeria and in travelers from Tanzania can be assessed.

“We do risk that Africa could become a reservoir for variants,” De Oliveira said in an interview on Tuesday. The continent needs to control their introduction and scale up its vaccination plans, he said.

Krisp is credited with first identifying the B.1.351 strain in South Africa, as well as the variant first identified in the travelers from Tanzania. Two months ago, De Oliveira described that strain as the most mutated yet to be detected.

The latter strain has since been found in Uganda and the danger it poses is still being assessed, said Phionah Atuhebwe, the New Vaccines Introduction Medical Officer for Africa for the World Health Organisation.

For now, it has been classified as a “variant of interest” rather than a “variant of concern,” as more research needs to be conducted, she said in an interview.

De Oliveira said the lineage of the strain found in the travelers from Tanzania derives from the original virus first found in Wuhan in China, and is similar to the variant that’s been spreading through East Africa.

“East Africa had a dormant epidemic variant that has been circulating, it has started adding some mutations that could increase transmissibility and the ability to neutralise antibodies,” he said. “It’s quite a concern.”

Two separate strains have been identified in Nigeria, one of which has spread to more than 50 other countries, the Krisp director said.

How do we explain the fact that the political group who complains about overpopulation, greenhouse gasses, global warming, inequality, and pollution, are the same people who are frantically using lockdown measures to mitigate the fightback from nature that aims to solve their initial problems?

But has it been isolated yet?

Thanks to covid19 it exposed all the corruption,democracy and exceptionaliism as a fraud, where racism,bigotry,misinformation originates from and leaders that do not care for the poor or its citizens.

Only deaths with genuinely verified cause of Covid matter. The rest is irrelevant fear mongering, which translates to everything the bribed and synchronised media concocts and most of what the political pedlers spout. The flu has always generated new strains. The flu has always targeted those with compromised and impaired immune systems. New strains can be more or less virulent but as resistance builds in the population so the impact diminishes. If this did not happen we would never hve survived this long. Flu injections have been rolled constantly for many decades, with varying success and constant risk of adverse reactions.
Data is now suggesting that that an injection is killing around half the number that Covid is.