Efforts to crack down on the mining are difficult.
By Hedwig Arinaitwe, Thomson Reuters Foundation 10 Jul 2022  00:52 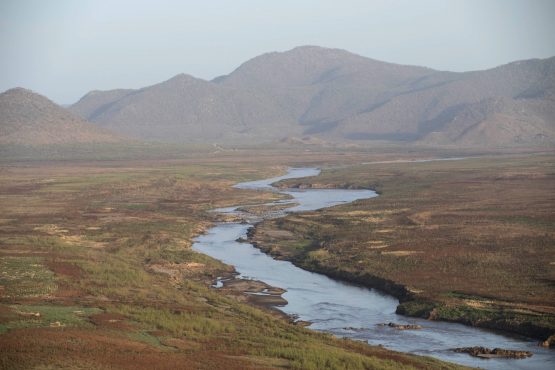 Diana Arinitwe knows the threat posed by the Nyamwamba River in western Uganda all too well.

When the river’s banks burst in May 2020, her home in Kasese district was almost entirely cut off by floodwater. Other residents nearby saw their houses swallowed and were forced to seek shelter in a camp for the displaced.

Now Arinitwe fears her home will be next as authorities struggle to crack down on illegal sand mining at a time when climate change is bringing more extreme rainfall and flooding.

Local experts and officials warn that the largely unchecked trade is weakening the Nyamwamba – creating pits along its bed and banks – and putting communities in ever greater danger of having their homes, farmland, and livelihoods washed away.

“I fear that the sand mining on the riverbank may cause the river to channel more water our way and drive us from our homes,” Arinitwe told the Thomson Reuters Foundation.

Over the past decade, illegal sand mining has become more and more common along the river to meet surging demand for the natural resource for construction and other purposes as Uganda’s population grows and the country becomes more urban.

Efforts to crack down on the mining are difficult in part because some miners in Kasese say it is their only source of income.

Activists have bemoaned a lack of will from local government and police to enforce a nationwide ban imposed last year on sand mining in wetlands.

The ban follows a 2019 environment law that allows the practice in rivers and lakes only with state permission.

Sand mining, often done manually with spades or with excavator trucks in the dry season, reduces the amount of water-holding sand available in the Nyamwamba, cutting its capacity to hold excess water during heavy rains and floods.

That, combined with riverbanks weakened by mining, can mean both more flooding in wet times and less water availability in dry periods.

At some times of year, high temperatures linked to climate change are more rapidly melting glaciers on the peaks of the fabled Rwenzori mountains – dubbed the “Mountains of the Moon” – causing more water to travel down the river and, ultimately, worsening flooding.

People in Kasese said the floods are intensifying each year as a result of sand mining, but noted 2020 was a particularly bad year.

The flooding that May – which threatened Arinitwe’s home – damaged or affected nearly 25 000 houses and 173 000 people, according to a report by local authorities.

The floods have not only caused destruction of homes and displacement but also hampered agriculture in the area.

Muhindo Joselyene, a farmer in Nyakasanga village, said sand mining had channeled mineral-laden water to her farm in 2020, ruining its soil and crops.

“My farm looks like it was cemented – the copper in the water forms a hard upper layer and does not allow crops to grow,” she said.

“I lost a whole two acres of maize when the river flooded, and there was no one to blame, or compensation.”

Every hour, hundreds of tonnes of sand are harvested from the Nyamwamba, local miners say. Most is sold to feed a commercial construction boom in the region, or smuggled across the border into the Democratic Republic of Congo.

Masereka Ibrahim Salim, a 28-year-old sand miner and broker, said he had worked in the trade for more than 15 years and would only leave it if he could find other work that paid as well.

Sand mining has sparked its own economy in the area, with individuals whose own land has collapsed into the river claiming parts of the riverbank and charging sand miners a fee to harvest, despite the fact permits have not been granted, Salim said.

However, when the Thomson Reuters Foundation contacted a cattle farmer who Salim said owned the land where he mines sand, the man said he knew nothing about Salim’s claim. This is the case with many such sites across the Nyamwamba, according to miners.

Law enforcement has been lax in dealing with the problem, and local authorities are not well-equipped to act, said Charles Masumbuko, head of the Alliance for Development Uganda, a civil society group working with communities in Kasese.

Masumbuko said he believed the number of miners and mining spots was increasing as growing floods deposited more sand.

However, in response to questions about sand mining on the Nyamwamba, NEMA spokesman Tony Achidria said the authority does not issue permits for mining on riverbanks and lake shores.

While the sand mining trade has continued unabated despite periodic warnings from the government, various solutions have been put forward to tackle flooding along the Nyamwamba.

“There is not one intervention that will work on its own but several of them will together,” said Happy Ali, a spokesman for the World Wildlife Fund (WWF), which is working in Kasese.