The ban on lending has knocked confidence in an already-burnt banking system.
By Antony Sguazzin, Ray Ndlovu and Godfrey Marawanyika, Bloomberg 13 May 2022  08:04 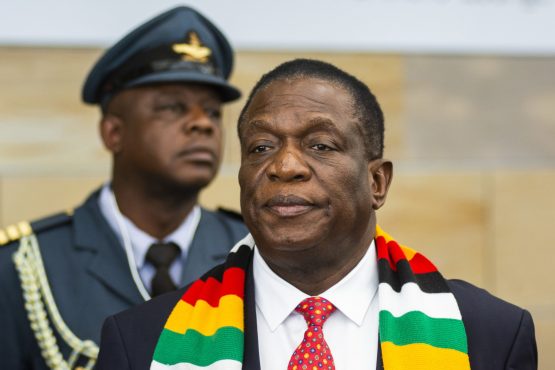 Emmerson Mnangagwa has stymied Zimbabwe’s economy, five years after he declared the country “Open for business.”

Flanked by his finance minister and central bank governor, the president announced in a May 7 televised speech that banks had been banned from lending in a bid to stem the precipitous decline of the local currency. The order threatens to dissipate what little confidence there is in an economy that’s been in turmoil for more than two decades.

It’s the latest in a series of economic missteps that’s seen Zimbabwe ride a roller coaster of hyperinflation and periodic shortages of food and fuel. At the heart of the economic malaise is a currency policy that’s retarded growth, gouged businesses and cost citizens their savings.

“They are desperate to have their own national currency even though they have nothing of value to underpin it,” said Stephen Chan, a professor of world politics at the School of Oriental and African Studies in London.

Export earnings collapsed and the US and European Union imposed sanctions, tipping the economy into a downward spiral that led to hyperinflation estimated by the International Monetary Fund at more than 500 billion percent in 2008. The Zimbabwe dollar was abandoned in favor of the US currency and was only restored in mid-2019 by Finance Minister Mthuli Ncube, an economics professor who has taught at Oxford University.

It hasn’t been a success.

While a precursor to the Zimbabwe dollar was pegged at parity with the greenback in February 2019, it now trades at an official rate of 173, an interbank rate of 280 and a black market rate of as much as 420.

The ban on lending is an attempt to reduce the amount of the local currency in circulation, stifling a flourishing black market and, ultimately, inflation. It’s also hobbled the economy.

An executive at an agro-processing firm, who asked not to be named for fear of reprisal, said his company can’t borrow what it needs to pay 500 farmers for the soy and sugar beans it contracted them to grow, or fund the purchase of inputs such as fertiliser for next season’s crop.

“… lending by banks to both the Government and the private sector is hereby suspended with immediate effect, until further notice,” President @edmnangagwa pic.twitter.com/rYMpIb4B41

“Lending is required to import raw materials, pay salaries, fund working capital requirement and machinery,” Morgan & Co., an investment advisory firm based in the capital, Harare, said in a May 9 note to clients.

Late on Thursday the government exempted producers of commodities including sugar, tobacco and corn from the lending ban, adding to the uncertainty.

Still, the government is adamant the step is necessary.

“Tough policy measures anywhere in the world always attract criticism,” Ncube said in an interview on Thursday. The lending ban “is temporary in order to prick the bubble of speculative activities,” he said.

Nick Mangwana, a spokesman for Mnangagwa, said the lending ban was “initially a bit misunderstood” but there is now a better understanding on why it was necessary.

The government has been one of the key architects of the currency’s demise.

Zimbabwean dollars have been printed to pay for roads, dams, a national census and by-elections, according to the Zimbabwe National Chamber of Commerce. Contractors then quickly converted them into greenbacks fearing the local unit would depreciate — adding to the decline.

“There is a complete loss of faith in the local currency,” the chamber said in a May 9 submission to the finance ministry. “Economic agents are desperately getting rid of their Zimbabwean dollar the moment they earn it.”

The government, itself, has shunned its dollar.

When Anglo American Platinum, which owns one of the country’s biggest platinum mines, offered to pay its taxes in local currency the government declined, Natascha Viljoen, the Johannesburg-based company’s chief executive officer, said in an interview.

“That just talks to the confidence they have in their own currency,” she said. “We are working at ways to make sure we can spend those Zimbabwe dollars in a meaningful way before they obviously lose value.”

The crisis has been chastening for Mnangagwa. When he replaced Mugabe, who had been in power for almost four decades, he promised to open up the economy and bring in investment. Together with Ncube, who he appointed in September 2018, he toured the world clad in his trademark scarf in the colors of the national flag, pleading for investment.

By May 2019, there was nothing concrete to show in spite of announcements of $27 billion of planned investments.

With the country in arrears on $13 billion owed to international institutions, Zimbabwe has been locked out of global capital markets and can’t get assistance from multilateral lenders.

While Ncube has tried to impose some discipline over rampant government spending, he has been helpless to halt the currency’s slide and the economy’s decline. The benchmark interest rate is 80% and inflation 96% — accelerating again after peaking at 838% in 2020.

The lending ban has knocked confidence in a banking system already burnt by past instances where the government turned dollar deposits into local currency. There’s likely to be a growth in loan sharking and a fall in deposits, bankers said, asking not to be identified because they weren’t authorised to talk to the media.

“Ncube was brought in to appear to be an honest broker. He has been forced into currency nationalism,” said Chan of the School of Oriental and African Studies. “The poor man can’t win and the government can’t admit that this is a lost venture.”

The failure of a “revolutionary government” … the message to South Africans is loud and clear. But will anyone with clout be to change our slide down into the Zimbabwean swamp?

Watch this space 5 years from now.