What Africa is doing to tackle its Coronavirus vaccination gap African governments are playing catch-up in vaccinating their populations against the coronavirus, with just 12% of the continent’s 1.3 billion people fully inoculated so far.

Some of their efforts have been woefully inadequate, with the World Health Organisation listing 20 of Africa’s 54 nations that are at high risk of missing a target of dosing 70% of their populations by mid year — the rough threshold it says is needed to end the acute phase of the pandemic. Burundi, the Democratic Republic of Congo, Chad, South Sudan, Cameroon and Madagascar are some of the biggest laggards, having administered less than five shots per 100 of their people. Eritrea has yet to administer any. 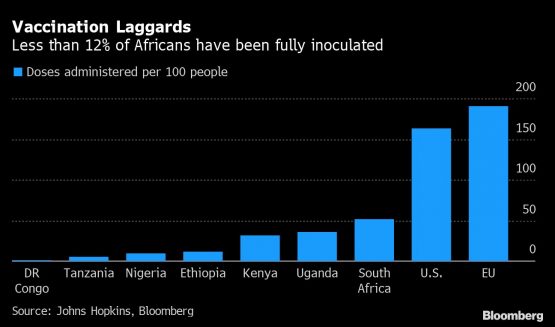 The reasons for the slow take-up range from a dearth of shots, vaccination sites, health personnel and syringes, to hesitancy and complacency.

Here is what select African nations are doing to get their programs up and running:

Tanzania’s inoculation drive only got under way in July last year, four months after the death of President John Magufuli — an outspoken vaccine skeptic. His successor, Samia Suluhu Hassan, publicly got her shot and encouraged her countrymen to follow suit, yet hesitancy remains commonplace. The government began a house-to-house campaign in December to try to raise public awareness about vaccines and convince citizens to get them. Musicians, religious leaders and prominent social media figures have been enlisted to promote the initiative.

An inoculation drive in Africa’s most-populous nation has been struggling to gain traction. The authorities aim to administer 1 million shots a day and have set up vaccination sites at universities, stadiums, car parks and shopping malls to try and reach that goal. Mobile clinics have also been dispatched to rural areas. The government has asked religious and traditional leaders to help it persuade people to get inoculated, while an advertising campaign using catchy jingles has been playing out on social media and radio and television stations that extols the safety and efficacy of vaccines.

Zambia’s vaccination drive is gathering pace after a slow start. Reports surfaced last year of people being turned away from sites because healthcare workers didn’t want to open vials containing five doses and risk wasting some of them if there was no further uptake that day. In December, the health ministry issued instructions that the practice must cease and the shots must be given to all those who want them. In November, proposals were flighted to ban people from government buildings unless they were inoculated, and that government workers had to have their shots to access their workplaces. Those proposals were challenged in court and haven’t been enforced.

Kenya’s campaign is gaining momentum, with traditional and religious leaders being roped in to counter hesitancy. Health officials have been going door-to-door to persuade people, especially the elderly, to get their shots. The government has also embarked on a vaccination drive dubbed “moonlighting” that targets young people and has seen inoculation centers being set up near restaurants and other entertainment venues on Friday and Saturday nights. It’s been a major success, with the number of doses issued over weekends having jumped eight-fold to an average of 160,000.

Uganda is trying to promote acceptance of vaccines and counter misinformation and hesitancy with a mass communication campaign running on social and mainstream media. It has also enlisted the help of community leaders and other prominent figures to promote the shots. In addition to hospitals and clinics, vaccination stations have been set up at markets, football pitches and other venues.

Despite its dilapidated health system and fragile economy, Zimbabwe’s government has run a very proactive campaign. In September, it barred unvaccinated state workers from their workplaces unless they provided medical certificates showing the shots would harm their health, and subsequently suspended them without pay. It is also considering banning those who haven’t been inoculated from using public transport. Authorities in Bulawayo and Mutare, the second- and third largest cities, have begun door-to-door campaigns to take vaccinations directly to residents’ homes.

Africa’s most industrialised nation has procured ample vaccines to inoculate its population but is still confronting widespread hesitancy and apathy. The daily take-up of shots has slowed to less than 70 000, from a peak of more than 300 000. Repeated reassurances from politicians that the vaccines are safe and protect against serious disease have done little to address the problem, and the government now plans to make them mandatory to enter some workplaces and venues.

Mozambique has one of the highest vaccination rates in Africa, despite being one of its least-developed countries. It has made the shots easily accessible, with mobile vaccination teams using motorbikes to reach far-flung rural areas. The country has enough doses to cover the entire eligible population, and is now offering booster shots, according to President Filipe Nyusi.

Rwanda began issuing vaccines in February last year, one of the first African nations to do so, and its program ranks among the continent’s most successful. The government has taken a firm line against vaccine skeptics, with the cabinet announcing in January that the unvaccinated will be barred from public spaces and events.