The country has huge and diverse renewable energy potential.
By Ellen Fungisai Chipango 2 May 2021  00:14 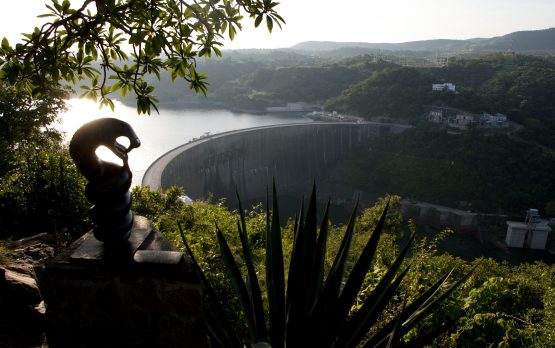 The Kariba Dam, a hydroelectric dam in the Kariba Gorge of the Zambezi river basin between Zambia and Zimbabwe. Image: GettyImagesJekesai Njikizana/AFP via Getty Images

Zimbabwe is one of the African countries that hopes renewable energy technologies will help to address their energy problems. About 42% of Zimbabwe’s households are connected to the electricity grid.

The country has huge and diverse renewable energy potential. Its sustainable energy portfolio could include solar, hydro, biomass and, to a limited extent, wind and geothermal. Zimbabwe put forward a National Renewable Energy Policy in 2019. The policy aims to have 16.5% of the total generation capacity (excluding large hydro) from renewable sources by 2025. This increases to 26.5% by 2030. These are among the goals it has presented to the United Nations Framework Convention on Climate Change and they are promoted in its climate policy.

For policy makers, non-governmental organisations, the private sector and some researchers, it’s a given that renewable energy technologies are the answer. They could meet Zimbabwe’s growing energy demand and achieve universal access sustainably. At face value this is appealing – but the devil is in the details.

My research looked into how renewable energy technologies are understood and how they could alleviate energy poverty in Zimbabwe.

I found that they’re only one piece of the puzzle and other pieces are habitually missing. No matter how well designed and efficient technologies are, their effectiveness is linked to the country’s political economy.

Socio-economic and political factors keep conventional energy out of reach of the poor. My study shows that they can do the same with renewable energy. These factors may even worsen inequality. Adding renewable energy technologies into the existing energy sector structures is like pouring new wine into old wine skins.

I analysed how policy makers and implementers have highlighted some aspects of energy poverty rather than others. This has led to renewable energy being touted as an antidote to energy poverty.

From the data, the following political and economic factors emerged. They explain why renewable energy isn’t a magic bullet for energy poverty:

The politics of energy and technological dependency: China has become a source of finance for large-scale energy projects in Zimbabwe. This is true for both coal-based and renewable energy generation.

What’s seldom acknowledged is the skewed nature of this relationship. China has global dominance in renewable energy technologies. For example, the Chinese solar PV cell and module makers quickly dominated global sales. And the country’s wind turbine producers are poised for significant exports.

The influx of cheap and poor quality Chinese goods to Zimbabwe hasn’t helped. These include electrical equipment such as solar panels.

Energy as a tool of accumulation: For China, energy poverty in Zimbabwe is an opportunity for its economic growth. The unequal distribution of economic power keeps Zimbabwe energy poor. Accumulation is happening at one pole and energy poverty at another. To illustrate this, consider a poor rural household: would it risk investing in a solar panel and a battery knowing that the equipment might be of poor quality?

This isn’t only true for households, but also countries. Because most renewable energy technological resources and expertise are concentrated in China, they would need to be transferred from this region of technological dominance to Zimbabwe. This makes Zimbabwe more technologically dependent.

It’s a vicious cycle where the powerful country invests in these technologies, sells the product in the name of addressing energy poverty, ploughs the profit back in as new investment, and begins accumulation once more.

Renewable energy technologies would work if, somehow, they did more for the poor than for the powerful. But in reality, the opposite is true.

Second, the flawed nature of the tendering system cannot be overstated. It’s normally associated with corruption and political interference.

What’s more, this elite group tends to benefit from the state’s intervention.

In a bid to address the concerns of investors and developers, renewable energy projects are exempted from customs and general excise regulations. This is guided by legislation such as the Value Added Tax Act and its regulations. For the investors and developers, the goal is to increase supply – and for them to benefit in the process – despite the socio-economic problems and inequalities this generates.

Renewable energy technologies are politics by other means. The way forward lies in challenging the political and economic fundamentals of this technology.

Interesting that our dear wokeists that are inter alia focussing on the past sins British & other western nations of having colonised & ‘raped’ Africa apparently have no concern about the ‘new coloniser’.

A simple case of selective truths.

And the Chinese colonisation drive moves into top gear……

Property rights and legal contracts are of no value or meaning in African comunalist societies. They respect only the rule of man or dictatorship. The party with the most money or the biggest army owns everything, and makes the rules.

Entrepreneurs cannot plan ahead or invest, while the new leader who represents the opposing factional interests can confiscate the investment at any time.

Zim had the land grabs, while we have BEE laws and the Mining Charter, which are the same infringements of property rights, only on a much larger scale.

The comunalist mindset will always be colonized because it invites colonialization either through military conquest or by means of voluntary agreements with lenders.

The countries that respect property rights will always rule over, and exploit those who don’t, because the former has the financial means to conquer the latter.

The link at ‘coal-based’ leads to an article about a year old on China-funded projects in Zim, SA and Botswana, and includes the observation that

“[the Chinese] are going places where the environmental standards are low so they can use more polluting equipment that is cheaper to operate. Of 11 coal projects in Africa…that are likely to get foreign support, 10 involve Chinese state-owned entities.”

Whether renewable energy sources support universal access is one thing – the idea seems a little naive to me ; in Southern Africa talk of renewables seems to provide political cover for fossil fuels rather than any substantial commitment to change the energy mix.

Nothing will work with their incompetent government

The 1st thing to assess,is that – are there economic opportunities in Africa – which are being destroyed, ONLY due to, NON-AVAILABILITY OF POWER.

If Yes,then then nature of the extent,of the opportunities lost,need to be laid down

Thereafter,the renewable power sources which are practically possible, for those opportunities,need to be mapped.

If the Grid is deveioped and synched – then,CSP is an option and any where in Africa,as the power,can be wheeled and banked,from the 2 corners,of Africa

If not,then offgrid and localised solar and wind power,is the ONLY solution.HOWEVER,WHERE THE AID AGENCIES GO WRONG,IS IN PROVIDING ONLY SOLAR AND WIND PACKAGES.

The Package has to be ACROSS THE ENTIRE SOLAR AND WIND SUPPLY AND VALUE CHAIN – and also,HAS TO BE INTEGRATED WITH THE ECONOMIC AND FINANCIAL AID PACKAGES TO INDIVIDUALS,WHO TAP THE POWER FOR ECONOMIC OPPORTUNITES.

These Individuals and their bankers,will ENSURE THAT HIGH QUALITY SOLAR AND WIND PROJECTS ARE SET UP and no scams take place.dindooohindoo