The World Bank has committed $12 billion to African countries to support vaccination programs across a continent that hasn’t been able to keep pace with developed nations’ rollouts.

The World Bank money will be in the form of grants or on “highly concessional terms,” said David Malpass, president of the World Bank, in a statement following a January 27 virtual meeting on the Africa Covid-19 vaccine financing and deployment strategy. 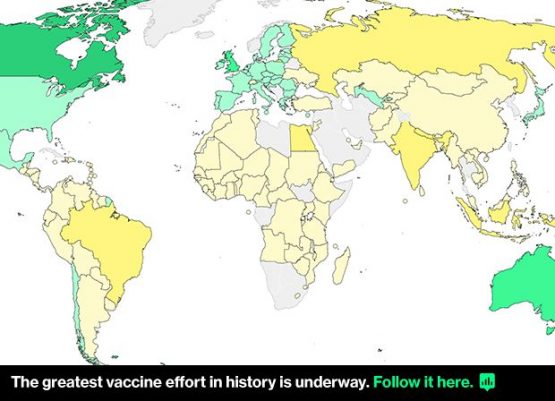 The cost of vaccinating 60% of Africa’s 1.3 billion people would be between $10 billion and $15 billion, according to the Africa Centres for Disease Control.

The continent has secured 36% of its vaccine needs, with 25% of the doses to come from the Covax initiative and 11% from a separate African Union program, Africa’s CDC said. But it’s far behind the rest of the world in terms of acquisition and inoculations, with richer nations having secured the scarce shots early.

“Since the outbreak of Covid-19 last March, the bank has committed $25 billion to African countries to support their health and economic recovery, and we expect to commit an additional $15 billion by June,” Malpass said. “We urge leaders of African countries to move quickly to secure vaccinations for their populations, and to avail themselves of the financing available from us.”

South Africa, the continent’s most industrialised nation, is one country that didn’t move quickly to secure vaccines. The first doses are due to arrive on February 1 after widespread criticism of the government’s failure to sign bilateral agreements with drug makers in 2020.

It is actually only $6 billion. The other $6 bn will line some pockets.

African leaders cant be asked to lead their countries.

Africa will remain backward until they get real leaders. Unfortunately I don’t see that happening in a hurry.

“The Chair” is a typical example of a failed self-made billionaire African leader “leading” his country and “his people” into abject poverty.

The problem is he does not care and nor does “his people” They will keep voting for more of the same.

The World Bank is to be commended for their vaccine donation, i only hope they have non -African authorities administering the program otherwise the bulk of the cash will be stolen as usual by government cronies