As the company seeks ‘high-yielding’ returns from its businesses.
By Paul Burkhardt, Bloomberg  25 Jun 2020  08:48 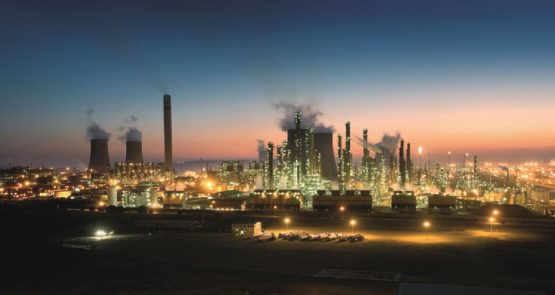 Sasol has accelerated an asset disposal programme that could eliminate more than half of the company’s debt.

The South African company is trying to raise cash amid cost overruns and lower oil prices. The process could be done in a year and take in as much as $5 billion (R87 billion) which would help prevent a last-resort rights offering.

There is plenty to sell, chief financial officer Paul Victor said in an interview.“The best possible value and the highest possible chance of a divestment, they go first,” Victor said. While each asset has its own timeline for disposal, the company intends to complete all sales by June 2021. A decision on the rights offer is due in the next few months.

Sasol said last week that it will focus on core chemical and synthetic-fuel divisions and discussions over job cuts have started. After a review of global assets, partnering is an option in some cases, while closing a unit may also be necessary, according to Victor. Sasol wants “high-yielding” returns from its businesses, he added.

Here are some of the guidelines around the ongoing sales:

Sasol’s “highest priority” in the process is a stake in the Lake Charles Chemicals Project in Louisiana, which has increased in cost to almost $13 billion and has received multiple bids. The company aims to have that sale at a well-developed stage by the end of December, Victor said. Specialist chemical production is considered part of the core business, while base chemicals take a lot of volume to stay competitive and the preference would be to sell a portion of that.

The Johannesburg-based company converts coal and gas into synthetic fuels and produces chemicals used in packaging, footwear and cosmetics. The operations in South Africa are at the heart of the company’s business and are not on the block. In order to reduce its carbon footprint, renewable energy may be purchased to help power the plants.

Sasol is still evaluating whether to sell its share of the Natref crude-oil refinery of which it owns 64%, with Total SA holding the remainder. Keeping the plant could require investing in upgrades to produce cleaner fuel. The company’s West African oil assets will be sold. Natural gas operations in Mozambique will be retained.

“Mozambique is part of our future — it helps us to decarbonise our footprint,” Victor said. Sasol’s shale gas assets in Canada were on the block earlier than anything else and a buyer could take them “at value,” he said.

I might be a simple man who does not know much, but I keep wondering if Sasol is slowly moving the company out of South Africa.

Well simple man, you are telling the truth. I’ve heard rumors about that, but for I didn’t think their exiting process would be this slow

sadly…..when I looked at the article’s photo that was my first thought as well. Once a giant in Africa but then again, that is what Africa does to prosperous companies.

Yes, the unfortunate demise of a truly pioneering company. It was such a source of pride that the old R50 note had a picture of it, but now all our notes have a political figure on them. Has there even been a better metaphor for South Africa?

IF they’re not they should.
You cannot run a company in this country any more with all the restrictive policies of this idiotic excuse of a government.
Anyone that has the opportunity to offshore their assets should do so to protect against the disaster looming

Yep, who want to operate in this crime sick environment.

You are a sick can of tin fish with no value. SA is one of the most vibrant and dynamic places in the world. Why don’t you leave! We really don’t need a negative cake like you.

Apeman get back into your cage

…. or invest in rand hedged stocks.

@dadape monkey baboon get back into your cage!

dad ape, what do smoke?

Judging from the above comments, the fall from grace of Sasol is due to South Africa’s economic/political climate. The refrain seems to be “Sasol was a great company until recently”. Actually it has never been a great company for investors. Fantastic for management and employees.
Sasol’s problems are largely self inflicted. Namely, investments where the returns are below the cost of capital. Lake Charles f..k up not the first time on a large capital project for Sasol. Will selling assets and splitting the company solve these problems? Probably not.

Maybe more bluntly they have been ripped off by Fluor. Name ring a bell? The company that designed and built Lake Charles. Was supposed to be a fixed price contract if I recall the 2013 notifications.

Here is the irony.

The Sasol CEO who pushed the project (Suggested by Fluor) through spent his whole career all 29 years of it with Fluor before he was “Placed” at Sasol as CEO.

Daylight robbery and nobody does anything about it. Better word might be corporate capture.