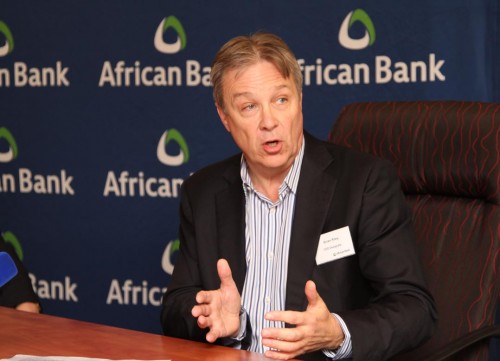 JOHANNESBURG – With a nod from the minister of finance and its brand new banking licence in hand, African Bank Limited will launch on Monday, some 20 months since the South African Reserve Bank (Sarb) placed the bank under curatorship on August 10 2014.

It’s been business as usual at the “Good Bank” for some time already, but the restructure, in terms of certain conditions that needed to be filled under curatorship, was officially completed on Friday, setting the bank up for its long mooted April 4 take-off.

African Bank is launching under the leadership of former WesBank chief, Brian Riley, and will have its work cut out for it, particularly since it lends largely to low- and middle-income customers, many of who are under cash flow pressure and spend large portions of their income servicing debt.

The bank – which has 1.5 million loan customers who fall into monthly salary bands of between R3 000 and R40 000 – will launch with an equity base of R10 billion and a healthy cash position of some R24 billion.

Among the new products it will launch this year are a funeral insurance product and an event-based stokvel product.

But its main play will be a transactional banking platform launched in the second quarter of 2017, targeting existing loan customers, unbanked individuals and competitors’ clients.

That African Bank’s retail banking platform will have zero legacy presents it with a compelling opportunity to innovate around design and customer interface, adopting ideas from ‘fintech’ players and getting one up on its competitors.

Earlier this month, the bank announced a partnership with Sanlam, whereby the insurer’s agents will sell insurance and investment products to African Bank customers. The concept will be tested in 13 Gauteng-based branches in the coming months, before potentially being rolled out on a wider basis.

African Bank will continue to offer credit life to customers through a cell captive insurance arrangement with Guardrisk, which came into effect in January.

Launches with ‘junk’ rating from S&P

Creditors of the bank, including senior and subordinated debt holders, have elected to exchange their claims on the old bank for new debt instruments in the Good Bank, which will list and trade on three exchanges (the Johannesburg Securities Exchange, the London Stock Exchange and the Swiss Exchange) come Monday.

African Bank launches with a global scale rating four notches below investment grade from Standard & Poor’s (B+/B). The ratings agency in February gave it a negative outlook, to reflect the “negative economic risk trend on the South African banking system”.

African Bank Limited – which is effectively the old bank, previously described as the ‘bad bank’ – will be renamed Residual Debt Services Limited and will continue to collect on the residual debt book under the control of the curator, Tom Winterboer.

The good bank, renamed African Bank Limited, launches Monday without the residual debt book, worth a net R4.8 billion after provisions, on its balance sheet. In a statement issued on Friday, Winterboer said, “With the resolution of the Bank set for 4 April 2016, this is likely to be the last SENS announcement made by what is currently African Bank. The Curator would like to take this opportunity to thank all of those involved in the African Bank Restructuring.”

African Bank’s former parent, African Bank Investments Limited (Abil), remains under business rescue and its shareholders will have to wait for that process to come to an end before receiving clarity on the standing and value of their equity going forward.

While African Bank will have debt listed on the JSE, as of Monday it will effectively trade as a private company.

It is not any longer about the liquidity of this bank that one should concern themselves with but whether the people in the boardroom and those in its management are still the same people who messed up and ran this company into the ground last time. Who has provided this new life;inland the sudden pile of cash they seem to have at their disposal. What about those who lost money when they had an African Bank haircut at its last liquidation? How are they going to get compensated?