Enticed to invest in the company 20 years ago, the minority shareholders continue to be ‘held hostage’ by the state. Image: Moneyweb

Airports Company of SA (Acsa) and the minister of transport head to court next month to overturn a 2017 Gauteng High Court order requiring them to buy out minority Acsa shareholders at fair market value.

Minority shareholders were enticed to invest in state-owned Acsa two decades ago, on the promise of an easy exit when the company was to list on the JSE. The listing never happened, leaving minority shareholders hostages of the state. Their only hope of exit was to sell back to Acsa.

They have been trying to do that for years, but could not agree on what was a fair price.

King Shaka airport still hangs like a noose around Acsa’s neck, costing a good part of the nearly R3 billion in loan and interest repaid over the last financial year. The R10 billion construction bill was two to three times the originally projected cost. Acsa has reduced its gearing ratio to 18% from 63% in 2010, and in its latest annual report says it will henceforth adopt a more conservative approach when it comes to infrastructure investments.

To get more traffic through the airports, the Department of Transport dropped airport fees, which reduced a vital source of Acsa revenue. 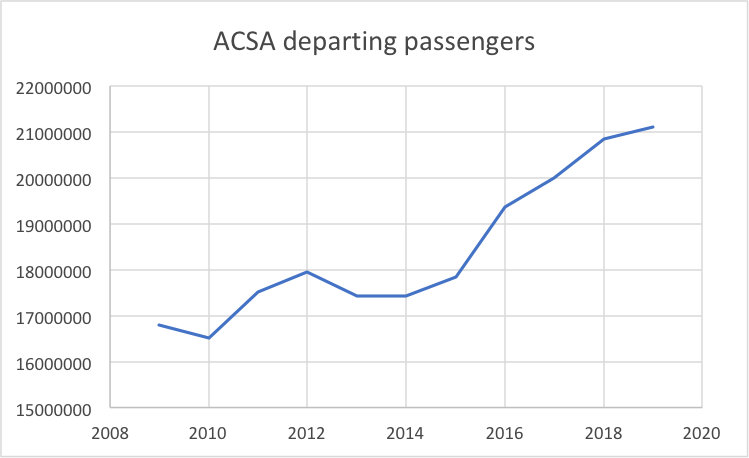 All this amounted to what is defined as “oppressive conduct” in the Companies Act, say the minorities in their court papers. The effect of lower airport tariffs on Acsa revenue is shown in the graph below. These issues will be ventilated in court next month. The 2017 high court order was the result of an agreement by Acsa and the minister of transport to purchase the shares of minorities, represented by African Harvest, subject to a valuation to be determined by an independent valuer which was to be agreed by both sides.

Both sides agreed to appoint RisCura to do the valuation, but when it came up with a valuation of R78 a share, Acsa had a change of heart.

It was a case of “indirect buyer’s remorse” according to Alun Frost of African Harvest, representing the minorities, in his court papers. Acsa then appointed a different valuer, Professor Harvey Wainer of Wits University’s School of Accountancy, who came up with a valuation of roughly half this amount, or R36.36 a share, which is less than Acsa’s disclosed net asset value in its 2017 financial statements.

That being the case, minorities believe Acsa has misstated its financial results and should impair its assets by about R1 billion.

Wainer’s figure values Acsa at R18.1 billion, while RisCura’s put it at nearly R40 billion. The difference is that RisCura’s valuation compensates for “oppressive conduct” – such as the politically-inspired investments in King Shaka and the reduction in airport tariffs.

What the stake may cost

African Harvest represents shareholders with just 1.8% of Acsa’s shares, but this valuation meant Acsa would have to pay R700 million, a figure that has now escalated to around R850 million. If all 4.2% owned by minorities is included, the figure Acsa must pay rises to R1.6 billion.

What caused Acsa, having agreed to abide by RisCura’s independent valuation in 2017, to change its mind?

Frost, as advisor to African Harvest and other minorities (now formed under the umbrella of Oppressed Acsa Minority 1), argues that the attempts by government and Acsa to overturn a court order previously agreed to by both sides smacks of “bad faith and opportunism”.

“When you have to pay out R1.6 billion to purchase the shares of minorities, why not gamble R50 million on legal fees to see if you can improve your odds of winning,” said Frost when contacted by Moneyweb.

One of the grounds for rescission being claimed by the government is that it was not party to the settlement agreement between Acsa and minorities, and that Acsa had entered into the agreement without board authority. It also argued that the minister of finance should be joined to the proceedings, as the settlement impacted state finances.

This is misleading, says Frost. The Public Finance Management Act (PFMA) is not triggered by the proposed share buy-back scheme agreed between the parties, as the Act only applies to transactions involving “significant” shareholdings. Hence no notice to National Treasury is required, and the finance minister therefore has no legal interest in the case. Nor does it seem the minister of finance has much interest in joining the case.

“I submit that it speaks volumes that the minister of finance has not entered the fray, despite being served with the application papers when the government launched this application,” says Frost’s affidavit.

Frost then says it is disingenuous to suggest government was not party to the settlement agreement. It not only knew of it, but consented to it and was instrumental in bringing it about. The government argues in its papers that the agreement is unlawful in terms of the PFMA, as it binds Acsa to a future financial commitment without the required board approval. The minorities reply that this is not a future financial commitment, since the agreement required immediate payment in full for their shares.

The government further argues that the share buy-back agreement will have a devastating impact on Acsa’s financial reserves, which in turn affects the national fiscus and public interest.

These claims are vague and incorrect, argues Frost. Acsa has been self-funding for many years, and there is no question of public funds being at risk.

Acsa is 74.6% owned by the state, 20% by the Public Investment Corporation (PIC) and the balance by minorities, which includes African Harvest and Up-Front Investments 65.

This is a warning of what the likely outcome will be with prescribed assets or if any of the other SOEs take on public equity. The minority shareholders get captured by the rogue major shareholder and are left with stranded assets with no market value- kinda like an African Harvest.