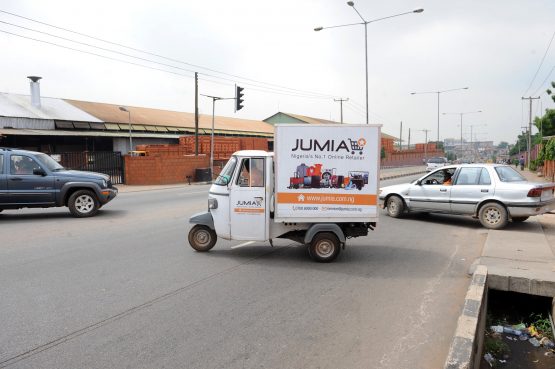 Investors are turning sour towards Jumia Technologies' stock as it battles to keep up with deliveries, payments, cancellations and returns of goods in Nigeria. Image: Pius Utomi Ekpei, AFP/Getty Images

The company dubbed ‘Africa’s Amazon’ employs about 700 people in Nigeria to deliver goods including laptops, jewelry and high-heeled shoes to customers in offices, factories, and even bus stops around towns including the country’s sprawling commercial capital. The process can be a chaotic affair, and much can go wrong.

“I am happy when I don’t have any point-of-sale issue or problems on my phone, because sometimes the network is poor,” Umoru Yusuf, a Jumia driver, said as he clutched the wheel of his branded gray van. “Sometimes, about 10 customers can call to say they are no longer interested in purchasing an item, so they cancel their orders.”

It’s easy to see why Jumia’s investors have a concern over the company’s high level of failed deliveries across its 14 countries — some 40%, including cancellations and returns — and question the viability of ordering goods online and having them delivered in major African cities. The skepticism is evident in the share price, down about 25% since its high-profile initial public offering in New York in April.

During a four-hour journey with the 39-year-old Yusuf between 10 am and 2 pm on September 9, packages were delivered to eight customers, including workers at the local operations of drinks giant Coca-Cola Co. and chocolate maker Cadbury Nigeria. Locating recipients was one problem — involving an average 15-minute wait and multiple phone calls — and that was before the mobile-payment system stopped working.

When that happened, Yusuf had to drive a customer to an ATM to withdraw about 140 000 naira ($386) in cash. That increases the safety risk, as drivers have to count large wads of notes in public spaces. Sometimes, he just gives up and goes back to HQ.

Jumia’s main solution to the issue is the development of Jumia Pay, a more reliable mobile-payment platform that can be used to transfer funds up front. “Up to 75% of our business in Africa is pay on delivery and 25% is pre-paid,” Tolulope George-Yanwah, services country manager for Nigeria, said in an interview. The latter number should “improve month-on-month due to Jumia Pay — a lot of people are adopting it,” she said.

Founded by former McKinsey & Co. consultants Sacha Poignonnec and Jeremy Hodora in 2012, Jumia has grown a customer base to more than 4.8 million people across 14 African countries. The company’s widening losses to 66.7 million euros in the second quarter have contributed to the share-price weakness, as has a damning analyst report by short seller specialist Citron, which highlighted the cancellation levels among other warning signs.

Citron took “some of the risk factors that we have volunteered in our prospectus and just tried to paint a negative picture,” Chief Executive Officer Poignonnec said in an interview. “The best thing we can do is to continue to execute our strategy and show that we are a very good company and we deliver very good results.”

Another issue for the CEO to address is corruption. Jumia said last month it identified improper transactions involving a team of Nigerian sales consultants called J-Force that amounted to as much as 4% of first-quarter sales.

“If there is a fraud case, it’s our job to identify it, solve it, and create a remediation plan so that it does not happen again,” the CEO said.

For driver Yusuf, the main priority is to successfully deliver the items to recipients, as that is the measure that decides his pay. Customers who don’t meet him or change their mind about their purchase directly impact his salary.