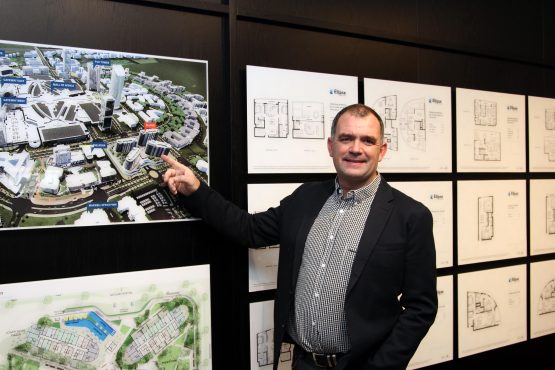 The new development represents Attacq’s first high-rise residential property project at Waterfall City. It is located adjacent to the Mall of Africa and will include a new Courtyard Hotel and office blocks.

Speaking to Moneyweb at a sod-turning ceremony at the site on Wednesday, Attacq CEO Melt Hamman said the Ellipse apartment project is anticipated to boost Waterfall City as a “live, work, play” environment.

He says that despite the country’s prevailing economic conditions and pressured property sector being under pressure, the development has sold over 80% since November.

“When Phase 1 of Ellipse is complete in mid-2021 it will include two towers with 272 apartments. This will densify Waterfall City and bring in the first permanent residents to the core CBD. It will also have spill-over benefits for the retailers and restaurants at Mall of Africa and businesses in the node,” Hamman adds.

The overall Ellipse development is anticipated to have almost 600 apartments. “The volume of sales achieved in such a difficult economic environment shows that people are buying into the lifestyle offered by Waterfall City as a precinct,” he adds.

Kloeck says when fully complete, the Ellipse development will have a club house; restaurant and coffee shop; as well as a spa and gym as part of its onsite offering to residents. “We have sold apartments ranging from R1.5 million to penthouse at R20 million.

“Some 60% of purchasers are buy-to-let investors, with sports and entertainment personalities like Kagiso Rabada and Oskido having bought apartments.” Attacq’s chief development officer Giles Pendleton says the group anticipates even greater demand for the next phase of Ellipse as well as future multi-storey residential developments at Waterfall City.

“We already have about 3000 people working in the landmark PwC office tower next to the mall. With PSG Wealth recently moving into a new building at Waterfall City and another 3 000 to 4 000 professionals coming in with the opening of Deloitte’s new head office building next year, many of these people will consider staying close by,” he notes.

He says in the greater Waterfall node there are also more than 4 500 luxury homes. However, Attacq is only involved in high-rise residential developments in the core Waterfall City CBD. This is in addition to its key master-developer role of the precinct, which includes office, commercial and light industrial property development.

Meanwhile, Hamman says more residential and office towers are planned for Waterfall City in the future. “The office market is tough, while on the residential side our current focus will be on delivering the Ellipse development. We are looking at further residential developments around the mall. Construction is also proceeding well on The Atria mixed-use hotel and office development next to the Ellipse site, where JSE-listed City Lodge Hotel Group will operate the four-star Courtyard Hotel.”

“Some 60% of purchasers are buy-to-let investors, with sports and entertainment personalities like Kagiso Rabada and Oskido having bought apartments.”

Oooh, I must not miss out then…I wonder how the new inclusionary housing policy is being implemented.

Wouldn’t touch it if you paid me with a gun to my head, thanks, goodbye.