This week was one for the record books for big tech, in ways both good and historically bad.

Results from a trio of Wall Street’s most widely followed names spurred huge weekly moves, with hundreds of billions of dollars getting created or evaporated. For Alphabet and Amazon.com , strong reports underlined their growth prospects, spurring rallies that led to their biggest one-week percentage gains in months. For Meta Platforms, the Facebook parent that had the single-worst day in Wall Street history by one metric, it was a different story.

Alphabet rose 7.5% for the week, its best such performance since October. Earlier this week, it reported results that beat expectations, help by a robust performance in its advertising business. The week’s advance added $122.5 billion to its market valuation, bringing it close to the $2 trillion threshold. It rose 0.1% on Friday.

Amazon rose 9.5% for the week, its biggest one-week gain since July 2020. The bulk of the week’s advance came on Friday, when shares surged nearly 14% on the back of a report that also sailed past expectations. Friday’s move was the biggest percentage gain for the stock since April 2015, and the nearly $191 billion it added in market value was a record one-day value gain for the US market.

On the other end of the scale, Meta fell 21% over the week, its biggest one-week drop on record. The collapse came after it gave a weak revenue forecast amid stagnating user growth and increasing competition from TikTok. Shares suffered their biggest drop ever on Thursday, resulting in the biggest one-day wipeout of market value for any US company in history. The stock fell 0.3% on Friday. 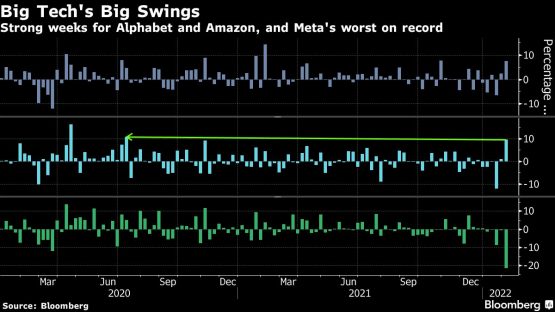 Overall, the tech-heavy Nasdaq 100 Index rose 1.7% for the week, its second straight weekly gain. Last week it was supported by strong reports from other mega-cap stocks, including Apple and Microsoft.