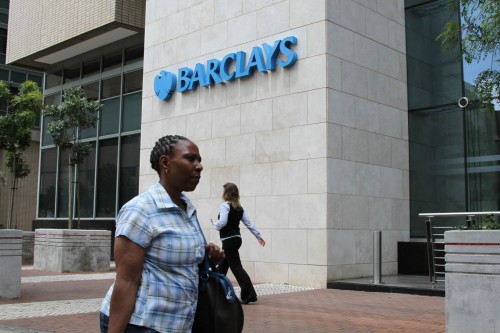 Bob Diamond confirmed months of speculation: after a four-year enforced break, he wants back into his old African business — with financial firepower courtesy of Carlyle Group.

The American-born financier said on a conference call Tuesday that he and investors including US private-equity giant Carlyle are working together on a potential bid for Barclays Plc’s controlling stake in its African business. Diamond ran Barclays before his 2012 ouster during the Libor scandal.

“The consortium has committed long-term strategic investors,” Diamond said on the call. “The funding is in place. There is support for this potential transaction.”

Atlas Mara, the venture Diamond and Ugandan entrepreneur Ashish Thakkar formed to buy African banks, said earlier Tuesday that the two men’s firms were in talks to potentially mount a bid for Barclays Africa and combine it with Atlas Mara. A combination with Barclays Africa Group would rapidly accelerate Atlas Mara’s growth and give Diamond, 64, control of operations he championed as the chief executive officer of the British lender.

As for Barclays, it’s betting on investment banking and its consumer and cards units under new CEO Jes Staley, while selling down its 62% stake in the African unit to boost capital. Officials at Barclays in London and Johannesburg declined to comment.

Staley said in a Bloomberg Television interview last month that Diamond would lack the “financial capability” to buy the whole of Barclays Africa. That company’s market value is more than $8 billion, while Atlas Mara’s is just 307 million pounds ($449 million).

Diamond still faces doubt over whether a deal is possible. Ilan Stermer, a Johannesburg-based banking analyst at Renaissance Capital, said an acquisition would face “significant” regulatory hurdles, and Atlas Mara may not be interested in the South African piece of the Barclays business, which provides most of the earnings.

Started in 2013, Atlas Mara has made acquisitions to gain access to seven sub-Saharan countries from Botswana to Nigeria, with plans to expand that to 10 to 15 markets. Atlas Mara is led by a former top Barclays executive for Africa under Diamond, ex-Marine John Vitalo.

The stock price halved in the two years after its initial public offering. Analysts criticized Atlas Mara for overpaying for deals and not buying back shares as they fell in value.

“I don’t see any attempt to do something to show the market that you really believe what you’re saying,” US hedge-fund manager Leon Cooperman told Diamond and his team in August. The company started a $10 million stock-repurchase program two months later and said Tuesday it’s about half way through that effort.

Staley is putting one of Barclays’s more profitable businesses on the block at a time of low commodity prices and political turmoil in South Africa. He’s preparing to sell an initial 10% stake in the Johannesburg-based business to several large investors, while keeping the option to divest its entire holding, people familiar with the matter have said.

“There will be some people who would be slightly nervous about selling a business to somebody who was an insider before,” Piers Hillier, who helps oversee about $123 billion, including Barclays shares, as chief investment officer of Royal London Asset Management, said in an interview with Anna Edwards on Bloomberg TV. “We’d want to see not just one candidate, who’s effectively a former insider, as the only available candidate to purchase. It doesn’t tend to mean you’re going to be able to secure the best price.”

Atlas Mara said its board of directors “supports the exploration of the potential combination” of the company with Barclays’s African operations, while Diamond and Thakkar will “recuse themselves” from the firm’s internal discussions over the potential approach.

Atlas Mara stock gained 4.3% at the close in London trading. It has still fallen about 16% this year amid a reversal of the commodities boom that made Africa the last great growth frontier.

“Strategically, the building blocks are falling into place and I fully expect that 2016 will demonstrate further progress on our journey towards building sub-Saharan Africa’s premier financial institution,” Chairman Arnold Ekpe said in the statement.