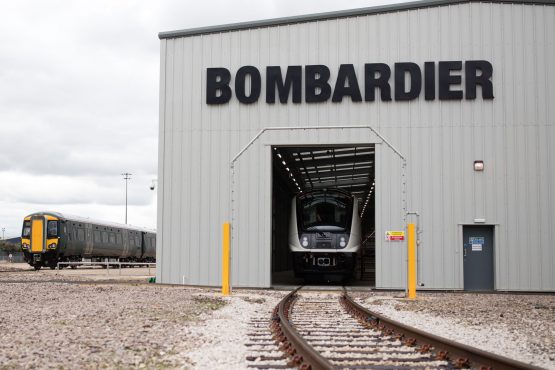 Bombardier, the embattled Canadian train and plane maker, is exploring a combination of its rail business with French rival Alstom SA, according to people familiar with the matter.

The two companies have held preliminary talks about a rail deal in the past few months, said the people, who asked not to be identified because the discussions are private. Representatives for Alstom and Bombardier declined to comment.

Alstom rose as much as 2.1% in early trading in Paris Wednesday. Bombardier ended 5.7% higher in Toronto Tuesday, giving the company a value of C$3.18 billion ($2.43 billion).

The latest considerations between Bombardier and Alstom could face antitrust scrutiny, and there’s no certainty they will lead to a transaction, the people said. A rail deal is among several options the Canadian company is exploring to stabilize its portfolio, which also includes business jets, they said.

The deliberations started before Bombardier shocked the market last week by warning of disappointing fourth-quarter sales, according to the people. Bombardier also said at the time that it may exit a joint venture with Airbus SE that makes the A220 jetliner and potentially take a major writedown. Bombardier shares dropped as much as 39% on the news, a record decline.

A takeover of Bombardier’s rail business by Alstom would mark the latest attempt by some of the world’s biggest trainmakers to counter growing competition from China. Bombardier in 2017 held talks to combine its rail operations with competitor Siemens AG until the German company suddenly opted to pursue a deal with Alstom.

The European Union then in February 2019 blocked the Franco-German merger, which would have created a European rail champion, after regulators refused to cave in to warnings about the looming threat of Chinese competition. Alstom is unlikely to pursue a merger with Bombardier due to antitrust considerations, according to Bloomberg Intelligence.

“Revenue is similar and a merger would create a significant concentration of sales in the European rolling-stock sector, akin to the recently rejected Alstom-Siemens Mobility deal.”

While historically best known as a manufacturer of metro, commuter and regional trains, Bombardier has collaborated in high-speed projects including Alstom’s high-speed TGV. The Canadian company generated sales of $8.9 billion from the rail transport business in 2018 while Alstom’s reached 8.1 billion euros ($9 billion) in its latest fiscal year.

The potential end of Bombardier’s involvement in A220 manufacturing, combined with new stumbles in the company’s rail business, have undermined a once-great name in manufacturing just when investors thought they were poised to reap the rewards of a difficult turnaround effort. Walking away from the A220 would close the book on Bombardier’s work on an aircraft program in which the company invested more than $6 billion.

The negative earnings announcement could hamper efforts to reach a deal with Alstom, weighing on the estimated value of the Canadian company’s rail operations or spurring both firms to focus on their own separate businesses, the people said.

Bombardier in 2015 sold a 30% stake in its Berlin-based train business to pension fund Caisse de Depot et Placement du Quebec, valuing the unit at $5 billion at the time and helping the firm raise capital as it faced a cash drain from delays for its new jets. Before that, it had considered an IPO of the rail unit.

Were Bombardier to exit both rail and the A220 project, control of which it ceded to Airbus in 2018, its operations would be confined to manufacturing corporate aircraft under the Learjet, Challenger and Global brands.

The company sold its turboprop business to Longview Aviation Capital Corp. for $300 million in a deal completed last year, while Mitsubishi Heavy Industries Ltd. agreed to buy the CRJ regional jet arm for $550 million in June.