Buy Tesla as the electric-vehicle maker ‘checks all the boxes,’ Credit Suisse says The electric-vehicle giant’s rout over the past few weeks has left the stock looking “attractive,” the bank said, while raising its recommendation to the equivalent of a buy. Tesla’s valuation has tumbled to the lowest since March 2020 — with its current price hovering below Wall Street analysts’ average target for the stock, according to data compiled by Bloomberg. 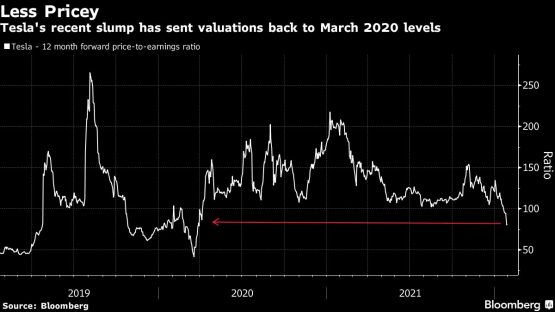 “We are hard pressed to find a stock that checks all the boxes as Tesla does,” with a good growth story and themes including disruption and decarbonisation, analysts led by Dan Levy wrote in a Monday note to clients. This year’s growth-stock selloff — which prompted a 20% slump for Tesla — has created an opportune entry point to buy, they said.

The declines in January also pushed Tesla stock closer to the so-called oversold territory — a technical level that signals a potential reversal. When the shares approached those similar levels in May, they doubled over the following four months.

“While we’ve largely concurred with the favourable fundamental outlook for Tesla over the past two years, our challenge with the stock, and what held us on the sidelines, was valuation,” the analysts wrote. They reiterated a price target of $1,025, suggesting about 9% upside from Monday’s close.

The average analysts’ target on Tesla is now $949, reflecting the potential for a 1.3% gain in the share price from the last close. The last time it traded below the average projection was in June.