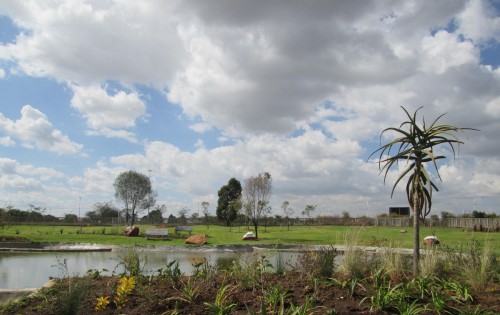 JSE-listed residential property developer Calgro M3 will next month launch a new subsidiary that will provide permanent homes to the departed.

With its first private memorial park (a commercially operated graveyard) opening at Nasrec near Soweto next month, Calgro M3 Memorial Parks hopes to transform the burial business countrywide and contribute significantly to group revenue and profitability.

The group has already invested R75 million in the Nasrec site. This went toward construction of the company’s head quarters at Nasrec, the memorial park alongside it, top security systems and infrastructure to ensure the company will operate completely off the grid.

Financial director Wikus Lategan says the whole idea started a few years back as a solution to use land in the green belts in Calgo M3’s integrated property developments more efficiently. Since 2010 the company has embarked on serious research into the concept and had KPMG prepare a comprehensive report.

Personally he has learnt a lot about angels, different kinds of crosses and cultural perceptions about death in the process, Lategan says.

The company realised that municipalities are increasingly struggling to deliver a quality service with regard to burial space. In fact, space as such is becoming a real issue. Public graveyards are often dangerous places from a crime perspective and are not well maintained.

Calgro M3 want to “bring dignity back” to graveyards, he says. The memorial park will be well designed as a haven of tranquility and serenity. It should be a place where families can go to commemorate their loved ones without concerns for their safety. As such there will be access control, CCTV cameras and 24-hour roaming guards.

The Nasrec Memorial Park will feature indigenous trees in landscaped gardens, with two man-made dams linked by a stream. An island will be created in one of the dams to attract bird life, says Lategan.

Private funeral companies will be allowed to bury in the memorial park. A main chapel with 200 seats and possible extensions and three smaller chapels will be constructed on the premises. This will do away with the numerous tents that create the impression of commercialisation in public graveyards, Lategan says.

Much thought has gone into the design of the memorial park to prevent the monotonous row upon row of tombstones. In some sections the tombstones will be diagonally assembled and in others only flat tombstones will be allowed. Generally speaking, families will be encouraged to erect only headstones, instead of full tombstones.

A wall of remembrance is also being erected.

The 20 hectare Nasrec Memorial Park will accommodate 39 000 graves, sold at between R10 000 and R25 000 each, depending on the amount of maintenance needed in the relevant area (a view of the water may be more costly). Each grave is deep enough to accommodate three coffins.

Part of the revenue will go into a maintenance fund that will be independently managed and invested to beat inflation and pay for maintenance in perpetuity. Family that come to visit a loved one’s grave 20 years later should still find the same level of dignity in the surroundings, Lategan says.

The real challenge in developing the product was to make it accessible for all consumers. The solution is that apart from cash purchases, clients will also be allowed to book their spaces in advance and to finance it or pay a booking fee by adding a prescribed amount to their funeral cover.

In this regard Calgro M3 hopes to announce finance and insurance partnerships next month.

The insurance option has the potential of creating an annuity income for the company that may buffer its otherwise cyclical income, says Lategan. Being off the grid, the new subsidiary also will further reduce the group’s exposure to the country’s electricity shortage.

He says the regulatory framework for graveyards is quite strict. One has to obtain the appropriate land rights and comply with several by-laws during operations. The company has a good working relationship with the City of Joburg due to its property development operations and this has served it well in ensuring compliance, Lategan says.

As Calgro M3 is in a closed period, he could not comment further on prospects.