The regulator’s conduct is ‘unlawful’ and has damaged his reputation, says Sipho Pityana.
By Felix Njini, Bloomberg  26 Oct 2021  11:35 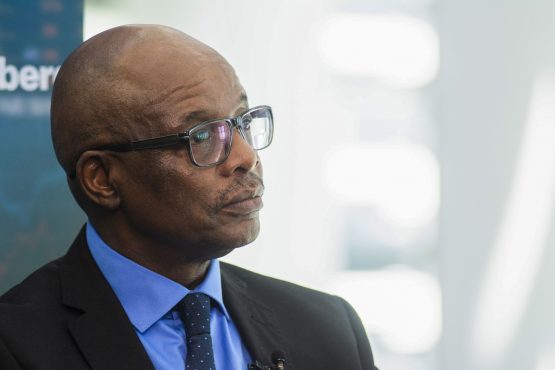 Sipho Pityana, president of BUSA, pauses during a Bloomberg Television interview on the opening day of the 28th WEF on Africa in Cape Town, South Africa, on Wednesday, September 4, 2019. Image: Bloomberg

Sipho Pityana, lead director at Absa Group, is suing part of South Africa’s central bank for stymieing his appointment as the chairman of the country’s third-largest lender.

Pityana (who is also current chairman of Redefine Properties) is claiming reputation damages from the Prudential Authority after what he says was a flawed background check, according to an application filed in Gauteng High Court on Monday.

The lawsuit cites Absa but is not seeking compensation from the bank nor trying to overturn Moloko’s appointment, the documents say.

Pityana, who stepped down as chairman of miner AngloGold Ashanti in December, says the regulator “adopted an informal process” when reviewing his record and rejected him without a right of reply. The appointment would have been approved were it not for sexual harassment complaints against him at AngloGold in 2020 which he disputes, he said in an affidavit.

The regulator’s conduct is “unlawful” and has damaged his reputation, Pityana said.

The bank instead on Tuesday appointed Moloko, who stepped down from Pretoria-based insurance group Momentum the previous day. He will replace Wendy Lucas-Bull, who is due to retire in March.

Absa is still without a permanent chief executive officer following the departure of Daniel Mminele in April after a dispute with the board.

The central bank said it acted according to its mandate and will challenge the allegations in court. The Prudential Authority “has the right and responsibility to object to an appointment based on competence or integrity,” it said in an emailed response.

Absa confirmed the bank has been cited in the proceedings without relief being sought against it. The lender “has conducted a robust chairman succession process, which started in October 2020,” the company said in an emailed response to questions. “During this process which involved an extensive search, Absa considered both internal and external candidates.”

AngloGold said it initiated an independent investigation into the sexual harassment claims against Pityana, led by a senior advocate. “The investigation was independent, fair and thorough , and we are confident in its conclusions,” the miner said.

The lawsuit was first reported by Business Day.

Ja no well fine — Having to sue someone to gety a job ne !!
Only in SA

This is a great example of the “Streisand Effect”. The lawsuit has amplified his alleged misdeeds. Now we all know!

It is more like the African Socialism effect that expects property owners to behave like saints while all the criminals have cushy positions in parliament or in government. This system incentivizes corruption and rewards perpetrators with leadership positions. Private sector banks are overregulated while the SOE, Land Bank, is bankrupt due to mismanagement.

The push for the nationalization of the SARB is another step in this direction.

I was thinking Kruger-Dunning but Streisand too!

More like the Africa syndrome.When everything else fails you play victim card.

Legal disputes – major growth industry in SA. I should have become a lawyer. Your coffee’s lukewarm? SUE!

In order to keep their cushy jobs the sleazy in SA resort to litigation. It’s like trying to rid yourself of herpes – no matter how hard you try, it keeps coming back. The cadres are the gift that keeps on taking.

Are the conclusions of the Anglogold investigation secret? Who is paying the legal fees?

We can smell the false sense of entitlement.

Ag shame, better get a job in government where the lowest of the low life are welcomed.

It seems everyone in this comment section is just looking at the man’s race and ignoring the facts. He’s not claiming he wants the job, he’s saying he was disqualified based on an unproven sexual harrassment allegation which is defamatory to his character. I hope any man in this comment section never gets falsely accused of any sexual crime without due process or maybe the guys reading MW are #Metoo feminists.

Then why is he not suing Anglo, or the person that bought the charge against him, surely that is the right place to start!

Seems to me like there is more than meets the eye here!

He’ll get accused of “retraumatising” the alleged victim if he takes legal action against her. No man stands a chance in the “court of public opinion” dominated radical feminist activists.

They probably asked why you resigned from Ashanti’s chairman role.

I don’t know but Karma? Must be karma.

I am referring to Msholozi.