After its blowout success forced them to launch copycat products, Capitec has now further simplified its pricing which will place more pressure on its Big Four full-service rivals. The fee structure has been flattened to effectively five prices. The majority of in-branch transactions are now R5, from a mix of anything from R4 to R4.75 in 2016. There is little consistency in pricing at Absa, FNB, Nedbank or Standard Bank, with each having easily a dozen different prices, depending on the transaction.

In announcing the change in February, Capitec argued the set fee for branch transactions “aims at simplifying cost structures for all customers”. A more cynical take on this is that transactions that rely on the bank’s physical branch footprint are now as much as 25% more expensive. 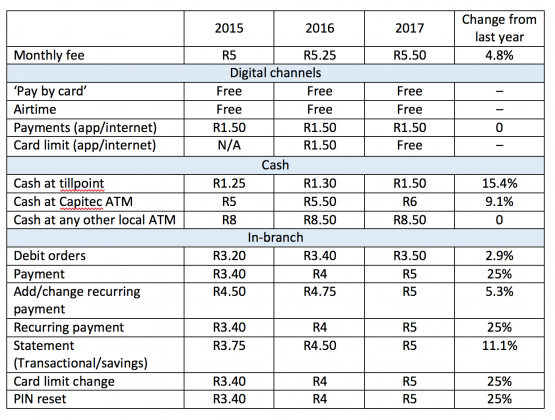 This is no surprise, with costs related to the bank’s branch and ATM network soaring in the year. In its chief financial officer’s report, the bank discloses that employment costs grew 21% year-over-year to R2.409 billion, with a net increase in staff of 14% (to a total of 13 069). Costs related specifically to its branches (‘Premises expenditure’) were up 18% in 2017, to R498 million on the back of an 11% increase in the number of branches to 796. Capital expenditure for the year was R1 billion, a 42% increase from 2016. The bulk of this increase was due to accelerated spend on IT as well as branch and ATM infrastructure. More than half of its branch network are so-called ‘new-look’ outlets (434). Self-service transactions grew strongly, by 46% year-on-year, to R728 million. ATM and branch transactions for the year were up 15% to R330 million. While this trend (a shift away from costlier channels to digital ones) is healthy, it still stands in contrast to its full-service rivals where usage of branches is on the (deliberate) decline. Although electronic banking channels (app/internet/USSD) are lower cost (and cheaper for consumers), it still saw 70% growth in income from these, given the robust transaction volume growth along with targeted price increases in March 2016.

On an overall basis, the bank is targeting to cover 100% of its operating expenditure with net transaction fee income by 2020. At the moment this ratio is 72%, a strong improvement from 59% in 2014.

The increase in its monthly account fee, from R5.25 to R5.50, means it is now firmly the most expensive no-frills/entry-level bank account, when measured on this basis. But, when taking into account fees for transactions, Capitec remains the cheapest among the five banks. That gap is narrowing, however.

In the February comparison of entry-level bank accounts (No-frills bank accounts, compared), I argued that Capitec shines when looking at the comprehensive/all-in monthly cost “because its pricing for transactions like debit orders, cash withdrawals, and electronic payments is the least punitive of all five banks”. It is also important to note that with its Global One account, interest on positive balances is earned (currently at a rate of 5.35% per annum) – the only bank to do so. With a R2 000 balance in the account, you’ll earn about R9 back in interest per month. This effectively earns the accountholder a ‘rebate’ of sorts on fees.

It’s the simplification, though, that ought to be applauded. Capitec had already offered flat-rated fees for ATM withdrawals for years. No matter how much you withdraw, you either pay R6 (for a withdrawal at a Capitec ATM), or R8.50 (at any other local ATM). Most rivals (with the exception of Absa) are seemingly addicted to a pricing model that disincentivises customers from withdrawing cash: the more you draw, the more you pay. The problem, however, is that this segment of the market relies heavily on cash.

When it comes to pricing of branch transactions, Capitec’s rivals are all over the place. This is understandable as they have legacy physical footprints, with a far higher level of costs. These are also far stickier than in the case of Capitec, who tends to use its branches as a consulting (financial education) and lending sales channel.

The shift by Capitec to effectively five prices for various (of the most popular) transactions gives hope that rivals will follow. In contrast to ‘bundled’ pricing, which is mostly a good deal for banks, but not for customers, per transaction (pay-as-you-use) pricing is wholly transparent, especially when fees are either R1.50, R3.50, R5, R6.50 or R8.50. Of course, this could be even simpler: why not a flat-rate of R2 for those digital transactions that do attract a fee and R5 (or R6) for physical ones?

The comparison is useless and not correct. How can you say capitec in_branch fees have increased by 25% but you fail to show the in_branch fees of Fnb, nedbank, standard and absa? I used 2 have a nedbank account , I closed it bcos I was charged R260 for in_branch withdrawal. I was flabbergasted by that and decided to change banks. When u do a comparison, it must be fair and on same items. Your article is just crap, u think we’ll change from capitec? Not even in your dreams.

Mrs_M that is entirely your prerogative. I must confess that from the tone of your comment I did a double take to see what you were so upset about. Please read the article properly before attacking the author… He was simply stating that fees for transactions can now be up to 25% more than before, which is simple math. The author maintains that Capitec is still the cheapest bank, so you have blown your fuse for no reason.

What I would like to see are some insights on Capitec’s financials and the health of their debtor’s book. I am rather concerned over their lending policy and would like some views on the sustainability of it, and what the effect would be should we see a significant increase in interest rates in the near future (in light of a credit downgrade).

After 30 years with Absa, closed accounts in 2005 and transferred all banking to Capitec. Costs at Absa was about R145 per month. At Capitec maintained a balanca of R5500, thus earning interest of around R25. Costs at Capitec averaged about R16. Savings for the last 12 years is thus R145 * 12 months * 12 Years which equals to R20880. Viva Capitec, Viva.

Plus their staff are friendly and always approachable.And you don’t wait long to be served unlike the ‘bunker’ mentality banks.Two things though:they need to be in more shopping centres.Also, please provide more comfortable seating whilst waiting to be served.Otherwise, a big thumbs up!