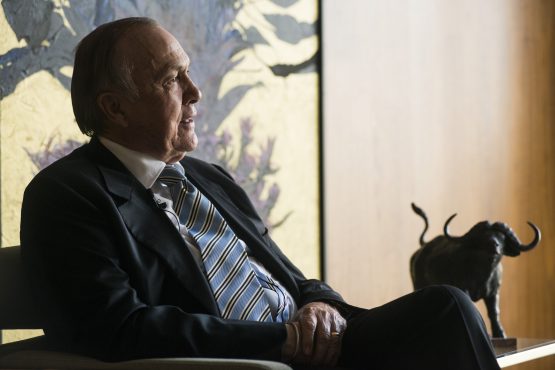 South African retail group Steinhoff, which is fighting for survival following its disclosure of accounting irregularities, said tycoon and major shareholder Christo Wiese has stepped down as chairman.

Steinhoff said in a statement on Thursday that Wiese had offered to resign to reinforce independent governance of the company and that the supervisory board had accepted his resignation “to address any possible conflict of interest that may exist”.

The company said that Heather Sonn, a member of the supervisory board and its independent sub-committee, had agreed to assume the position of acting chairperson, adding that Wiese’s son Jacob had also resigned from the board.​

Steinhoff rapidly expanded to own more than 40 retail brands around the world including Conforama, Mattress Firm and Poundland, but its share price has plummeted since it announced last week that it had found problems with its accounts and its chief executive had quit.

South African state pension fund, PIC, the second-largest investor in Steinhoff after Wiese, said on Wednesday it would ask for a seat on the board committee investigating accounting irregularities at the company.

The Public Investment Corporation (PIC), which has about 10 percent in Steinhoff, had said there was the risk of a possible conflict of interest in having Wiese serve as interim CEO after the departure of Markus Jooste, and it wanted the appointment of at least two independent non-executive directors.

Steinhoff, which moved its primary share listing from Johannesburg to Frankfurt two years ago, has been under investigation for suspected accounting irregularities in Germany since 2015. Four current and former managers are under suspicion of having overstated revenues at subsidiaries, prosecutors said.

Steinhoff has previously said that the investigation related to whether revenues were booked properly, and whether taxable profits were correctly declared.

Steinhoff and grocery retailer Shoprite called off a deal in February to create an African shopping giant, preventing Wiese, who has stakes in both companies, from bringing more of his retail assets under one roof.

Wiese was one of the early executives of clothing retailer Pepkor, which was co-founded by his parents in the 1960s in Upington on the southern edges of the Kalahari desert, but is best known for transforming grocery retailer Shoprite from just six shops in the 1970s to hundreds of stores across Africa.

Serves Christo and Jacob Wiese right to finally step down from board duties given that this happened entirely on their watch but why did it take Benguela Global Fund (thumbs up to Zwelakhe and Karl) in order for them to have an “epiphany” now ? Now if only Len Konar and other “deadwood” could be told to find the nearest exit…

Len Konar has been sidelined. he is a senior director and Sonn has taken over. Having said that I agree that he is-and always has been-dead wood.

The resignation of business tycoon Christo Wiese as chairperson and director and of his son Jacob as a director is another blow for Steinhoff International and the share price would probably reflect this sentiment on 13 December 2017.

Wiese was actually rather newly appointed to the board and could have had a very positive influence in turning the ship around. They should rather have forced out the directors who has served for four years or longer and who was part of the mismanagement of the company, and kept the representative directors of the two major stakeholders (Bruno Steinhoff and Christo Wiese).

Though Wiese’s resignation may promote independent governance for the sake of compliance, usually nobody else can make such good business decisions as the person who is most heavily invested in a company. Wiese also have the added benefit of exceptional business acumen and business experience. It’s a pity.

Time to call on Whitey Basson (ex associate of Wiese) to come out of retirement to come and sort out the mess. He is a do’er.

The contrary to “…usually nobody else can make such good business decisions as the person who is most heavily invested in a company.” is that the same said person is less likely to make rational business decisions when such decisions would mean a personal loss to himself.

All of the Stellenbosch mafia are in the same mould.

Basson is no different. He just isn’t as reckless as Jooste.

How would he actually improve things? Do you think it is because he was so “awesome” at Shoprite?

The share price will hit rock bottom. It’s only chance of survival has been eliminated with the departure of Christo Weise.

He is still acting CEO. So not all doom and gloom.
Again, the initial issue was in Europe. I personally don’t understand why everyone is reacting like this.

He will be a forced seller soon as the loan amounts are now bigger than the value of shares he put in as a collateral. Wiese is in trouble. But I guess even Zuma has his blind followers

While I don’t think all is well and good, I do understand where Lauren is coming from. In reality, we do not really have all the facts in our hands. Additionally, it seems people have misunderstood why he resigned, thinking he is resigning due to him having a negative outlook and wanting to avoid responsibility – when in fact it is the opposite. Resigning from the supervisory board so that they can more effectively fulfill their role as he acts as CEO. i.e. avoiding a conflict of interest.

So yes, until the emergence of complete, accurate financials (wishful thinking?) and a better understanding as to how bad things really are, it is rather fruitless passing judgement and predicting doomsday. Then again, I am in a rather expansive mood today, so perhaps I am being too lenient on Mr Wiese and his management team.

Now for the rest of the Board!

Who do you nominate to replace the whole board?

yes, that is a good question because people with integrity are few, especially in SA

People lose sight of the fact that pension funds lost billions. This after the losses in Fidentia, Sharemax, Pinnacle Point Group and others. The Accountants who work overtime looking for loopholes so that directors can walk away Scot-Free should pay the price. Corrupt accounting practices need to be stopped. Wishy Washy commissions of enquiry are not the answer.