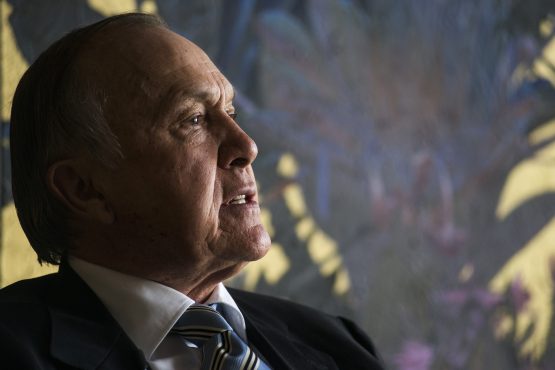 Wiese was narrowly re-elected as a director of the group in November. Image: Waldo Swiegers/Bloomberg

Former chair of Shoprite Holdings Christo Wiese has purchased 20 000 single stock futures contracts on the open market to a total value of R413.6 million. The announcement was made by the group on Friday.

Wiese, who retired as chair of the group after 40 years in 2020, remains a non-executive director and made the purchases through a company he controls, Toerama.

The contracts were purchased in four transactions at an average price of between R202.53 and R207.69 per Shoprite share. The highest price paid was R209.

A leveraged purchase such as this would typically be made by someone who is very bullish on the prospects for the company and expects the share price to appreciate materially.

It is not all that common for directors to leverage their exposure.

On Friday the group also announced that Wiese would finally exercise a cash-settled share-based payment, comprising one million shares, which was granted to him in 2003, and which expires on September 5, 2022.

This means the total value of the cash payment, which will be settled by the group, is R195.5 million (gross of tax payable).

The liability for this has been disclosed by the group in its financial statements every year. At the end of the 2021 financial year, the liability totalled R149 million and was included in payables. The group has no further cash-settled share-based payments outstanding.

In 2019, in the last dealing in Shoprite stock that involved Wiese, his investment entity Titan unwound a collar (hedging) transaction it had structured a year prior. The security arrangement over those underlying shares was terminated and 19 million shares were sold. The total value of that transaction was R2.5 billion.

This holding, via Thibault Square Financial Services, has allowed Wiese to wield control of the group.

The deferred shares have 32.3% of Shoprite’s voting rights.

The group in 2019 attempted to purchase these shares in a deal worth R3.3 billion, in order “to address the risk that the Chairperson’s interest in Thibault Square may be passed on through succession or disposal to a party who may not be aligned with the Group’s long-term strategy and direction”.

It proposed issuing 20 million ordinary shares in exchange for the deferred shares.

The group eventually “cancelled the transaction after more than 15% of ordinary shareholders indicated in writing that they did not support the proposed transaction in its current form and would vote against it”.

Wiese was narrowly re-elected as a director at the group’s AGM in November.

Only 50.11% of ordinary shareholders who voted on the resolution for his re-election voted in favour.

Those non-convertible, non-participating, no par value deferred shares only have voting value. It would be the biggest fraud (says a lot) in all of Wiese’s dealings ever if more than par value is paid to cancel those shares.

The shares are not entitled to a dividend and do not even participate in liquidation. What kind of fair value can even the most compromised independent corporate advisor attach? The present value of future cash flows = zero.