Cairo-based Afreximbank is backing the project with initial funding of $2m (around R28.5m) as is the Department of Trade and Industry.
By Suren Naidoo 7 May 2021  12:21

BHP spent just half a day’s profit looking for copper last year
Is SA a bit of a value trap following the events of the past decade?
Global dividends are back
CLICK THIS COMPANY MORE COMPANY NEWS SENS
BHP 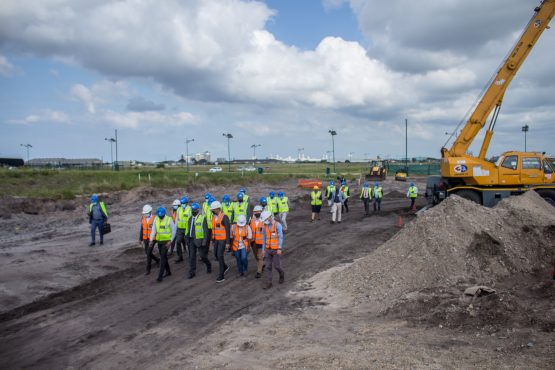 Grinaker-LTA has commenced construction on the first phase of the Nyanza Light Metals complex at the Richards Bay Industrial Development Zone. Image: Supplied

Plans for the plant were first mooted as far back as 2011 by businessman Donovan Chimhandamba, who is CEO of Nyanza and founder of private equity firm Arkein Capital Partners. He is also behind the Arkein group of companies.

Chimhandamba tells Moneyweb a Technical Services Centre is part of the R200 million first phase of the much larger Nyanza chemical complex that is planned on a 67ha site at Richards Bay IDZ.

The plant is set to ultimately represent an investment of R4.5 billion once fully developed. “Construction on the Technical Services Centre was launched today [Thursday]. It is expected to be complete and commissioned by the end of this year, when we will commence initial production of titanium dioxide pigment, which is widely used in the manufacture of products like paints, industrial coatings, plastics and even in foods and medicines,” he says.

“Nyanza is set to become a world-class titanium mineral beneficiation complex and will be developed in three phases over the next 36 months,” adds Chimhandamba.

He notes that most of the R4.5 billion investment will come in the second and third phases, when the main plant will come on stream.

His company has secured the backing of Cairo headquartered pan-African multilateral financier Afreximbank (African Export-Import Bank), which has a mandate of financing projects that promote intra-African trade as well as export industries.

“With funding arranged by our bankers, led by Afreximbank, we will commence with the construction of the second and third phases early next year,” explains Chimhandamba.

“Over the next 36 months, the Richards Bay IDZ will be a massive construction site as Nyanza ushers in the world class mineral beneficiation and chemical complex,” he adds.

Grinaker-LTA has been appointed as principal contractor to construct the first phase of the plant, which is expected to result in around 60 construction jobs. However, up to 1 200 construction workers will be involved in building the main plant.

Chimhandamba says once fully operational, the plant itself will employ around 550 people. It will source raw materials from Rio Tinto’s Richards Bay Minerals plant nearby, as well as from the Tronox mine in KwaZulu-Natal, the Kenmare Moma Mine in Mozambique and Highveld Steel’s mine in eMalahleni (Witbank), Mpumalanga.

Speaking via a video link during Thursday’s launch of construction, Afreximbank’s head of project preparation Zitto Alfayo, said the bank has already financed the plant’s first phase with $2 million (around R28.5 million).

“We have been involved with this project for about a year-and-a-half. We are proud of the milestone start of construction on the first phase… Afreximbank is Africa’s largest trade finance bank. Anything linked to trade, we are keen to get involved in,” he pointed out.

According to Alfayo, South Africa is a member country of the bank with the Government Employees Pension Fund (via the Public Investment Corporation) having a stake, together with other local institutions.

“The bank has been operating for 28 years and we are keen to support opportunities to advance Africa’s agenda, including opportunities in South Africa,” he said.

“Our funding of the Nyanza project is a bullet loan, not an equity stake … Nyanza is aligned to South Africa’s national government strategy around leveraging off the country’s mineral resources and beneficiation,” he adds.

While Alfayo did not indicate whether the bank has earmarked further funding for the project, Chimhandamba confirmed to Moneyweb that the bank is the lead arranger.

“We have a term-sheet with Afreximbank, regarding funding of around $350 million [around R5 billion] … As the project progresses from the first phase, the bank will be involved in funding for the next phases of Nyanza’s development,” he says.

“They will be involved as they are the lead arranger on the project,”  he adds.

Chimhandamba says around R200 million has already been invested in the Nyanza business over the last ten years, including developing the business concept and on pre-feasibility studies.

“Engineering group Hatch has done a lot of work for us and we are excited to finally get it off the ground … We have had incredible support on the Nyanza project from the Department of Trade, Industry and Competition [DTIC], as well as the KwaZulu-Natal provincial government and Richards Bay IDZ,” he points out.

“Nyanza has secured around R65 million in various incentives linked to investing in SA’s special economic zones from the department [DTIC] … They see the value in this beneficiation project,” he adds.

According to Chimhandamba, while South Africa is the second largest producer of titanium-bearing minerals in the world, the country imports most of its titanium dioxide pigment.

“This project represents an opportunity for South Africa to demonstrate that Africans can transform the continent from being a mere exporter of low value primary raw materials, to becoming an exporter of value-added products,” he says.

Good to see that someone else will lose the money here instead of SA banks and the PIC.

That is such a small minded way to think. They are investing in South Africa. May they mak

Brilliant and exciting project! Bring in the money and let it flow to KZN and South Africa. Thank you for your brilliant vision and value addition Afrexim bank. We appreciate this investment and vote of confidence in South Africa.

Why will this project work when Huntsman Tioxide closed their plant at Umbogintwini for economic reasons.

Love to know how they got it right to bypass the Environmental Protection Act! A pristine coastline is about to be severely compromised which will in turn negatively impact on tourism, the sea turtles attractions, etc. along the coast. Accounting for more than a third of the 5.18bn shots that have been administered globally.