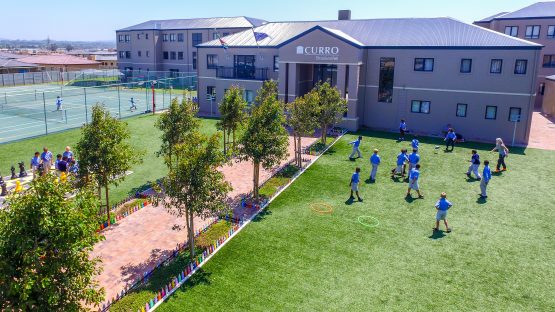 Curro’s push into the lower-fee private school market has been many years in the making. Picture: Supplied.

After the release of Curro’s interim results for the six months to end June 2018, CEO Andries Greyling said new greenfield developments and expansion investments are on the cards in townships including Gauteng’s Soweto, Soshanguve, and Mamelodi.

Curro’s push into the lower-fee private school market has been many years in the making. The 22-year-old company’s move into academy schooling prompted JSE-listed rival Advtech to do likewise; it has been seeking opportunities in this market since 2014.

Curro currently operates Curro Academy lower-fee private schools in townships including Protea Glen in Soweto, and Pretoria’s Soshanguve and Mamelodi. Protea Glen is one of the townships earmarked for a new campus under the new investment.

Greyling said Curro is responding to the demand from parents for quality and low-fee private education.

“Our biggest growth is the Curro Academy as we are the only players in some of those township markets, and we are seeing good growth [in terms of enrolments],” Greyling told Moneyweb.

He has the statistics to back this up. Private school education over the past four years has grown from 2% to 6% as a percentage of the total number of enrolled pupils in SA – about 13 million (from grade 1 to 12), said Greyling.

“We need more schools due to the pressures of urbanisation … The biggest challenge in SA is the number of schools that need to be built in order to reduce the number of learners in a class to focus on quality education.”

Greyling said Curro’s 80@20 vision is achievable given its three recent acquisitions of Gaborone-based Baobab Primary School, Douglasdale-based Cooper College, and Dot’s Learning Centre in Cape Town. The greenfield development of six new campuses will also build capacity, while five possible acquisitions could be concluded at the end of this financial year to December.

Curro, which is no stranger to raising fresh capital through a rights offer, might rely on debt utilisation to fund its expansion plans. Greyling said debt levels will be reasonably managed.

The private education group’s shares, which trade at a hefty earnings multiple of over 60 times, finished 0.58% lower on Tuesday at R31.05.

…… and what is the government saying to this?

Privately they dislike such a success story , especially by the private sector, which is showing up the poor performance of the public schools system and government as a whole . Surely they have a file for EWC of private schools allready circulating amongst the cadres who would love to own such a cash cow .

…. not much, still trying to understand why their approach didn’t work this well.

In a previous article I asked more or less the same question. “With expropriation without compensation, changes in the status quo of Universities along with fees must fall and so on….what “guarantee” does Curro have to maintain its sovereignty. I think the answer to this question is one that Curro doesn’t even want to contemplate.” Private sector builds up just to be destroyed be ANC.

Wow! These guys are willing to take big risks. I won’t be surprised if a group of people occupies a few Curro schools and demand free education for their kids. If their demands are not met, they will simply burn down the schools. In Vuwani Limpopo, members of the community went to court over municipal demarcation dispute but lost – so they burned down 24 schools. The “fees must fall” protest resulted in R750 million in damages. If that is the way they feel about their ANC elected government’s schools and universities, imagine how little they care for private schools.

Agree. If the construction mafia don’t destroy the projects before completion then they will be sitting ducks for all kinds of negative activism and arson.

Once the first one gets burnt down, will the free education idea kick in?

This is unlikely. Relatively well-off parents (including the trouble-stirring tenderpentrepreneurs) who send their kids to the private schools won’t stand for it.

… considering that i have ADT as well, can i now stop paying tax to the government ?

Agreed. Not entirely happy with this direction from Curro. I used to be very impressed with Curro’s operating model and the potential they had.. Think they have lost the plot over the past two years though.

One simple question to the useless anc government: If Curro could succeed in building brand new decent schools (with working toilet systems included) in the 22 years of their existence, why was it for the government in the same time frame & time period impossible to expand, upgrade and maintain the inherited / existing / new schools???????? – with an almost unlimited capital available (if the government budget was spent wisely & correctly iso blasting money on parties, stillborn SOE’s and non-productive state owned companies like eskom, SAL, Prasa, etc etc).

The answer is simple – connected cadre incompetent people in posts that they never should have occupied or even dreamed of to occupy, corruption to highest level in government, the gupta saga & company, state capturing and you can go on and on. It is high time that the anc is called to account for their +22-year slip-ups whilst the youth of today’s future is tattered & torned. What makes it 10 times worse is that the anc simply does not learn anything out of their previous mistakes but repeat it time and again to the cost of the taxpayer. The rest of the strong economical countries are actually laughing at us but the anc still does not get the message – they join in and also laugh.

Johannes you are now arguing like a rational, intelligent and educated person who can connect the dots. However, the ANC doesn’t work like that. All they care about is the fact that they are in power now (and no longer in jail) and they live the good life. The bigger picture is irrelevant to them. They don’t even try to be more effective than the previous government because they just don’t care. I think if they are honest with themselves they would admit that they are highly ineffective but it just doesn’t matter. It was reported in the news how millions of litres of raw sewerage are being pumped into the Vaal River by the Mfuleni Municipality at Parys in the Free State every month. The reason is that all the money meant for the upkeep of the sewerage works have been stolen over the years by ANC cadres. They don’t care that people will get illnesses like cholera, typhoid, diarrhoea and wildlife will die. All that matters is that Mr X is now driving in a new BMW X5 and his wife is diving in a new Prado.

Honestly i think this is a great idea, this same business structure that we would see from Shoprite, FNB, Nedbank, Capitec, Pick n Pay etc. I believe this is much a calculated risk which could pull in enormous revenue because it’s the same business structure that had made quite a lot of revenue/money for most of the JSE listed companies. This is what we would call educational float for Curro. Fears that local producers could be forced out of business.