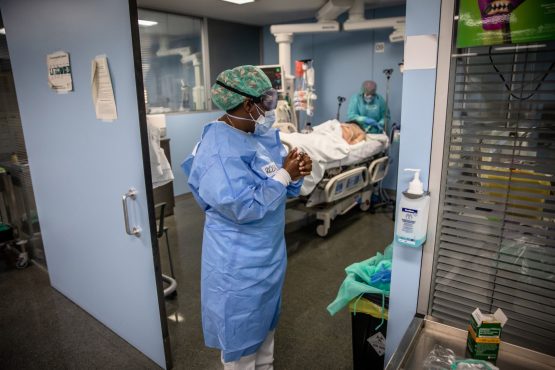 The economic impact of the various lockdowns left some people with no option but to cancel their medical aids. Image: Angel Garcia, Bloomberg

The decline in members and beneficiaries in 2020, even as the Covid-19 pandemic raged on, is not surprising given the economic impact of the various lockdowns.

Hundreds of thousands of well-paying jobs were lost and many people were forced to take salary cuts. Small businesses were particularly hard-hit and some people were faced with no other option but to cancel their medical aids.

Data from the Council for Medical Schemes published this month shows that open schemes lost over 64 000 members in 2020, with a decline of 105 775 in beneficiaries.

Out of the five largest schemes (DHMS, Bonitas Medical Fund, Momentum Medical Scheme, Bestmed Medical Scheme and Medihelp), only one – Bestmed – reported an increase in members in the year. Together, these five schemes comprise 86% of the open scheme market.

One can see the impact of job cuts across the economy in the data for restricted schemes.

In the banking sector, Bankmed and the Nedgroup Medical Aid Scheme together lost 3 000 members (a 2.5% decline from the prior year).

The number of schemes declined by a further three in 2020 as the trend of consolidation continued.

This trend has been in place for the last decade. The council says the number of medical schemes decreased from 144 in 2000 to 76 in 2020.

It’s not right, that people who lost their jobs, also lose access to their medical care because they can’t afford it.This is what the NHI will address and fix.

Under a universal healthcare system everyone benefits, not just a privileged few. The use of health systems will not result in hardship for individuals and their families.

The CEO of a JSE listed company and a domestic worker, will wait in the same queue and see the same doctor.

Oh Lordy, not often I agree with you. But here we are – you finally said something not entirely nonsensical.

Some issues such as access to medical care have a morality issue wherein the core existence of both individual and collective conscience within the human being as being more than equal to that of the animal kingdom. This understanding is being tested further and further each and every day by the top money-power drivers of pure and totally selfish evil. Mass murder is a definite and displayed component of their objectives.

The guavamunts could not even maintain the hospitals gifted to them in 1994 and this pie in the sky scheme of theirs are going to fly???
Like a brick yes.

Then nobody would want to be ceo of any company or bother to do anything of value if the rewards are the same as doing nothing… My friend… Little knowledge is very dangerous… Think hard about it.

Yeah, right! Like we all stand in the same queue at home affairs for an ID or passport around the block and round the clock hoping that you can see the one doctor whose pay is just the same standing up or lying down. Oh and pray Mr. Commy-Tzaar that his computer isn’t offline when you get to the front of the line to see him.

I can also see Cyril and Julius standing in that same queue behind the domestic worker and CEO.

And which taxpayers will pay for NHI?

As long as Julius and Cyril and their supporters are forced to use the same medical facilities as the rest of the plebs rather than flying off to Cuba or Russia or some other country for medical care. The other problem is the financing of the scheme. There is insufficient tax revenue and too few taxpayers to fund the scheme. The pool of taxpayers is dwindling as the ANC regime destroys the economy. This idea, while desirable, is not sensible or sustainable. It can only lead to a situation where nobody has access to any reasonable level of service – so in that way I guess it will achieve the objective of equality. Of course the exception will be the politicians who use taxpayer money (what’s left of it) to fly to foreign countries where the health services have not been wrecked by unsustainable policies to get world class medical care.

I agree wholeheartedly with the principle that every citizen should receive the best healthcare available for free and paid from taxes.

However, we can’t do this under the ANC or EFF.

We have seen the looting the happened around PPE earlier in the Covid pandemic.

Can you imagine the frenzied looting and riotus corruption that would commence once NHI starts?

So no. For now, private healthcare is the best option. At least until the state can demonstrate that they can actually run hospitals properly.

Dude you actually 100% spot on. I’ve lived under a system like that and it was phenomenal!

Yes and wait 10 hours before being helped, the comrade has clearly not visited a public day hospital. Probably use private health care.

That is exactly what I am thinking as well. The people paying 7k+ for premium medical aid options are far more likely to have the resources necessary to emigrate than the average joe on lower tier options.

‘Discovery’ used to be a medical ‘aid’. Trying to login to the disco website is difficult, if not impossible for a medical member.
Once the PAYING disco members are logged in? they face another wall to get around? the wave of advertizements for the NEW DISCO roberee bank makes members SICK!

Here’s a funny thought, my father and his father as well, never belonged to any medical aid. Lived to near 80 without taking vitamins, belonging to a gym etc.

Now, unless you cut out carbs, belong to a gym, have medical aid, take supplements, do yoga you won’t live beyond 13…..its pure madness and everyone seems blinded by this commercial nonsense

It’s when previous employees of Discovery admit that they had a price gouging policy for those on the basic hospital plan, you realize you have to just move on.

With a 34.4% unemployment rate, the first thing people trim when unemployed is insurance.

The problem with medical aids is that it guarantees payment to medical practitioners and hospitals. It means that the person receiving the treatment does not pay but payment is made from a pool of members and therefore unnecessary services are provided and the member does not complain because there is no direct financial effect. The result is above inflation increases in medical aid tariffs. I had this experience where I went to have a tooth filled and the dentist wanted to take x-rays but when the assistant told him that I did not have medical aid it suddenly wasn’t necessary. A similar thing happened with solar geyser installation. I had one installed when the Eskom subsidy was in place, and it cost as much as another one installed when the subsidy was taken away. So all the subsidy did was inflate the price. As soon as the user does not bear the direct cost of the service or product the price goes up. Anyway, that has been my experience.

Not any longer. I was hospitalised for Covid and belong to Discovery Classic Comprehensive medical scheme. Disco paid less than 50% of X-Rays, I was faced with a R6000.00 shortfall in hospital fees, The rental costs of the oxygen concentrator were not paid in full.

So I had to pay in just over R15K with a medical aid. Roll on NHI …

When is someone from Discovery going to get creative about solving these problems? You can’t have CPI + 4% inflation year-on-year and expect everyone to smile and pay up.

Why has Discovery not got a number of healthcare professionals on retainer? And when you need to see someone, as a member, you just book and you can go see them for free? Surely our contributions could cover that comfortably?

This nonsense about trying to shoehorn you into going to someone who is on their “list” doesn’t work in practice. When was the last time Discovery ever refunded anybody in full?