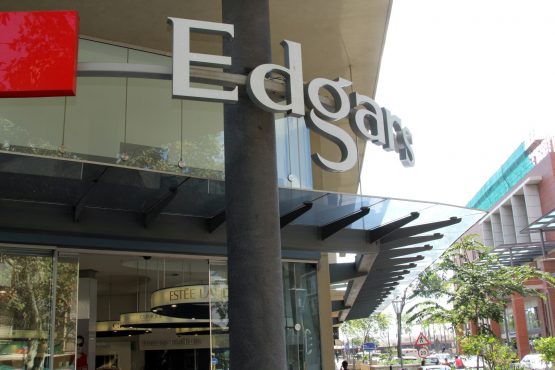 Edcon plans to reduce the size of its Edgars store in the Joburg CBD by a third. Picture: Moneyweb

As Edcon’s negotiations for R3 billion in “recapitalisation funding” from the Public Investment Corporation and other investors continue, the beleaguered retailer is reducing the number and scale of its stores nationwide.

Edcon plans to reduce the size of its Edgars store in the Johannesburg CBD by a third, but an ambitious revamp is on the cards for the dated store. This forms part of the retailer’s ongoing restructuring to take it back to profitability and convince investors that a leaner business is viable.

More store closures and downsizing are in the works, which forms part of a three-year plan to turn the group around. Edcon is set to close its big Melrose Arch store and reduce its footprint at shopping centres across the country, including super-regional shopping centres such as Mall of Africa, Eastgate and Gateway. The Edgars store at Melrose Arch is set to close. Picture: Moneyweb

Speaking to Moneyweb at the announcement of its Edgars Joburg CBD store revamp on Thursday, Edcon CEO Grant Pattison said the group had already closed around 115 mainly smaller stores across the country. Several stores are also being downsized.

He says it was “nonsensical” for Edcon to have had such large stores in some locations, where not all the space was being used or where it could be used more efficiently.

“We have to give up space by either closing poorer performing stores or downsizing some of our bigger outlets for Edcon to return to profitability,” he says. “In the last 18 months, Edcon has reduced its retail space by some 7%. We plan to continue to reduce our space nationally by 5-7% per year over the next few years.” Edcon CEO Grant Pattison says the plan is to save as many jobs as possible. Picture: Moneyweb

Pattison sounded confident when questioned about negotiations around securing new funding for Edcon’s recapitalisation. “There is no reason to believe anything will move off track at the moment and final negotiations are underway … The approval process is moving forward as one would expect. I am still very encouraged,” he said, following a meeting with investors in Pretoria.

He told Moneyweb that as part of its three-year turnaround plan, Edcon will focus on reducing losses over the first two years through the restructure and recapitalisation of the group, with a return to profitability by the third year. The R3 billion is required to fund the business over the next two years, and it is unlikely that further funding will be required.

“We want to run a profitable business, but I am also here to save as many jobs as possible,” he says. “For the business plan to work, the store closures and ‘right-sizing’ of stores as well as managing the process with our landlords is essential. We’ve limited job losses so far, with most employees being moved to other stores in the group.”

Edcon is SA’s largest clothing retailer, with some 1 200 stores. It employs around 30 000 permanent and casual workers. Add its clothing suppliers and other service providers, and Edcon supports over 100 000 jobs. The group opened its first store in the Joburg CBD 90 years ago. Pattison says the Joburg CBD is still important to Edcon and the revamp of its Edgars store here highlights its commitment to the city centre. He adds that the CBD is, however, no longer trading in the upper income bracket, so it made sense for Edcon to have a smaller Edgars store.

“We are repositioning the store in the market and are happy to partner with the owners of the building, SA Corporate Real Estate Fund,” he says. “They will be investing in a multi-million rand makeover of the building, and Edgars will remain anchor tenant with a new-generation store.”

Rory Mackey, MD of SA Corporate, says the JSE-listed real estate investment trust (Reit) will be investing R86 million in the overhaul of the building, which is currently valued at around R186 million. “The investment forms part of around half a billion rand we are pumping into various developments in the Joburg CBD.”

‘Not good for sector sentiment’

According to research by Keillen Ndlovu, head of Listed Property Funds at Stanlib, the Reit sector’s exposure to Edcon is limited to around 2%. However, he says Edcon’s woes are not positive for sector sentiment.

Ndlovu’s research shows that among JSE-listed Reits, retail-focused Hyprop, which owns Canal Walk Shopping Centre and Rosebank Mall, has the highest exposure to Edcon. Hyprop, Liberty Two Degrees and Resilient are the three Reits with the most exposure to Edcon.

Edcon has been grappling with a debt burden ever since it was bought out by US-based Bain Capital in a R25 billion private equity deal in 2007. In 2016, Bain exited and transferred ownership of Edcon to several of its creditors. Pattison was brought in last year to lead the restructuring and turnaround of Edcon.

Asked about negotiations with major landlords around a possible rent holiday or rent reductions, Pattison said that as this was an “unprecedented” move, he could not give any details on the discussions.

However, he says various options are on the table.

As the days go by I begin to fear the gloom that awaits government employees retirement monies.

SOE’s a looted to near or total bankruptcy, basically through state capture. Now the PIC is the next fruit ripe for the picking…. Where are the Unions when these things happen? It was AYO, now Edcon and who’s next? Group five? and, and, and…. South Africa wake up!!!!

At least with drastic, and I mean DRASTIC restructuring Edcon have a chance of recovery but SOE’s NO.

At some point the music will stop where either:

a.) the losses attributed to poor investments and fraud overwhelm the momentum of the new contributions to the fund; or

b.) The government gets serious about cracking down on the bloated civil service and starts to reduce the headcount, resulting in insufficient new money to service the current pension obligations.

It is a nightmare scenario, the type on which civil wars are built.

Property Funds should lower rental in malls and assist all businesses to fill spaces! Although it means reduce earnings and delayed pay-backs on investment it will assist the bigger picture of business and keep our suburbs alive and people employed