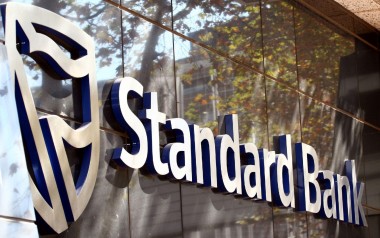 The board’s claims regarding adherence to global environmental impact and human rights standards were challenged for almost an hour. Image: Moneyweb

An unprecedented 32% of shareholders attending Standard Bank’s AGM on Thursday voted against the reappointment of chair Thulani Gcabashe.

While some shareholders expressed concerns about Gcabshe’s 18 years on the board, others said the vote might also reflect concerns about the board’s initial refusal to engage with a group of fund managers and shareholder activist organisations that had wanted to submit a non-binding advisory resolution to the AGM.

The board refused to submit the resolution, which related to the bank’s policy on financing fossil fuels. However, in an unexpected move, last week Standard Bank met with the three fund managers – Aeon Investment Management, Abax Investments and Visio Fund – along with activist group Just Share.

At the meeting, the bank confirmed its commitment to publish a climate strategy as well as short, medium, and long term targets for the reduction of its exposure to fossil fuels.

For the second year in succession the reappointment of auditors – KPMG and PwC – was opposed by over 20% of shareholders.

Some 31.95% voted against Standard’s remuneration policy, which has been adjusted to allow for the resetting of the conditions attached to the long-term incentive plan, the Performance Reward Plan.

The conditions were announced in March 2020 before the earnings impact of Covid was evident. In terms of the changes announced last December, vesting of the plan will now be at the sole discretion of the bank’s remuneration committee.

As a result of the over 25% negative vote, the board is required to engage with shareholders about their remuneration concerns.

Thursday’s AGM was another virtual-only affair and while it was disappointing that shareholders were required to submit their questions in writing, it was encouraging that the meeting enabled participation by shareholders from across the continent.

For no obvious reason, the bank required all shareholder questions to be submitted in writing, either before the meeting or during it.

This requirement is inclined to make for rather dull engagement as it allows the board too much control over the flow of questions and effectively prevents the asking of follow-up questions.

To Standard Bank’s credit, the questions were read out as written and there was no attempt to interfere with their content. Not all JSE-listed companies have complied with this legal obligation, most notably Zeder at its AGM last year.

Given the bank’s ambitions to grow its African footprint, the virtual format is essential to ensure that shareholders from across the continent are able to participate in the event.

At Thursday’s AGM these shareholders provided a valuable perspective on the group’s planned lending activities in Uganda, Tanzania and Mozambique.

Previously, in the absence of an opportunity to attend virtually, these shareholders would have had to incur hefty expenses to travel from various corners of the continent to Johannesburg.

Activist shareholders from civil society organisations in Uganda and Tanzania questioned the board about the bank’s proposed financing of the East African Crude Oil Pipeline, a planned 1 445 km pipeline that stretches from Uganda to Tanzania.

They raised concerns about the likely impact on local communities and wildlife of the pipeline, which is being undertaken by French group Total and China’s state-owned China National Offshore Oil Corporation.

Mozambique-based shareholders raised concerns about the Mozambique Liquefied Natural Gas (LNG) project in that country, which is also being driven by Total with some funding from Standard Bank.

For almost one hour of the 97-minute meeting, shareholders challenged the board’s claims that a swathe of reports from various consultants had provided the necessary reassurance that these projects were adhering to global standards relating to environmental impact and human rights.

Community representatives wanted to know which communities had been consulted by these consultants.

Bizarrely one recent report on Uganda could not be shared with the Ugandans unless the consultants approved such sharing.

No room for denial

Aeon Investment Management’s Asief Mohamed described the engagement as useful and commended Standard Bank for listening to the concerns. “There’s little doubt that they’re looking at these issues and now, because it has all been put into the open, they’re going to have to be razor-focused in dealing with them,” said Mohamed.

He said that in future if there were problems it would not be possible for the board to claim it was not aware of the extent of the issues.

Active Shareholders’ Mike Martin also said the meeting was extremely useful for shareholders. He noted that in his chair’s statement Gcabashe had acknowledged that “ESG considerations have come to the fore and all companies must tie performance to the well-being of society and the natural environment”.

Martin said the issues raised by the activist shareholders should be seen in the context of Standard Bank’s own statement that “climate change constitutes a real threat to the group … There is a further reputation risk for banks invested in oil or coal.”

Martin said that given the recent developments it was ironic that the annual report had noted: “The expectations our stakeholders have of us are changing radically and quickly.”

If ESG is ‘front and center’ for Standard Bank then that would make them ripe to take them to court for false advertising.