Power utility asked Matona and the financial director to ‘step aside’ while an inquiry into its business is conducted.
By Andre Janse van Vuuren, Bloomberg 12 Mar 2015  15:41 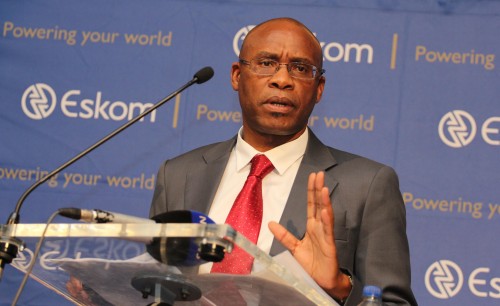 Eskom’s six-year bond yields climbed the most in a month after the state-owned power company suspended its chief executive officer and three other senior officials.

Eskom asked CEO Tshediso Matona and the financial director to “step aside” while an inquiry into its business is conducted, Chairman Zola Tsotsi told reporters in Johannesburg on Thursday. Yields on the company’s dollar bonds due January 2021 jumped 21 basis points to 6.35% by 2:45 pm local time, the most since the day before President Jacob Zuma announced on February 12 measures to help the company meet demand for power. It jumped to as high at 6.93 percent immediately after the announcement of the CEO’s suspension.

Eskom, which supplies 95% of South Africa’s power, is facing a 225 billion-rand ($18.4 billion) funding gap as it builds new plants to ease electricity shortages. Zuma pledged support for Eskom, including a bailout of 23 billion rand in three payments. That helped the yield on the 2021 bond fall to 5.93% on February 26.

The government needs to “make it very certain that this process will not affect the delivery of the 10 billion cash injection promised by June,” Elena Ilkova, a credit analyst at Rand Merchant Bank, the investment-banking unit of FirstRand Ltd., said by phone, referring to the planned first tranche to Eskom. “That would be a real concern for bondholders.”

Matona’s suspension comes six months after he was appointed and as the company implements rolling blackouts to save the grid from collapse. Tsotsi said there is “no intent or suspicion of wrongdoing” in the decision to suspend the executives and start an inquiry.

This crisis management by the board of Eskom is like sacking the captain of a sinking ship. It does nothing to stop the water gushing in.